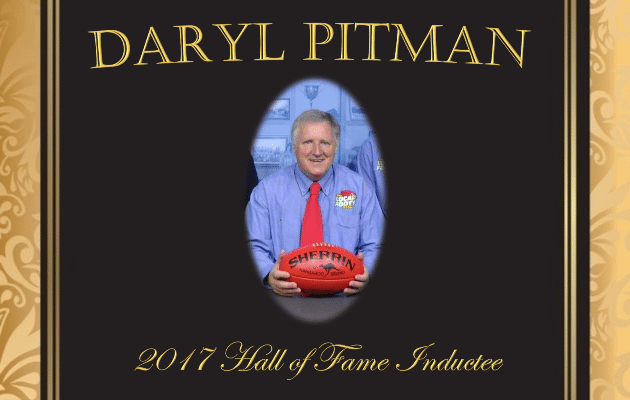 Aptly, it was community footy to which he was drawn and to which he has richly contributed.

In inducting Pitman to the Hall of Fame, the SFNL acknowledges his vast contribution to the league.

SFNL media personality, Ian Dougherty pays tribute to Pitman and the extent to which he has shaped the league’s current media environment.

“A pioneer of media in community football, and much of what we do in the media team today is a result of all your efforts early on,” he tells Pitman.

Hearing Pitman reminisce about the pioneering days as a Southern FM commentator makes you aware of a couple of realities.

One is the determination he and his fellow presenters had to get the match of the day to air, no matter the obstacles present.

Also evident is a level of risk unimaginable in today’s world of occupational health and safety.

Covering a final at Springvale, the broadcast team was perched in a box upon a scaffold, with water up to their ankles and electrical cables everywhere.

"We did it under some really testing and challenging conditions," notes Pitman.

On other occasions, getting the game onto the airwaves relied on persuasion.

In those early times a phone line was essential to deliver the commentary to the Southern FM studio. That sounds simple until you discover some clubs didn’t have phones.

Pitman recalls how neighbouring households were called into broadcasting service.

“We'd buy the owners a couple of bottles of wine for helping us out and we'd tie up their phone for three hours."

Pitman’s association with Southern FM dates to the origins of the station in 1984.

Today’s match-day broadcasts are undoubtedly safer and more comfortable for the presenters, and technology has evolved.

But from those humble beginnings our league’s association with Southern FM continues 33 years later.

In the winter months, that program included a segment devoted to the SESFL, a forerunner of the SFNL.

Southern Sport ran for a decade by which stage the league was known as the SFL.

He was the producer and editor of the SFL Record from its foundation in 1992. This gave him freedom to shape the Record and to focus on promoting local footy.

Leader Newspaper sports editor, Russell Holmesby got Pitman onboard from the start of the SFL days.

Pitman continues to cover the SFNL in the Leader.

Another medium into which Pitman drew the league was television.

The Southern Footy Show hit the screens of Channel 31 viewers in 1997, and it continued to tell the stories of the SFL, its clubs and people until the end of the 2008 season.

Pitman explains how this much-loved show evolved into The Local Footy Show.

“It transpired that AFL Victoria wasn’t keen on the leagues having their own shows.”

The Local Footy Show went beyond the single-league focus of The Southern Footy Show.

"If it was to do with local footy and it was to promote local footy, we'd do a story on it, regardless of what league it was in," Pitman says.

But he points out the Southern League was always an important focus.

“We did quite a few southern games and always did stories on what was happening in the Southern Footy League.”

Sadly, The Local Footy Show wrapped up at the end of the 2016 season, when the Federal Government decided to no longer grant Channel 31 space on the broadcast spectrum.

Pitman has long recognised the significance of media coverage to the health and success of footy in the South.

As SFL Media and Communications Manager in 2008, he noted in the league’s Annual Report the contribution media makes.

"A strong media presence becomes increasingly important for our league as we endeavour to grow and establish an identity as a key sporting organisation of relevance and stature in our community."

He explained recently that some people at other leagues looked down on the SFL, and he was determined to alter such perceptions.

“We always tried to promote the Southern Football League in the very best way we could,” Pitman says.

The SFNL has reaped the benefits of this hard work and continues to expand and modernise its media department.

Pitman’s involvement in community footy and his love of the game began as a youngster in Victorian country town, Hamilton.

His family was strongly connected to the Hamilton Football Club where a number of them, including his father, played.

He wore the club’s jumper with pride that day, but not as a player.

Pitman was one of a team of mascots resplendent in Hamilton gear.

“The whole town was there, and more. It was standing room only,” recalls Pitman.

It was the only occasion on which Hamilton and local rival Imperials clashed in a grand final.

Hamilton won the match and Pitman dreamed of pulling on the club’s jumper as a player.

Then, a family move brought him to Melbourne.

In 1965 he began playing with Caulfield in the Federal Football League, winning an Under 16s best and fairest a couple of years later.

At just 17, Pitman made his senior debut.

By age 24 and by then at East Malvern Football Club, his playing career was curtailed by an ongoing ankle injury, along with work and family commitments.

But that was never going to terminate his involvement with local footy.

As a child, a Christmas gift of a typewriter from his parents, allowed him to combine his obsession with sport with an interest in writing.

He practised his commentary skills, calling horse races in which the runners were marbles.

Since embarking on his media career, Pitman has received many accolades.

These include being named a Life Member of the SFNL, and receiving Outstanding Contribution to Community Television by an Individual at the Antenna Awards.

All these honours are important to Pitman, but there is a deeper significance to his induction into the SFNL Hall of Fame.

The letter advising him of this honour arrived just weeks after the loss of his wife Helen.

She was “always so encouraging” and worked hard behind the scenes.

Pitman credits her with achievements such as boosting the social media profile of The Local Footy Show.

“I consider it a very great honour, and I’m very sad that my wife’s not here to see it,” he says of his induction.