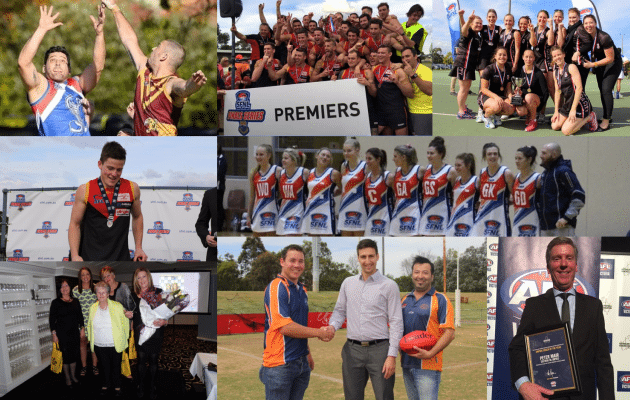 Tweet
Season 2015 is a year that will not soon be forgotten. It was a year of many firsts for the SFNL and a number of huge stories dominated the headlines. Our Media Officer Will Hunter reviews the year with a countdown of the 20 biggest news stories of 2015.

To play 200 games of footy is a great achievement. But to play double that amount is an extremely rare occurrence. But Doveton Eagles stalwart Tony Mertis achieved that feat back in Round 13 when he ran out onto Power Reserve for his 400th game for the club. Other major milestones in 2015 included Keysborough’s Cory Wilkinson (300 games) and Dandenong pair Michael Lawrence (300 games) and Steven Davis (250 games)

The Keysborough Football Netball Club transferred from the Casey Cardinia league during the off-season and the entire SFNL community were keen to see how they would fare. The Burras travelled to Power Reserve to make their eagerly-awaited Southern league debut against the Doveton Eagles in Round 1, and despite their talented list they didn’t have it all their own way. They struggled to adjust to Southern league footy early, before coming from behind to post their maiden SFNL victory, running out winners by 27 points. Once they found adjusted to Southern league footy, Keysborough made a big impact in its first season in the SFNL.[/caption]

The Round 14 Division 2 clash between Skye and Keysborough was prematurely ended after Burras’ veteran Cory Wilkinson suffered a horrific leg injury shortly after half time. The match was abandoned after a 45-minute delay while paramedics took Wilkinson to hospital. Another serious injury that received plenty of attention was that of Chelsea Heights young gun Chris Moloney. Moloney, a 2015 Interleague rep, fractured his neck in Round 1 and although he has had to endure a lengthy rehab stint, he is likely to make a full recovery. The club hosted a fundraiser for Moloney in July, and the SFNL community at large were generous in their support.

The boys from Meade Reserve certainly made a habit of close finishes this year. Twice this year they have managed to pinch wins with the last kick of the game. When the Clays hosted St Pauls in Round 11, halfback Andy Ray proved the match winner, sending a 50m bomb from downtown through the sticks in the dying seconds to seal victory by the barest of margins. Five weeks later, Cory Wilson lived out every boy's dream by drilling the winning goal after the siren to give the Clays a five-point win over St Kilda City at the Peanut Farm. Talk about close shaves!

Cory Wilson is mobbed by his Clayton teammates after kicking the match-winning goal after the siren.[/caption]

The Saints are marching back to Linton Street with the Victorian Government pledging $12 million in funding to the Moorabbin Reserve Redevelopment project. Sunday’s announcement will see the SFNL, South Metro Junior Football League and Sandringham Dragons all become co-tenants of the upgraded Moorabbin Reserve complex alongside St Kilda Football Club.

There wasn’t much to cheer from an on-field perspective at the AFL Victoria Metro Championships this year, save for terrific performances from two Southern league guns Jackson Peet (Dingley) and Jarryd Allan (St Pauls). So impressive were the duo, that they were selected to represent Vic Metro in a one-off rep game agains AFL Queensland in Burpengary, north of Brisbane, in June. And Peet and Allan didn’t disappoint in the Big V jumper, helping guide Vic Metro to an 84-point win. St Kilda City’s Goal Attack Simone Stuart proved the Grand Final hero with the netball equivalent of a goal after the siren. With scores level in the dying seconds of the Netball Division 2 decider, Stuart had a shot to win the game a split second before the final hooter sounded. She netted it, handing the Saints victory over reigning premiers Heatherton by the barest of margins. The win was St Kilda City’s first netball premiership in any division, and Stuart was awarded the Best on Court Medal for her efforts.

In 2012 Black Rock sat winless at the bottom of Division 2 and seriously struggling off the field. Just three seasons later and those dark years are a distant memory as captain Cory Durie and coach John Burke hoisted aloft the 2015 Division 3 premiership cup. Their flag marking a stunning turnaround for the club, who have gone from fighting for their very survival to Division 3 Club Champions and returning to Division 2 in 2016.

Black Rock hoist the cup after proving too good for Mount Waverley.[/caption]

The League will have two more teams in 2016 after it was announced that Port Melbourne Colts and Lyndhurst Lightning will be entering into the SFNL. A transfer request was officially approved in October, paving the way for the Port Colts to move across from the Western Region Football League. In November it was also announced that the SFNL Board had approved a new club application from Lyndhurst, allowing the start-up senior club (previously only a junior entity) to enter into Southern league ranks.

A massive crowd was on hand as the Fevolution came to Edinburgh Reserve in Round 4. The former Carlton and Brisbane bad boy donned the royal, red and white strip of the Sandown Cobras for a one-off match against Lyndale that also saw the opening of their brand-new pavilion. Despite a pinched nerve in his back that required injections, Fevola still wowed the crowd and terrorised the Pumas’ defenders (minus the injured Alex Kerr) with his scintillating marking and deadly-accurate goalkicking. Fev finished with a dominant 8.1 including the match-winner to help the Cobras over the line by just four points.