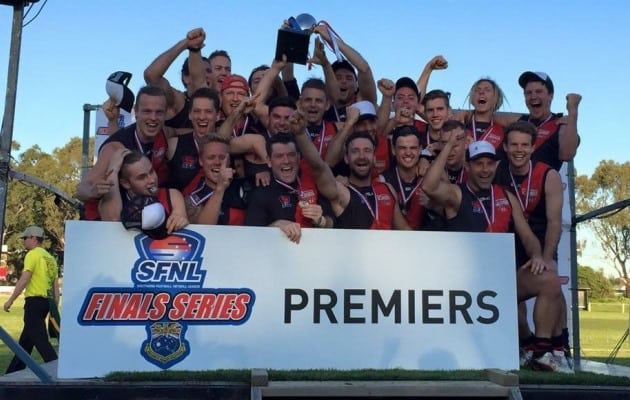 Joe Kriegar was involved in the Grand Final action from the first ruck contest and starred throughout the day, helping Black Rock record a 13-point victory against Mount Waverley. Kriegar was a worthy recipient of the Meneilly Medal for best on ground.

The Jets led for almost the entire contest, although it was the Mountain Lions’ Michael Kinsella who had the first goal on the board, despite kicking into a strong breeze.

It was an entertaining match and although Black Rock was on top, the Mountain Lions were still in with a chance in the final term.

When Chris Jeffries booted a goal on the run to cut the margin to 20 points a couple of minutes into the fourth quarter, the game was alive.

However, Brendan Stephenson bobbed up shortly after, marking in the Jets’ forward line and kicking accurately.

To the Mountain Lions’ credit, they quickly responded with Cameron Kirkup snapping a goal.

Lachlan Quirk kicked the Jets’ last major for the day at the seven-minute mark. Black Rock then had to withstand pressure from Mount Waverley.

The Mountain Lions goaled through Patrick Kinsella and, when Ben Beecroft marked shortly after, there was still hope. However, he kicked a behind.

Mount Waverley was 21-points behind and time on was imminent. Still the Mountain Lions strived to bring about a dramatic comeback, but squandered their chances. By the time Patrick Kinsella goaled again, it was too late.

Black Rock put down a good foundation for its win, skipping out to a 27-point advantage by quarter time. But with the aid of a strong breeze, it was hard to know whether or not Mount Waverley would be able to achieve a similar level of dominance in the second term.

Unfortunately for the Mountain Lions, backman Simon Jacobson was hurt during the opening quarter and was unable to take any meaningful part in the remainder of the game.

When the Mountain Lions gathered at the quarter time huddle, coach Jarrod Wilkin stressed the need for them to apply more pressure at stoppages. He also urged them to use what he considered was a four-goal breeze to establish a half time lead.

Mount Waverley was able to close the gap in the second term, but still trailed by 11 points at the long break.

The division’s second-top goal scorer, Mount Waverley’s Luke Galle, made an early impact in the second half. He drilled a goal, cutting the Jets’ lead to five points.

Galle surprisingly played at fullback early in the game, where he was matched against the dangerous Adrian Lane.

Galle’s goal proved to be the only score of the third term for Mount Waverley, as the Mountain Lions struggled to deal with the wind and the Jets’ backline.

Black Rock managed three goals for the quarter, with a couple of those coming from the boot of Simon Taylor. This pushed the Jets’ advantage to 26 points with a term to go and they ensured that this was enough, applying fierce pressure in the final term.

Taylor was the leading goal scorer for the premier with three. Jay Williams was named the Jets’ second best player, and kicked a couple of crucial goals early in the game.

Brenton Henry was another excellent contributor for Black Rock, clearing the ball from dangerous positions and totally blanketing Kirkup. His coach, John Burke described Henry’s game as “an absolute blinder”.

For the defeated Mountain Lions, skipper Rich Mathers was their best contributor. Patrick Kinsella was the only multiple goal scorer for the side with two.

Cliff Aikman provided some drive for Mount Waverley after proving his fitness and returning from injury.

Wilkin worked his way into the game after moving into the backline, but was starved of opportunities early in the forward line.

He praised the efforts of his team. “We gave it everything. Everyone played their heart out, we were just not good enough on the day,” said Wilkin.

The Mountain Lions’ coach acknowledged the quality of the opposition. “Black Rock were the best team all year and deserved the win,” he said.

There is no doubt that the Mountain Lions will do everything in their power to go one better next season.

Winning coach, Burke expressed pride in his team and felt the game was played in the right spirit. “It was a really good game of football and to their credit they kept coming back,” he said, emphasising Black Rock’s respect for Mount Waverley.

Burke will not continue as coach next season, and believes it is time for someone else to take charge as the club continues its journey.

Congratulations to the Jets and good luck in Division 2 in 2016.

To purchase photos from the big day head to  www.photogenix.com.au.