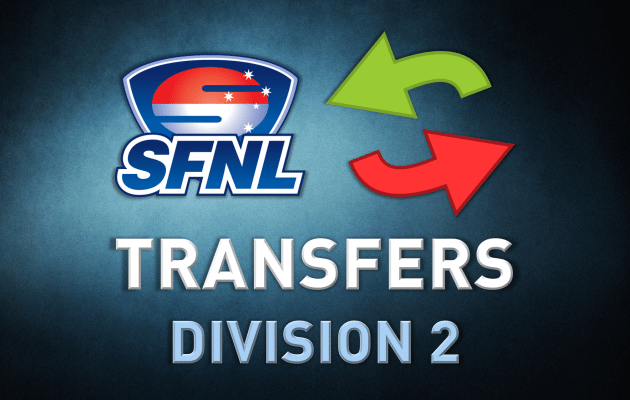 Tweet
Keep up to date with all the latest Division 2 player transfers by club below.

DIVISION 1: Check out rolling coverage of all Division 1 transfers here.

The Caulfield Bears have further strengthened their list with transfers lodged for gun half back Noah Answerth and key forward Cam Roughead in March. Oakleigh Charger Answerth was last year touted as a serious chance to be drafted, but a significant back injury ruined his season. A former Caulfield junior, Answerth will still chase his AFL dream as a top-age TAC Cup player this year, and could play a few games for the Bears during the season subject to his Chargers commitments. Meanwhile, Roughead, the younger brother of Hawthorn skipper Jarryd, joins the club from East Malvern and will significantly bolster the club's big man stocks and give the Bears another viable goalkicking option. In addition, Caulfield has announced the return of veteran forward Matt Murray following two seasons in the Warrnambool region, as well as the key signings of Yackandandah jet Will Hooper, Yarraville Seddon star Cam Vincent, Lara big man Anthony Trigg and former Northern Territory FL Best & fairest winner Blake Miles. The Clays have welcomed several new and old faces to Meade Reserve, including Cora Lynn premiership player Josh Llerena and former Prahran Assumption small forward Peter Bell. The 21-year-old Llerena has already built a sterling football resume and will significantly bolster the Clays' midfield stocks, while Bell, originally from Mildura, was a premiership player with Wenthworth in 2012. Former Clays 2010 premiership player Jack Coutts returns to the club, as does versatile big man Jack Gavin, who has spent the last couple of seasons with Cheltenham - a stint that included a Reserve-grade premiership last season. Meanwhile, the club has also announced the signings of ex-Lyndale playing assistant coach Ordell Buntine and Doveton Doves young guns Luke Coad and Declan O'Donnell.

The Eagles have followed their premiership success by announcing several massive signings for 2018. Nick Battle, the brother of St Kilda forward Josh Battle, came through the Dandenong Stingrays TAC Cup pathway before spending time with Casey Scorpions and Frankston VFL teams. The 22-year-old was named on the wing in the SEFNL Team of the Year this year, and will bring an exciting mix of pace and skill to Power Reserve. Meanwhile, veteran Ryan Hendy has forged a reputation as one of the most decorated SEFNL players of the last decade. A premiership player, B&F winner and leading goalkicker on several occasions with the Doves, Hendy has signed on as a playing assistant coach alongside former Eagles premiership player Nathan Wilson. Josh Henry also joins the club from Ferntree Gully and will add depth to the side's midfield, while ex-Dandenong Stringrays and Noble Park star Caleb Millman will bolster the Eagles' key position stocks. Diminutive speedster Ricky Johnson, an SFNL Under 19 representative that made his senior debut with the Eagles at just 16 years of age, also returns to the club after a season at the Doves. While the Vampires are yet to lodge transfers for an experienced senior player, the club has gone down the youth path and bolstered its list with a number of talented footballers from its junior program, as well as the Beaumaris and Caulfield Bears Junior Football Clubs.

Veteran ruckman Matt Thorneycroft will bolster the Hammers' big man stocks in 2018, after making the switch from Cheltenham during the off-season. Thorneycroft, who will reunited with former Chelt teammate Pat Bolger at Petersen Street, has plenty of Division 1 Senior experience under his belt, and was a key component in the Rosellas' reserves premiership last season. Meanwhile, the club have added several players from MPNFL clubs, including Seaford, Hastings and Crib Point, which will add to the club's depth. Meanwhile, a trio of players, including key defender James Feather and 2010 premiership player Chris Grove, have switched their allegiances to Ashwood.

After a disappointing on-field year in 2018, the Bulldogs had added some additional experience to its list, while retaining the majority of its playing group. Former Mordialloc midfielder Chris Langdon, who played 14 senior game last year, including the Grand Final, will have a big impact in the Doggies' engine room, while Hampton Rovers veteran Ed Turner brings plenty of class and big game experience as a two-time Grand Final BOG. Cohuna Kangas' Brett Collins and Doveton Doves' Kyle Hendy also loom as a big ins for Highett. Keysborough were been the most active in the early stages of the November transfer period, signing a host of players to bolster its list as it contends for the premiership in 2018. Among them are Mt Eliza duo James Anwyl (ex-Frankston VFL key defender) and Aaron McIlroy (utility with X-factor), as well as EFL goalkicking machine Matthew Carnelley, who has twice booted 100 goals in a season and was crowned AFL Victoria's Senior Metropolitan Community Football Leading Goal Kicker in 2016 with 108 majors - seven clear of Mount Waverley's James Gough. Carnelley will form part of a devastating forward duo alongside Bennett Medal runner-up Chris Bryan, who has recommitted for next season. Shaun Dekkers also returns to the club after a season at Hampton Park. The Burras have also lodged a swag of transfers for players from a few South East Juniors clubs, and in particular Narre North Foxes, which will ensure they field a competitive Under 19 side this season. The Mountain Lions have suffered four massive losses ahead of the 2018 season. Champion Jarrod Wilkin has retired, 2017 Bennett Medallist Jackson Smith will follow his dad, premiership coach Nick Smith, across to Werribee Centrals and explosive midfielder Andy Mathers is seeking a transfer to Karingal. The trio were the top three place getters in the club's 2017 Best & Fairest. In addition, a transfer has recently been lodged to facilitate champion goalkicker James Gough's move to EFL Div 4 outfit Fairpark (formerly Eastern Lions). Ben McLeod, a regular senior player with Sebastopol in the strong Ballarat league, looms as a handy pick up for the 2016 Division 3 premiers. Murrumbeena has pulled off one of the biggest recruiting coups of the November transfer period by signing former St Pauls premiership players Luke James and Jay Bruno in a move that could land the 2017 Division 2 runners-up their first premiership since 2003. The mercurial James is a two-time league leading goalkicker with the Doggies, and booted seven in a sublime performance in the club's 2013 Grand Final triumph, cementing his status as a big game performer. A goalkicking machine that's is capable of incredible feats, James topped 90 goals in a season five times between 2007 and 2012, including a whopping haul of 148 majors with Kilcunda Bass in 2011. While perhaps now in the twilight of his decorated career, the spearhead will no doubt prove hard to stop in Division 2 next year. Likewise Bruno, who is perhaps best know for his exploits as one of the key components in the dominant St Kilda City team of the late 2000's, which included a Division 1 Senior League B&F in 2009. The midfield ace also won a Nepean league medal with Rye in 2014 after playing in the St Pauls' 2013 flag. Lachlan Batt has departed the club to take up a senior coaching role with Black Rock, while Josh Wright has followed his father Steve across to Meeniyan Dumbalk United.

The Beena's raid on McKinnon Reserve has continued into the new year, with Doggies captain Harley Ambrose sensationally crossing to Murrumbeena. The star midfielder was hampered by injury problems in 2017, but has been a proven performer over several seasons, earning selection in the SFNL's Interleague team in 2014 and 2015. St Pauls' veteran and 2013 premiership player Owen Lewis will also be joining Ambrose at the Beena Arena. Skye captain Aaron Pacey is off to Tyabb and will assume the role as the club's senior coach, while big-bodied midfielder Jordan Thomas is one of several senior players that are set to follow Pacey across to the Yabbies. The club has may be light on for senior inclusions, but have picked up several players from junior clubs in the area.