Tweet
Keep up to date with all the latest Division 1 player transfers by club below.

DIVISION 2: Check out rolling coverage of all Division 2 transfers here.

The Demons were quiet on the transfer front in November, however, they have been active in the new year, securing the services of dynamic goalkicker Steve Murray. The electric half forward previously spent three seasons with VFL clubs Northern Blues and Port Melbourne, before returning home to Wodonga last year, where he booted 41 goals in 18 matches. Murray is an elite mark for his size, and with his outstanding footy smarts and goal sense, he will cause plenty of headaches for opposition defences in 2018.

The recently promoted Heighters have been industrious early in the off season, signing a number of key players as it looks to make an impact upon its return to the SFNL's top flight. St Kilda City key position star Harry Czarneki finished second in the club B&F last year, and will significantly bolster Chelsea Heights's backline, while his Saints teammate Dylan Sloan will add to the club's midfield depth. Daniel Campisano also joins the club with a strong football resume across the VFL, Essendon District and Eastern leagues, and will combine key position roles with assistant coaching duties.

Sandringham VFL Vice Captain Myke Cook requested a transfer to Bonbeach in November after nominating the Sharks as his back-up club for 2018. Cook played one game for Cheltenham in 2017. A trio of Under 19 players in Benjamin Clarke-Henry, Lawson Daniels and Nim Sarig also signalled their intentions to play elsewhere, while the Rosellas' 2017 Rookie of the Year Award winner, Will Edmunds, will call the Den home this year. On the flipside, the club have announced the key signings of 2016 Beaumaris premiership player Drew Kelly and former Murray Bushranger and GWS Academy player Billy Robertson for season 2018.

After a quiet November, the three-time reigning premiers pulled off a big coup by signing former Swan Districts ruckman Simon Hallsworth. The experienced big man has had stints at several Western Australian clubs including Harvey Brunswick Leschenault, Mandurah Mustangs and Mukinbudin, but after moving to Melbourne in 2016, has played the last two seasons at East Ringwood and Wagga Tigers. Hallsworth is a perfect replacement for Chris Morgan, who hung up the boots after last year's premiership triumph, and with his state-level experience, expect the big fella to have a real impact in season 2018. Young Cheltenham centre half forward Will Edmunds has also been lured away from Jack Barker Oval, with the Rosellas' 2017 Rookie of the Year award winner shaping as a handy inclusion. However, the club has lost energetic key forward Cal McQueen, who has moved up to Queensland. 'The Dream' is a three-time premiership star and has topped the league goalkicking in the last two seasons, and his absence will leave a significant hole in the Dingoes forward line. Meanwhile, the club has also submitted transfers for several young guns from its junior program, which will boost numbers in its Under 19 side ahead of the season.

It will be a new look East Malvern in 2018, with several star Panthers set to wear different colours. Towering ruckman Matt Terech and diminutive forward Sam Lonie were announced as key signings at Seaford under ex-SFNL Interleague coach Ben Murphy in November, while midfield stars Ed Sim and Jimmy Dowling will cross to Whitehorse Pioneers and Yinnar respectively. Additionally, 2016 SFNL Interleague ruckman Brad Neurath has accepted a role as playing assistance coach at South Belgrave. However, the club has secured the services of a couple of very handy recruits in Steve Brewer and Marc Lonergan. The experienced Brewer enjoyed a stellar six-year career as a rebounding half back flanker at Port Melbourne, which included a premiership in 2011 and selection in the VFL Team of the Year in 2009. Since retiring from VFL footy after the 2012 season, Brewer moved to Greenvale in the Essendon District league, where he has played in three Premier Division Grand Finals for one flag, and represented the EDFL at Interleague level four times. Meanwhile, Lonergan, a two-time senior premiership player with North Heidelberg and brother of Geelong Cats defender Tom Lonergan, was selected at centre half back in the 2017 NFNL Division 2 Team of the Year an will significantly strengthen the Panthers' spine. Strathfieldsaye premiership star Brad Stringer, the brother of current Bomber and former Western Bulldog Jake Stringer, will also join the Panthers, along with Kyabram reserves premiership defender Brady Corso and Wagga Tigers' 2017 Coaches Award winner Dylan Morton.

Brewer in his Port Melbourne days.[/caption]

New coach Mick Brown has wasted no time in luring former De La Salle guns Matt Moore and Harry Haley across to Ben Kavanagh Reserve. Former Casey Scorpions full forward Moore spent one season at Kilcunda Bass after several years spearheading the attack at Waverley Oval, while Haley, a tough inside midfielder, won De La's Reserve's B&F in 2016 before crossing to North Ringwood. The pair will be reunited with a several other former De La teammates in red and white next year, including gun midfielders Aaron Kneebone and Ben Humphrey. Meanwhile, one of the favourites of the SFNL Media Team, Michael 'Buddy' Spohn, has requested a move from Black Rock to last year's Division 1 runner-up. The Californian-born utility only picked up the game in 2013, and has represented his native United States at the AFL's International Cup. The Jets' 2015 premiership star was this year named in the Division 3 Team of the Year and finished fourth in the Flack Medal, a remarkable effort given he missed five matches due to IC17 commitments.

Several big name players will be donning different colours next season, including premiership stars Dave Velardo, Pat Carroll and Daniel Saldanha. Star midfielder Andrew Howison, a Meneilley Medalist and Oaks' Best & Fairest winner in 2015, will call Dromana home in 2018 alongside Kiwi compatriot and Sandringham Zebra Will Gregson. Meanwhile, former Under 19 guns Brody Ledder (a key defender that finished fourth in the 2015 Sparrow Medal) and John Walker (a key forward that earned selection in the 2015 Reserve Grand Final team) will both return to Princes Highway after stints at St Kevins and Noble Park respectively. The clubs has also secured the service of former Gippsland Power midfielder and one-time draft hopeful Nick Hogan, who has also been listed as a local interchange player for North Melbourne's VFL side. A clearance for talented young Bentleigh ruckman Saf Balic was lodged the week before Round 1.

The Colts were quiet on the transfer front for much of November and February, however, several incoming transfers have been lodged from mid-Feburary onwards. Included among them are two high-profile stars in St Pauls jet Callum Cathcart and former Essendon speedster Andrew Lovett. Cathcart, 23, is well know in Southern League circles as a mercurial goalkicking midfield/forward and when on song is a bona fide match-winner. A SFNL Interleague representative in 2016, Cathcart finished equal sixth in Ellis Medal voting that year before spending last season on Sandringham Zebras list, but the recent demise of the VFL Development competitions means that he will play more games in the SFNL in 2018. Lovett, who played 88 games with the Bombers between 2005 and 2009 and won the ANZAC Medal in just his third AFL game, joins the club from North Heidelberg, which follows stints at Sorrento, Red Cliffs and Macleod. Meanwhile, gun De La Salle forward Tom Nicholls and Caulfield midfielder Sean Gunning will also make the switch to JL Murphy Reserve this season. A trio of premiership-winning Colts are also on the move, with ruckman Nathan Spinks and bookends Tim Hanly and Jackson Brown lodging transfers to Chirnside Park in November.

There was plenty of movement at the Peanut Farm in November, including the return of star Aaron Purvis after a year at South Belgrave. The 27-year-old is a previous winner of the Ellis Medal with Clayton in 2012, and finished equal seventh in the Eastern Division 3 Best & Fairest last year. Mark Griffiths, a big-bodied midfielder that played at Frankston in 2016, will also add plenty of grunt and accountability to the Saints midfield next season, while Jesse Firebrace, a Saints Under 19 premiership player and Under 18 SFNL Interleague Best on Ground Medal winner in 2016, also returns to the club. Among the departures are Dylan Sloan and Harry Szarnecki, who have crossed to rivals Chelsea Heights, while forward Jaydon Stiles will wear the colours of Natimuk United next year. Jason Hamilton has moved to Braybrook to become their new senior coach, with star veteran Mark Tasiyan following him across to the Western Region club.

The Saints also kicked off 2018 by luring former star midfielder Cameron Hansen back to the club. Hansen spent the 2017 season at South Belgrave after finishing fifth in City's Best & Fairest the previous year. In addition, the club has also snared former Tooradin star Chris Keenan, who lands at the Farm after one season as coach of Heatherton.

Last year's semi finalists were particularly quiet during the November transfer period, however, the Doggies have gone bang in the new year, luring 2013 premiership stars Matthew Herbstreit and Brendan Dawes back to the Kennel. Dawes, a brilliant hard-running, goal-kicking midfielder, returns after a stint at Seaford, while the talented and courageous Herbstreit will line-up alongside younger brother Carl in the red, white and blue. Dylan Peet will also head back to Tucker Road after three seasons at Black Rock. The club also pulled a massive coup on the eve of the season by lodging a transfer for delisted Kangaroo Corey Wagner. Wagner managed just AFL eight matches his two seasons at Arden Street, with an ankle injury suffered against Adelaide in Round 7 last year curtailing his progress. However, the mid-sized onballer has plenty of speed and endurance, and his arrival at McKinnon Reserve is a tremendous get for the Doggies. 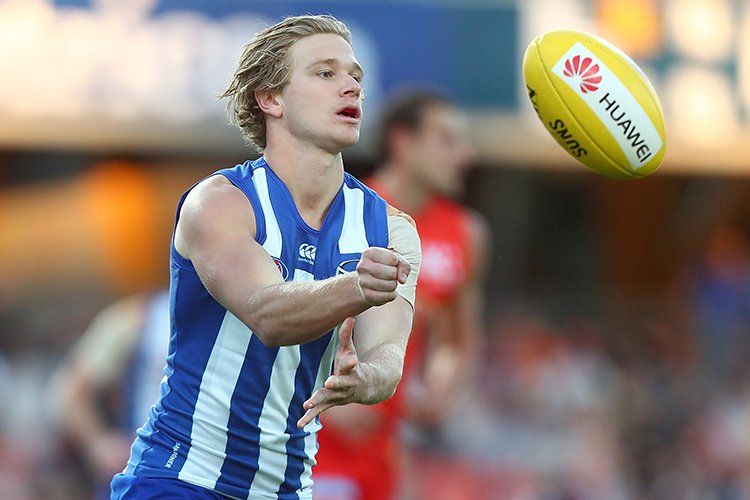