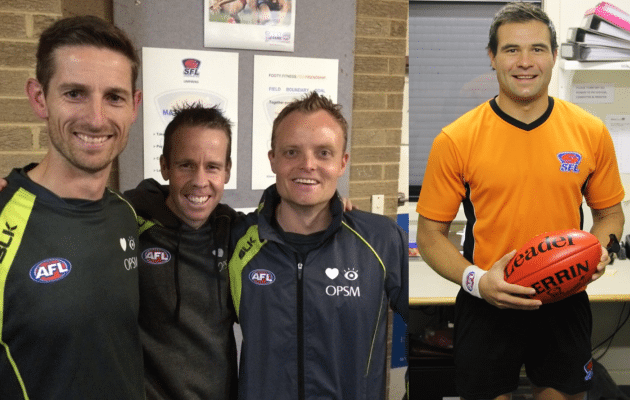 In excess of 120 Umpires took part in match day skills sessions and then had the opportunity to take part in a question and answer session with AFL Field Umpire: Jason Armstrong, Boundary Umpire: Shane Thiele and Goal Umpire: Daniel Wilson.

Wilson, who started his career with SFNL, said that Umpiring brings together quality people, and reminded the SFNL Umpires that there are plenty of opportunities in umpiring. He said that by listening to your coach that you can develop into the best Umpire that you can be. He went on to say that each match umpired should be treated as the most important match on that day.

Jason Armstrong, who started his career in Warrnambool, said that umpiring at AFL level was a “lifestyle” and required ongoing dedication and commitment.

Commencing his umpiring career in South Australia, Shane Theile, explained that he runs daily to ensure that he remains at peak fitness for the top footy competition in the land.
SFNL Director of Umpiring, Peter Mair:

“Umpiring is a great way to contribute to the game.

The Southern Football Netball League not only offers the opportunity to be great community Umpire, but also the chance to make a career at VFL and AFL level.

We offer a fun, safe and inclusive environment for all of our Field, Boundary and Goal Umpires.

The one common denominator is that our Umpires love the game of footy.

SFNL Umpiring is one of the leading Umpiring groups nationally for the number of females umpiring. We more than double the national average, with 15% of our overall list being female.

A number of former players make up the composition of the SFNL Umpiring group. This continues to enhance developing better relationships with Coaches, Captains and Players across the league.”
As part of Community Umpiring Round this weekend, Coaches and Players will shake hands with all Umpires after the toss of the coin on match day.

Make sure you check out this week’s RECORD to hear former VFL and SFNL player Ilya Fridman’s journey from player to Umpire, or read his story HERE

If you are interested in becoming involved in the game there are still vacancies for Boundary, Goal and Field Umpires in 2015.