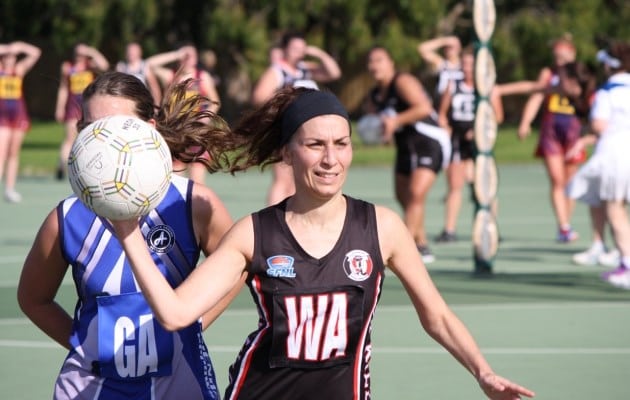 
Dingley FNC’s Alicia Wise joins the panel for this week’s episode of Nothing But Net, while Mel Aitken turned roving reporter at Friday’s Women of the South cocktail event.


Listen back to Sunday’s Nothing But Net podcast in the player above.

The Heatherton derby was the most anticipated feature of Division 1 in Round 6, at least for the neutral observer. The more senior of the two Heatherton sides asserted their authority however, as did their main rivals for the title. Situation normal then...

St Pauls registered their first competition points of the season in a game against Bentleigh where the best play of the day came from the two defences. Interceptions were plentiful, and the hands were sure leading to errors on both sides. However, when shooters Grace Healey and Kelsey Dornau got any sort of decent supply they were deadly. After an even first quarter the likes of Mikaela Hayes and Eliza Barnes combined well to ensure that the game was turned to St Pauls’ favour, and they continued to score a solid 55-29 victory.

Keysborough played an in-form St Kilda City knowing that they had been close in every game they had played, but hadn’t got the rewards that their labours had deserved. The Borough started the match as they intended to finish it in conditions that were made more difficult by a strong and flukey wind, and their start meant that City had to play catch-up netball through the rest of the match. Whenever they looked like making a charge Keysborough had the answers, and with Jaimee Plumb dominating the goal circle despite the tricky breeze, Keysborough took the points, winning by 46-39.

Caulfield scored the first three goals to really throw the challenge down to Dingley. From there this developed into a highly skilful contest. Dingley steadied to take a small lead to the first change, and after Caulfield made a similar start to the second term the Dingoes fought back hard to lead by 14 at half time. The match featured a brilliant battle between Dingley defender Britt Goldsmith and star shooter Sophie O’Shea while at the other end of the court some skilful interceptions by Phoebe Naughton and Alice Pohlner meant that Dingley battled to convert the work done by the likes of Shae Wonnacott and Nikki Tulley in the mid-court. In the end, Jess Payne and Sarah Fischer were given enough opportunities to give Dingley a 56-38 win.

Heatherton White took the early initiative against the defending premiers, converting their first two opportunities, before Heatherton Black got into their stride. Black quickly equalised, and steadied well to lead 16-10 at quarter time. In the second term Black put their collective feet down, with Morgan Riley instrumental in feeding Nat Billings and Rahni Samason. White’s Kate Moffatt on the other side drove strongly and ran hard to supply her goalers, but they suffered in a tricky wind, and Mia McMillan’s late goal could only reduce the half time margin to 33-14. White started the second half strongly but again Black stabilised, and while White won the last quarter with good turnovers, better accuracy and a strong shooting percentage, Black were too strong, winning by 65-33.

Heatherton retained their spot at the top of the Division 2 ladder with a hard-fought 43-30 win over a Caulfield side that showed they were ready to mount a serious finals challenge. In a physical game played amidst a challenging wind, shooting was difficult and there were intercepts and rebounds aplenty, and Heatherton broke to an 11-goal lead at half time. Caulfield switched Cailtyn Ashby to attack and the change assisted a recovery to the point that Heatherton only led by three at the final change, but the Bears ran out of legs in the end allowing Heatherton to steady.

Bentleigh started their game well against St Kilda City, clearing out to a commanding lead deep into the first half. The City girls struck back well to come within three goals of Bentleigh, but could not sustain the challenge, and were defeated by 47-40. South Yarra were way too good for Mordialloc right from the start of their match, and they showed no mercy winning by 51-30. Heatherton have 24 points, leading Dingley (who had the bye) on 16. Caulfield and South Yarra round out the four on 12 points, St Kilda City have 8, Bentleigh 6 and Mordialloc 4.

Division 3 looms as a very tight competition with new challengers emerging weekly. Leaders Dingley had the bye in Round 6, and Clayton took second by defeating St Kilda City by 38-26, relegating the Saints to third. Heatherton (winning 40-35 over Black Rock), Keysborough (36-19 over CPL), and Lyndale (27-24 over Caulfield), are keeping a strong pursuit.

Dingley Gold prevailed in the battle of the two previously unbeaten sides over Heatherton White by 44-39. St Kilda City beat Mordialloc by 28-19 to secure third spot. Dingley Red beat Caulfield by 40-30 to take fourth, with Heatherton Black snapping at their heels with a 30-14 victory over South Yarra. In the other match, Keysborough 45 defeated Black Rock 30.

Dingley continue to set the pace in Division 5, posting a solid 35-26 win over East Brighton. Lyndhurst and Caulfield lead the chasing pack, winning by 32-29 over Cheltenham, and 66-20 over St Pauls respectively. Heatherton kept fourth spot in defeating Bentleigh by 46-15, while St Kilda City (45-15 victors over Highett), and Skye (successful by 36-26 over Dandenong), stay in contention.

The top four sides all won in Division 6: Heatherton by 37-22 over Dingley Gold, Dingley Red by 59-37 against Mount Waverley, Doveton by 32-25 over Hallam and Clayton by 28-24 over South Yarra. Mordialloc stayed in touch by beating St Kilda City by 28-20, while Lyndale scored their second victory of the season over Aspendale by 39-35.

Dingley established a large break on their Division 7 rivals, beating third placed CPL by 33-30. Oakleigh tripped up against Lyndhurst by 28-22, but retain second place, while East Brighton hold fourth despite losing 38-32 to Cheltenham. Doveton won the close one against Hampton by 24-23 and St Kilda City beat Murrumbeena by 29-17, while Chelsea Heights forfeited against Heatherton.

Keysborough and Lyndhurst remain unbeaten at the top of Division eight, while Mordialloc took third place by inflicting Dingley’s first defeat. Dandenong and Lyndale both won to head the rest, while Hallam stayed in touch with a one-goal win over Black Rock.