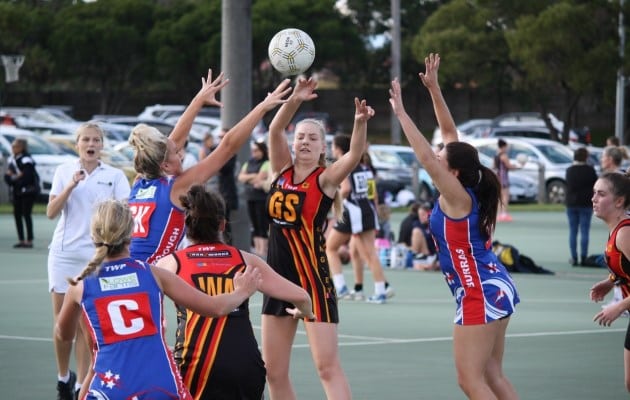 Round 5 showed the top two sides in Division 1 are still teams to be reckoned with, another announce themselves as a genuine premiership contender, and the nearest challengers outside the top four put those above them on notice that they’re not going away.

St Kilda City played Bentleigh in a game where there was plenty of scoring early in the match as both sides looked to move the ball quickly and attack at all costs. City’s defensive pressure was slightly superior early which meant Bentleigh took a little longer to get the ball into the goal circle, and City’s 15-12 quarter time lead was extended to 28-17 at the long break. The second half provided more of the same. Bentleigh played quite a physical game in defence, not always to their benefit, and despite some attacking flurries from Bentleigh, positive St Kilda ball movement on the break provided ample opportunities to maintain the margin, with City 58 Bentleigh 28 being the end result.

Heatherton Black took to the court against St Pauls missing Rahni Samason, Kirsten Daley and Nat Billings owing to VNL commitments. They were, however, able to call upon Vic Fury defender Jacqui Newton and she controlled play brilliantly from the back third of the court. Heatherton felt early that they were allowing St Pauls to set too fast a tempo early, and they pushed the premiers to the point where they only trailed 10-8 at quarter time. A key battle was that between tall Heatherton goaler Ella Batish and returning defender Ann Cooper, which made brilliant watching. The Heatherton girls created enough opportunities for Batish and Bayley Mifsud in attack, and despite St Paul’s defender Megan Hendry continuing an excellent season, Heatherton were too good winning by 47-34.

Dingley and Keysborough are always hotly contested affairs, and both sides had familiar faces returning. The three musketeers of Dingley were re-united with Shae Wonnacott and Sara Merkus joined by Alicia Wise, whilst Keysborough were able to partially cover player losses by adding the experience of Sam Downie. An even start created a 13-13 quarter time scoreline but Dingley were able to assert their authority from there. Keysborough were able to keep the score ticking over enough to stay in touch, but being behind 42-29 at the last change they were in a bit of strife. The Borough applied pressure from the start of the last term, and they won the quarter comfortably, but it was too little too late as Dingley scored by 50-41.

Caulfield started the match brilliantly against Heatherton White, scoring five of the first six goals and leading by seven at the first break. Caitlyn Ashby teamed well with Sophie O’Shea in the circle and looked perfectly at home, and with Makayla Bulte and Brodie Aumont controlling the mid-court they were given plenty of chances. Heatherton White move the ball from one end of the court to the other as efficiently as any side in Division 1, and they certainly missed vital link player Sienna Kelly, but Caulfield restricted them better than anyone has so far this season, and eight of the first eleven goals of the last term could make little impression, Caulfield throwing down the gauntlet by posting a 54-39 win.

Division 2 opened on Thursday evening with the two main challengers to leaders Heatherton doing battle. This was a game in which both sides had their moments but it was the experience of Dingley that ended up winning the day over the youthful energy of the Caulfield Bears. Neither club will be discouraged by what they saw, and will feel as though they are big chances in August. Dingley 40 defeated Caulfield 33.

Heatherton played the impressive South Yarra side with two of their number backing up from having played half a game in Division 1 earlier in the day. The Lionesses had a good share of the ball early in the match but Heatherton’s defence is very well organised, and they were particularly strong on the rebound. Heatherton’s ball use was just a little more composed than South Yarra’s throughout the day, and with Sophie Bartlett and Teena Mifsud not missing much Heatherton were able to coast to a 51-22 victory.

Mordialloc played Bentleigh in the battle of two young, winless combinations, and it was the ladies in red that were able to control this battle from the start. This was a match that was always going to be won by the side that was able to minimise their errors, and Mordialloc were slightly the surer of the two sides. Shooter Brooke Davies had a good day finishing what her team mates had created, and Mordialloc were successful by 44-31.

Dingley lead the way in Division 3, and played a vital game against one of the main sides of the chasing pack in Clayton. In a match that was close all day they were able to keep top spot by winning by 34-27. St Kilda City trail the leaders only on percentage, maintaining their unbeaten record with a 45-39 win over ninth-placed CPL. Heatherton complete the four, beating Caulfield by 52-29, while Keysborough were too good for Lyndale by 51-25.

Heatherton White gave tenth-placed Caulfield a bit of a thumping, triumphing by 64-24 and retaining top billing in division four. Dingley Gold are also unbeaten, winning 47-32 over Keysborough. St Kilda City and Dingley Red round out the four, with City four goal winners over Heatherton Black and Dingley Red drawing 26-all with South Yarra. Mordialloc scored their first win of the season with a 26-24 victory over Black Rock.

Dingley are the only unbeaten side in Division 5, and won well by 44-26 over Cheltenham. Lyndhurst and Caulfield sit one win behind, with Caulfield inflicting Lyndhurst’s first defeat by 44-39 in a fine exhibition of netball. Heatherton beat Skye by 43-15 to take their place in the four, while East Brighton opened their account by winning 42-28 over Bentleigh. Highett and St Kilda City were the day’s other winners.

Division 6 looks very tight at the top, with only two points separating the top four teams. Doveton dropped to fourth with their two-goal defeat to Dingley Gold in second, while Heatherton’s 39-all draw with St Kilda City was enough to take a two-point break on the casing pack. Dingley Red took third spot with a 35-28 win over South Yarra, with Hallam and Mordialloc both taking their second wins of the season. Aspendale and St Kilda City played the second draw in a division where seven goals was the day’s biggest margin.

Dingley and Oakleigh occupy the top two spots in Division 7, both having solid wins this week. CPL, despite their loss to Heatherton, and East Brighton round out the top four. Keysborough, Dingley and Lyndhurst are still unbeaten in Division 8, and they are joined in the top four by Mordialloc, whose four teams all won in this round.