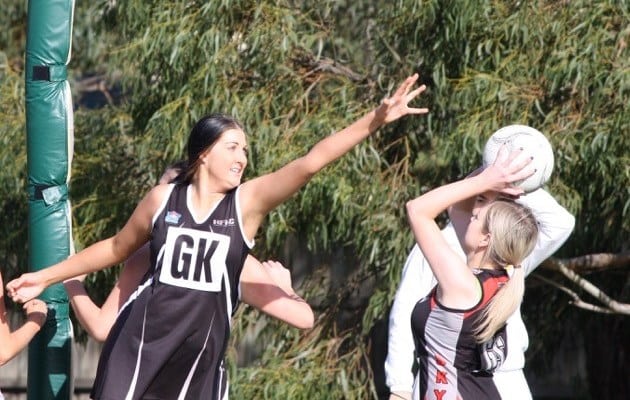 Up until the end of Round 13 we had not seen a single victory in Division 1 this season by a bottom three side against a top three side. All that changed in Round 14 after a gallant display by St Kilda City against three-time premiers Dingley.

The game started according to the established script with Dingley converting two opportunities early, but St Kilda responded with a string of five goals in a row. Dingley restored parity by quarter time and took a one goal lead into the main break. City have been competitive in many games this season but thrown the win away with one bad quarter, but they had the sniff of a kill here and did not let this one go. After a tied three-quarter time score left all to play for City started the last term well, and Dingley maybe fell into the trap of trying too hard to arrest the slide. St Kilda City were not to be denied, closing out victory by 36-27.

St Kilda City may have scored a famous victory in their club’s history, one that will have been celebrated with great gusto by their girls, but in doing so they may well have set up this year’s finals series. Heatherton and Keysborough will have designs on this premiership, with Caulfield also feeling that on their day they could do damage. But to survive in the jungle it’s easier if the bear is not awoken. Dingley will be stung by this result, and will be hard work for any opponent from here.

The other two matches may have been slightly more predictable in outcome, but were by no means less competitive. Caulfield took the game right up to Keysborough. The game was very even from the start, with Keysborough looking slick in the midcourt but Jane Keating in defence and Gaby Coventry-Martini in attack being particularly impressive for Caulfield. The Borough recovered from four goals down to lead by one at half time, and extended the lead to two at the last change. Here though Abby Mackie and Laura Agius began to find their shooting range and they got great supply from the Courtney Nash-led mid-court to pull away, finally winning by 40-31.

Bentleigh took on Heatherton, very much undersized and against an opponent that were in no mood to be trifled with. Their shooters found abundant supply as the first term progressed, leading 16-3 at quarter time. Bentleigh unleashed secret weapon Mariah Deacon at the opposite end of the court to which she is accustomed, and it seemed to spur Bentleigh on as they won the second quarter and were very competitive in the third, but Heatherton has strength all over the court, and flew home in the last to win by 52-26 to make sure of the 2016 minor premiership.

Division 2 saw Heatherton fall to their first defeat of the season on a cold Friday night, with second-placed St Pauls outlasting the leaders to win by 33-30. With this result St Pauls secured the double chance with the finals upcoming. Mordialloc secured fourth spot with their eclipse of Chelsea Heights, but not without a late scare. After an even first quarter they blew the Heighters apart in the middle quarters to lead by 11 at the last break. The Reds seemed to do everything within their power to throw the game away in the last quarter as the in-form Chelsea Heights girls threw all they had into their chase, but they hung on in the end to win by 35-32.

St Kilda City started as if inspired by their Division 1 colleagues, leading well after the first quarter, but CPL had run the lead down by half time. The second half was a ding-dong affair with first one side then the other gaining ascendancy, but it was CPL that finished the stronger to win by 40-37. The Dingley v Bentleigh battle was won in the second quarter as Dingley converted an even first term into an eight-goal lead. The lead was then extended at every change as Bentleigh, brave as they were, were unable to stem the tide. 43-23 was the final margin.

Division 3 was a mini dress-rehearsal for finals, with first placed Heatherton beating second-placed Dingley by 26-17, and St Kilda City in third having a thrilling 26-26 draw with Black Rock. This puts pressure on Black Rock for their final round game against Dingley, with Caulfield, who are hot on their hammer, having a slightly less tricky assignment against Skye. If these sides slip up Clayton could take fourth spot, but they would need to inflict Heatherton’s first loss to do it.

Black Rock tuned up for the finals in Division 5 by thrashing Mordialloc 60-5. Heatherton put an end to Dandenong’s finals hopes, while Bentleigh look secure in third spot after beating Lyndhurst. The big game in the last round is between Dingley and St Kilda City. Dingley currently holds fourth spot, but a win by about 20-25 goals by St Kilda City may be enough to unseat them.

The Division 6 top four has been set for a while. Lyndhurst will play South Yarra and Caulfield will play Lyndale in the first week of finals. Caulfield took a bit of psychological advantage by beating Lyndale by 44-21 this week, and with South Yarra having given the Lightning their only taste of defeat back in Round 10 they will know that the job is not beyond them. All finals sides have games against bottom-half opponents this week.

Likewise, the finals spots are set in Division 7, with Heatherton, Bentleigh, Mount Waverley and Oakleigh Districts going into the big end of year games. Bentleigh and Heatherton will warm up by playing each other in the final round. The top three sides will play the bottom three in the last round of Division 8 matches; Heatherton, Cheltenham, Dandenong and Keysborough to finish in the top four. The two Dingley sides will play in the major Semi Final and the two Mordialloc sides in the minor semi in the Under 19s. That is also how the fixture list looks in the final round.

So for half our teams the season ends next Saturday. For the rest a new chapter begins. All the best to all teams from here.