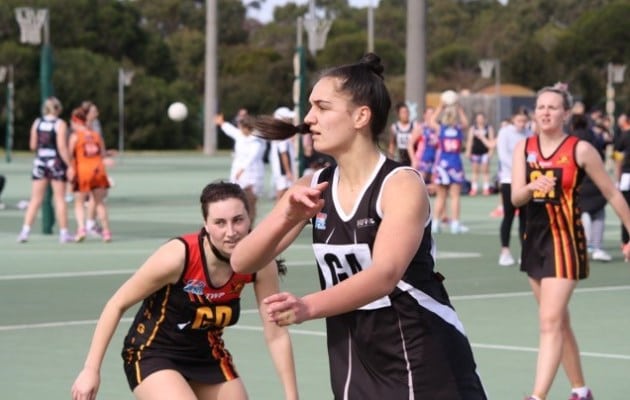 Mel and Hugh were this week joined in studio by Rahni Samason (Heatherton) and Rebecca Macinnnes (Keysborough) to discuss all things SFNL Netball Finals on this week’s episode of Nothing But Net. Listen back to Sunday’s Nothing But Net podcast in the player above.

The Semi Finals for 2017 have been run and won, and the predicted rain stayed away long enough to allow the assembled crowd to enjoy a feast of competitive, skilful netball.

The qualifying semi was played once more by the competition heavyweights Dingley and Heatherton Black. Dingley have started several matches slowly this season, but this was not to happen here, as Nikki Tulley took the first centre pass and, despite needing three attempts to do so, Laura Piper converted. Laura was right on her game early, but despite Dingley leading strongly in the first five minutes Heatherton Black steadied to lead 11-10 at quarter time. That was the last that Dingley were to see of the lead for the rest of the day as the Heatherton girls took complete control in the second quarter, and their seven-goal half time lead was increased by the first two goals of the third stanza. The ball kept getting to Nat Billings and Rahni Samason rather more easily than Dingley would want, and while a Bridget Furphy flurry half way through the term gave hope, 41-24 at the last change was never going to be caught. Dingley showed character to reduce the margin to 49-35 by the final siren, but Heatherton, with last-minute inclusion Claudia Papatsikas excellent, are first into the ground final for 2017.

Caulfield took on Keysborough in the elimination final, and in the initial stages Keysborough really showed that they were playing for keeps. They were desperate off the ball and moved the ball excellently when they had it. Sophie O’Shea and Beth Wilson started to find their range late in the quarter however, and Caulfield took a 12-7 lead to the first break with them. The second term gave more of the same with the mid-court battles of Steph Clemons v Megan Kennedy, Makayla Bulte v Laura Agius and Fotini Stavrou v Amy Burns giving the crowd what they wanted. You sensed that seven goals wouldn’t prove a decisive half time lead and that Caulfield still had work to do, but work they did. In another quarter befitting a final where there was no tomorrow for the defeated, Caulfield managed to break the game open and from 40-22 there was to be no comeback. While Keysborough threw everything they had at the Bear girls they could do no more than square the final term, and a result of 56-38 gives Caulfield a crack at Dingley next week.

The unbeaten Heatherton played Dingley and were served up one heck of a contest in the first half in the Division 2 Second Semi Final. The Dingley mid-court, led by the smart and efficient Chelsea Goldin matched their hard-working counterparts whilst defenders Miranda Bailey and Marty Cooper were giving Sophie Clark and Teena Mifsud a difficult time. Dingley reduced an 11-7 deficit at quarter time to 21-20 at the main break. Heatherton looked a little rattled early in the third term, but they started to recover their poise and steadied to lead by eight turning for home. A final score of 47-38 was a little more comfortable than it may have seemed at various stages of this match.

Caulfield and South Yarra did battle to stay in the fight in Division 2, and sadly this match was marred by a nasty injury to South Yarra shooter Steph O’Dea early in the third quarter. To that point it had been a bright and attacking affair, with both teams moving the ball well and creating opportunities. South Yarra started well and matched Caulfield at 10-10 at quarter time, but Caulfield began to take control to lead 20-15 at half time. The game continued on a spare court after the injury, and while it took both sides a while to settle after the move the margin became eight at three quarter time, and Caulfield were able to close the game out to win by 38-27.

Division 3’s Second Semi Final gave a result that surprised many as Dingley entered the Grand Final with a 46-31 win over high-flying Clayton. Coach Mel Ades praised her “hard-as-nails” team as they matched Clayton for desperation in the first half and stole a march on their opponents in the third quarter. Scores were level at the main break but six goals down at three-quarter time, Clayton had it all to do, and Dingley weren’t finished yet. They maintained the rage in the final term and Clayton were unable to go with them, and a 15-goal win did not flatter the excellent Dingley side in any way.

Clayton will have to overcome Keysborough in the Preliminary Final to earn another shot at the Dingoes, and the Burras showed that this will be no easy task in their come-from-behind victory over highly-fancied Heatherton. Keysborough were behind at all three quarter-breaks, but Heatherton could not get a sufficient lead to put the Burras away. The margin was two goals in Heatherton’s favour at the last change, and this is where Keysborough started to throw everything at their opponent. They did enough to stay with Heatherton, and took the lead late in the game, hanging on to complete a meritorious 42-40 victory.

Division 4 remains anyone’s trophy after the first day of finals. Heatherton White, having taken the minor premiership, started the match against Dingley Gold with confidence, but that confidence was quickly snuffed out by their Dingley opponents. Leading scorer Bianca Waras-Carstensen lived up to her growing reputation from the start, and Dingley used their height advantage well in defence. The second half showed a couple of flashpoints as players from both sides battled for the same space, but it was Dingley that held their nerve, winning three of the four quarters to score a comfortable 49-34 victory.

Heatherton Black ensured that the Preliminary Final would be an all black and white affair by ending the challenge of Dingley Red. Heatherton broke the game open early, leading 14-5 at quarter time and keeping Dingley at arm’s length for the rest of the day. Dingley Red reduced the margin to three at half time, a deficit that was maintained through to the final break. Dingley will have felt that they were a chance of mounting a big challenge, but Heatherton intercepted well and refused to let Dingley get any sort of run on. With Chelsey McAndrew and Sontina Teinakore converting strongly at the other end it was Heatherton Black that rolled on to a 40-32 victory.

Caulfield were hot favourites to be first into the Division 5 decider. However, Dingley had other ideas. This game was even throughout the first three quarters, and you felt that the first side to steal a break on their opponents would be the eventual victors. That side was Dingley, and although Caulfield levelled after being down by five in the last quarter, Dingley were able to break away again to win by 44-38.

Caulfield will play Lyndhurst in the prelim after their thrilling one-goal win over Heatherton. This game see-sawed throughout the day but it was Heatherton that led by the barest of margins leading into the last quarter. It looked like the shooting of Verity Sheppard would carry the day but Lyndhurst would not go away, and with Melissa Mair similarly deadly on the shot it was Lyndhurst that created just enough chances to clinch an industrious 37-36 win.

Dingley Red walloped Heatherton in the first half to lead 23-7 at the main break of the Division 6 qualifying Second Semi. While the third quarter was somewhat more even, Dingley again cut loose late in the match to prevail by 46-24.

Dingley Gold stayed alive in their quest to make it an all-Dingley Div 6 Grand Final, making short work of Doveton. The Eagles’ best chance was to establish a lead early and make Dingley chase them, but after a bright start they were headed 12-8 at quarter time, a margin that was doubled to 23-15 at the half. Whilst they kept throwing everything at Dingley, Doveton could make no impression and bowed out of this year’s competition with a 43-29 defeat.

Dingley had been the dominant force during the Division 7 season but in a tight, low-scoring semi-final they succumbed to Oakleigh Districts by 23-21. Dingley looked like they would be able to carry the day until the three-quarter time break, but Oakleigh held Dingley to just two goals in the last term while adding six of their own to earn a break next week.

CPL are a side that had a few regular watchers thinking they could do considerable damage in August. Nobody, however, told Lyndhurst this as they took control of this match from the off. They caught CPL off guard in the first term, taking a three-goal lead to the opening break and drawing confidence from their steady opening. The lead was extended to 23-15 through the second quarter and while CPL came out snarling after half time, they could make no realistic impression and Lyndhurst were able to coast to a 45-36 victory.

Keysborough finished the Division 8 season unbeaten, building their season on a rock-solid defence and a sharp attack. Their defence won their qualifying final against Mordialloc, conceding their opponents a measly seven goals in the first half. They were more expansive in attack themselves in the second half, and having broken the back of the Mordialloc side they put them away, winning by 33-16.

Dingley in the elimination final had little trouble with Lyndhurst, establishing a good 13-7 lead in the first quarter, then weathering the Lyndhurst response in the second quarter to take complete control after half time. A 41-32 win will give Dingley great heart for the Preliminary Final next week.