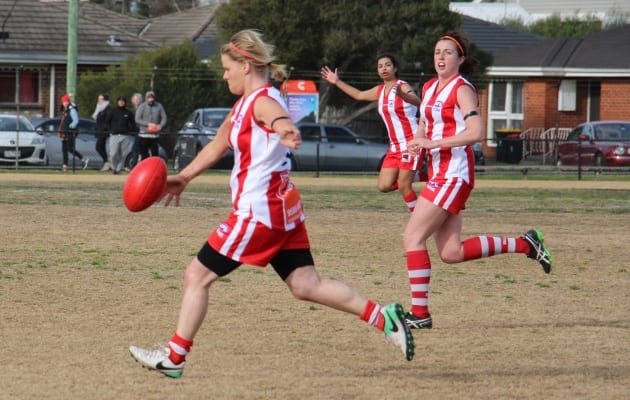 Oakleigh District has edged ahead of Highett with a 38-point victory at Princes Highway Reserve on Friday night.

The Bulldogs played the game short on numbers, but it did not show as they trailed the Oaks by a single point at quarter time.

Oakleigh District then were able to create a little separation by half time with as they led by four points following a goal each.

But the game was taken out of Highett's reach in the third as five goals from the Oaks blew the margin out to 36 points at three quarter time before a goalless final quarter.

Oakleigh District’s Emily McIntyre moved out of her regular role in the backline and blew the game open with three third quarter goals in a best on ground performance. She was supported by strong performances from Jess Szalek, Alex Amvazas and Julie Jaski, who added two goals as well.

Hannah Bowey, Zoe Rossiter and Kristy Blackman led the way for the Bulldogs, with the goal coming from Samantha Whitehall.

Endeavour Hills has kept their finals hopes alive as they defeated Edithvale Aspendale by 34 points at Glen St Reserve on Friday night.

The game was in the Falcons hands from early on as they jumped out with a four-goal-to-one first quarter.

That one goal would be Edi-Asp only major for the night as Endeavour Hills cruised to victory.

Edi-Asp were led Ebony Robinson and their only goal came from Lauren Field.

In the final Friday night game of the round, East Brighton maintained their perfect record against sides below them as they defeated Hallam by 53 points at Hurlingham Park.

Luisa Marollo went forward and was damaging with three goals, as Alanna Dalley, Aish Ravi and Jessie Pham were their best.

Murrumbeena got away with an inaccurate performance as they were defeated Lyndhurst by 58 points at Murrumbeena Park on Saturday.

Emma Morison and Danielle Wearne kicked three goals apiece for Beena and Morison was their best with support from Grace Bibby, Paulina Tragarz and Rebecca Niclasen.

Samara Hazenden and Biannaka Hazelden were Lyndhurst's two best in defeat, as Samara, Kelly Baker, Alana Pola and Melody Bryant all added a goal each.

In the final game of the round, Mordialloc cruised to a convincing 53-point victory over Bentleigh at Ben Kavanagh Reserve.

The Bloods would hold a comfortable 21-point lead at half time following a three-goal-to-nil first half.

Bentleigh kicked their only goal in the third quarter, with Mordialloc finishing with six second half goals.

Stephanie Sandoval was the Bloods best, with help from Alesha Neil's five-goal haul and strong performances from Megan Tymko and Mel Gratton