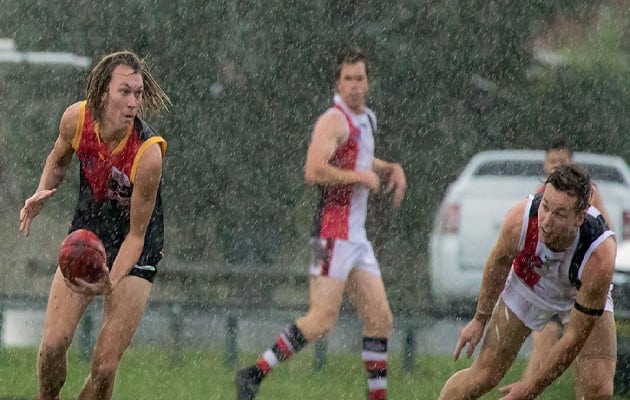 It was one of those typical Melbourne afternoons – bright sunshine one minute, pouring rain the next – and these difficult conditions ensured most games were decided by big margins.

East Malvern clinched a spot into the top five after their 50-point win over Heatherton at Dunlop Reserve. The Panthers were never headed, booting the first five goals of the game before cruising to an easy victory. Mitch Ferguson and Benji Neal were the standouts for the Panthers while Josh Bennett continued his purple patch for the Tunners.

St Pauls extended its winning streak to seven matches after eclipsing Chelsea Heights by 47 points at McKinnon Reserve. With Darren Walsh in good touch, the visitors fought hard in the first half and got within a kick at the main break. But the Doggies clicked into gear after the interval booting nine goals to two in the second half to run away with it. Brendan Dawes and ruckman Andy Gilbert were instrumental in getting St Pauls home.

Bentleigh kept alive its finals hopes with a hard-fought victory over Clayton at Bentleigh Reserve. Overcoming a quarter time deficit, the Demons slammed through five unanswered goals in the second term to take control of the game. Sam McGarry was one of the chief architects behind the Demon’s 22-point win with another sublime performance.

East Brighton’s visit to Jack Barker Oval was a fruitful one as they claimed the four points with a comprehensive demolition of Cheltenham. The Vampires kept the home side to just two goals and had it not been for some inaccurate kicking (East Brighton registered 9.20) the final 50-point margin could have been lot greater. Skipper Ben Douthie’s three goals saw him get the nod for best afield honours ahead of teammates Peter Larsen and Dean Williamson.

The final game went as expected with Dingley easily accounting for St Kilda City at Peanut Farm. The Dingoes’ wasteful 0.7 third quarter was the only blot on an otherwise clinical display as they ran out winners by an easy 49 points. Matt Morwood and Jack Clausen put on a clinic to help their side over the line.

Mordialloc extended their winning streak to 7 games with a comfortable victory against Hampton at home. The Bloods midfield brigade were simply too good for Hampton and their dominance resulted in the Bloods having a 50 point lead going into the final quarter. Though Hampton were able to win that quarter, it wasn’t enough as Mordialloc ran out 34 point winners. Sean Van Velsen was among the best for Mordialloc with 2 goals.

Caulfield moved back into the top 5 with an impressive victory against Moorabbin. The Bears looked in control for most of the first half but were unable put away the Roos leading into halftime. The second half was a completely different story as the Bears piled on 7 unanswered goals, restricting Moorabbin to just 5 behinds on their way to a 67 point victory. Adam Connell kicked 6 goals for Caulfield.

Skye remained second on the ladder after a hard fought victory against Murrumbeena. The bombers held a comfortable lead at halftime kicking 8 first half goals before a 3rd quarter fight back from Murrumbeena brought Skye back down to Earth heading into the final quarter. The last quarter saw the Bombers come back to life as they kicked 5 goals to none in the final quarter to run out 47point winners. Aaron Pacey was among the best for Skye.

Oakleigh moved back into the top 5 with a grinding victory against Doveton away from home. Doveton started strong, taking a 5 point lead into half time before Oakleigh kicked into gear. In the second half, Oakleigh’s experienced players took over with the likes of Paul Fermanis, Dan Kiellerup and Elvis Alimovski stamping their authority on the game. In the end, Oakleigh were able to kick 4 second half goals, restricting Doveton to just one to win by 16 points.

Highett also moved back into the top 5 with another come from behind victory against Springvale Districts. Springvale looked on target to exact their revenge on Highett but history was destined to repeat itself as Highett clawed their way back from 24 points down at halftime to only 11 points going into the final change. A 4 goal to 1 final quarter ensured that Highett would come from behind again to beat a disappointing Springvale side. Pat Singh and Tom Brown were the best for Highett.

Home team, Hallam, started slowly in a night game against Dandenong. The Redlegs raced to a 41-point quarter time lead, kicking seven goals straight to a solitary behind. The Hawks worked hard for the remainder of the match, but the Redlegs hung on to win by 10 points, consigning Hallam to the bottom of the ladder. Daniel Atkin had a productive day with four goals for Dandenong, and its best player was Brodie O’Loughlin.

Black Rock played host to Mount Waverley and was expected to take it up to the ladder leader. After trailing by 20 points at half time, the Jets lifted and were unlucky to be narrowly outscored in the third quarter, undoing some of their good work with missed shots at goal. Although facing a four-goal deficit at the last change, the Jets attacked throughout the final quarter, keeping the Mountain Lions scoreless. In the end Black Rock ran out of time, but was only beaten by two goals. Jarrod Wilkin was named the best player for Mount Waverley, and its leading goal kicker was James Gough with three.

At Roy Dore Reserve, South Yarra could not match the class of Carrum Patterson Lakes. Jordan Bertrand helped guide CPL to a comfortable 35-point win, being named its best player; Doug Watterson and Stuart Cormack were also prominent with three goals each for the victor.

Ashwood played at home against Lyndale, and Southern FM listeners were treated to a competitive game. At the final change the Pumas led by 13 points, before breaking away in the last quarter to record a 28-point win. Trevor Kumetaitis starred with five goals.

In a scarcely believable result at Edinburgh Reserve, Sandown destroyed Endeavour Hills by 125 points, as the Falcons managed only one goal for the game. Matt Davis and Jake Chapman each booted four goals for the Cobras, with Daniel Macklin their best player.

Matches don’t have to be high-scoring to be entertaining thrillers, as Bentleigh and Clayton proved last weekend. Despite being held scoreless in the first quarter, Clayton fought to get within four points of the ladder-leading Dees at the final change. The Dees were too strong once again however, and held off the Clays by 11 points in a cracking match.

An upset looked on the cards as Chelsea Heights led St Pauls at half time at McKinnon Reserve. The Dogs got their growl back in the second half though, and through class and composure kicked away to win by 25 points.

A ten goal haul from Ryan McConville highlighted what was a marvelous performance from Skye at home against Hampton. The Hammers were never in the equation, and what remained of their resistance was broken in the last quarter - the Bombers kicked 12 goals to none. The final margin was 136 points.

Dingley led and increased their lead at every break against Carrum Patterson Lakes in a one-sided affair. The 72 point win reinstated why the Dingoes are second on the table at this point of the season. Caelin Brooker booted five for the Dingoes.

In the upset of the round Highett kept Cheltenham goalless for the entire match and won a real arm-wrestle by 26 points. Both sides had chances, however the Dogs took theirs, and the Rosellas did not. Joe Bekierz was the stand out for the Dogs.

The run for the final five took a big twist last week when Endeavour Hills took down Sandown away from home, by 63 points. The convincing win gives the Falcons a two game buffer in fifth position from their nearest rivals. James McNeill and Kong Tut were amongst the best for the Falcons.

The ‘hot’ Cerberus delivered Skye just their second defeat of the season by a measly ten points. There was nothing mythical about their performance though, Cerberus won the battle of attrition in the last quarter through grit and determination.

Hallam ran down Dandenong in a bizarre low-scoring encounter where only eight goals where kicked for the match. Despite kicking only one in three quarters, the Hawks managed three majors to the Reglegs’ none to win by five points.

A big winning margin of 70 points masked just how wasteful Clayton were in their win over Doveton. The Clays kicked 0.8 in the first quarter, finished the match with 8.29, and will be counting their blessings that their inaccuracy didn’t cost them.

The same couldn’t be said for Dingley, who were proficient in knocking off South Yarra, to the tune of 155 points. 13 of the Dingoes got onto the scoreboard in a very even team performance.

Mount Waverley put in a workmanlike performance to overcome Black Rock, pouncing on what looked like a close match at half time and turning it into a 24 point win.