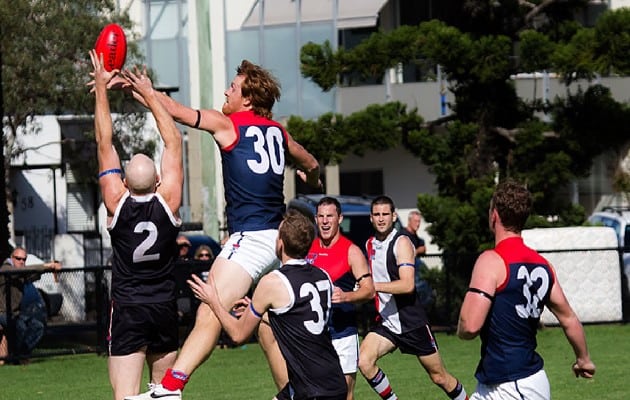 Gale-force winds and Arctic temperatures on Saturday made conditions tough across all games last week.

Bentleigh had no issues with the weather though, as it claimed its fourth win of the season with a comprehensive 50-point drubbing of St Kilda City at Bentleigh Reserve. A four-goal-to-nil second term gave the Demons the upper hand before they ran away with the match in the second half on the back of the starring role of Luke Crozier and seven goals from Ben Morrison. Kristian Economou continued his good form for the Saints.

A best afield performance from Luke Newton helped Chelsea Heights to a 47-point win over Heatherton. A solid first half from the Tunners saw them trail by 17 points at the main break, but despite the best efforts of Kane Tucker they couldn’t match it with the Heighters who steamrolled them in the second half.

Over at Dunlop Reserve Dingley came from behind to defeat a spirited East Malvern outfit. Six first-term goals with the wind set the scene for a 27-point halftime lead for the Panthers. Not to be denied, the undefeated Dingoes clicked into gear after the long break and with Adam Lloyd and Dean Francis (six goals) in fine form they powered home to win by 36 points. Kurt Gowers was among the best for East Malvern.

The game billed as match-of-the-round turned out to be a fizzer with St Pauls giving East Brighton an absolute towelling at McKinnon Reserve. The Vampires could only manage one goal to three quarter time as the merciless Doggies streaked away to win by 73 points. Mercurial forward Travis Ridgeway single-handedly outscored East Brighton with six goals while teammate Tim Blackwood was also a solid contributor. Mitchell Garvey played a lone hand for the Vampires.

The final game saw Cheltenham account for Clayton in a low-scoring encounter at Jack Barker Oval. Goalless in the first half, the Clays managed to hit the scoreboard with more regularity in the second, but by then the damage had already been done. Jarrad Martin and Tom Donnell were instrumental in the Rosellas’ 34-point victory, while Justin Mitrevski was the standout for Clayton.

During Round 10, we celebrated the increasing role women play in the development of the Southern Football League.

Mordialloc consolidated first spot on the ladder with a hard fought victory against Highett at Ben Kavanagh Reserve. Missing some key players, the Bloods were pushed by the Dogs for three quarters before the class of the Bloods rose to the occasion, kicking five final quarter goals to one to run out 42 point winners. In his first game for the seniors, James Keighley was among the best for the Bloods.

Murrumbeena withstood a second half fight back from Moorabbin to record their fourth win of the 2014 season. The Beena led by 31 points at half time but could only manage two goals in the second half whilst conceding six goals to the Roos. The win puts Murrumbeena a game back from 5th spot and keeps their finals hopes alive. Will Voorham was best on ground kicking 3 goals for Murrumbeena.

Skye maintained their reputation for defensive excellence with a comprehensive win against Hampton in Round 10. Though the Bombers failed to kick accurately in front of goal, their defensive dominance restricted the Hammers to only two majors for the game. The win keeps Skye in 2nd spot, only percentage behind ladder leaders Mordialloc. Aaron Harper was among the best.

Doveton also kept their finals hopes alive with a nail biting win against a gallant Caulfield at Power Reserve. The weather played its part in the game as teams were helped by a strong breeze blowing to one end of the ground. Despite the low scores, this game was one of the games of the season as both teams had their chances to win, but a three goal final quarter pushed Doveton over the line by 9 points. Peter Dye had another bag to his name, kicking 5 goals.

Oakleigh Districts reminded us just how good they can be with a commanding performance against Springvale Districts at Springvale Reserve. Oakleigh got their revenge from a loss earlier this season, jumping away to a 31 point lead at quarter time and that would be all she wrote. Oakleigh continued their dominance in the second half kicking 7 goals to 1. John Walker was again among the best for Oakleigh

Ashwood has pulled off a huge upset at home, beating Mount Waverley. The Magpies led by 32 points at three quarter time, but had to withstand a final term comeback from the Mountain Lions. In the end it was a seven-point margin. Chris Scully booted three of the Magpies’ goals, whilst Mitch Saunders kicked a couple for them. Their best players were Mick Field and Jacob Barker. Ashwood has now won three games in a row and knocking off the previously unbeaten Mountain Lions will fill the Magpies with confidence.

In another feel-good story for the underdogs, Hallam proved too strong for Endeavour Hills on a bitterly cold evening at Hallam Reserve. The Hawks ran away with the game in the last quarter, booting 4 goals 3 behinds to nothing, to record a 26-point victory. Linden Fredericks was the best for the winners, whilst Matt Neve and Kyle Kime each booted three goals for them. The Hawks have moved off the bottom of the ladder.

Sandown hosted Carrum Patterson Lakes and the Cobras were 17 points ahead by the last change. The Lions responded with five last term goals and celebrated a 15-point win. CPL’s best players were Chris Mouritz and Rod Macleod. Only percentage separates the Lions from top spot on the ladder.

At Greaves Reserve, Dandenong managed a competitive first half to trail Lyndale by only two points at the long break. The Pumas broke away in the second half to run out 26-point winners. Taylor Irish and Alex Bertucci were the best players for the victors.

Black Rock led at every change against South Yarra, and despite scoring only one behind in the last term, the Jets cruised to a 35-point win. Tom Dewar kicked three goals for them, and Cory Durie and Jay Williams were named their best players.

It was a one-sided round of matches in the Under 19s last week, with no games closer than 40 points.

Skye belted Chelsea Heights by a round high 149 points, finishing with a huge 12 goals in the final quarter. Ryan McConville kicked a bag, recording ten goals in the rout.

Ladder leaders Bentleigh saw off a fierce first-half challenge from Carrum Patterson Lakes to win by 88 points. The Dees lead by just two goals at half time, but 13 goals to one in the second half ensured a big victory for the boys in red and blue.

St Pauls moved into the top five with a comfortable win over Highett, by 74 points. 11 individual goal kickers ensured that the Doggies were often on the scoreboard, handing them another decent percentage booster.

An eight goal last term confirmed the trip to Hampton would be an enjoyable one for Dingley, as they claimed victory by 121 points. Caelin Brooker was the star with eight goals in a dominant display.

Clayton were too strong for Cheltenham in a low-scoring clash at Jack Barker Oval. While neither team managed to kick a goal in the first quarter, the Clays kicked into gear and claimed victory by 42 points.

We saw some cracking matches in Round 10, none more so than Clayton’s narrow victory over Cheltenham. The Clays won by five points on the back of Luke Romanelli’s six goals.

Cerberus inflicted Mount Waverley with their first loss of the season at home, by 29 points. The Mountain Lions lead by a goal at the final change, but were overrun by Cerberus in a dominant last quarter.

A scoreless first quarter from Sandown immediately put them on the back foot against Skye, and the Bombers did not relent. Bradley Dyer kicked another bag helping the Bombers win easily by 62 points.

Moorabbin held on for their second win of the season in a tense encounter with Dandenong. The match was very even for the entire contest, but the Roos took it home by seven points.

Dingley improved their percentage and stormed into second spot on the ladder with a commanding 136 point win over Doveton. The Eagles had the wind knocked out of their sails and went goalless for the match.

It was a trouble free victory for Black Rock over South Yarra too, eight goals in the last meaning the Jets won it by an even 60 points.

Finally Endeavour Hills stayed a game clear in fifth with a workmanlike 46 point win over Hallam.