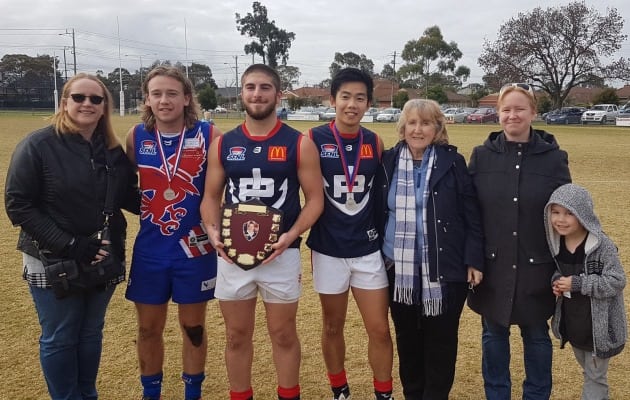 Listen back to this week’s The 5th Quarter podcast, featuring Ashwood President Daniel Egan as the special guest, in the player above.

Hampton came agonisingly close to their first win of the season, going down by 17 points in a courageous home performance against Endeavour Hills.

Trailing by seven points at the first break, the Hammers returned to the field in the second term with a 4.3 to 1.3 turnaround and boasted an 11-point lead at half time.

Unfortunately for the Hammers, and despite starring efforts from their best Caleb Lefebvre and Troy Smith, an awakened Falcons flock took control after the main break.

Some missed scoring opportunities for Endeavour Hills (6.12 in the last half to Hampton’s 3.2) prevented what could have been a more damaging margin – nonetheless, a six-goal haul between Scott Myers and Jaye McDonald sealed the deal for the sixth placers.

A positive performance for the home side, who will be even hungrier for the four points when they meet Bentleigh in Round 10.

A nail biting finale saw no sides sing at Oakleigh’s stomping ground when the Dingoes came to play.

A seesaw series of events took place at Princes Highway – Dingley led by three at the first break, and then Oakleigh by two at the second.

Emotions flared increasingly throughout the highly competitive and physical hit out – a strong indication no sides were willing to surrender in the 2 vs 4 clash.

Three points up at three quarter time, the visitors simply couldn’t shake off the reigning premiers. Every move they made was shadowed, and vice versa.

Rory Goldsmith kick started the fourth term with a goal for the Dingoes – but this was swiftly answered by Oakleigh’s Dylan Duffield, evening the score to 39 all with two goals of his own.

A desperate goal from Dingley’s Connor Watson followed, and with one and a half minutes to go, a six-point lead had a jubilant Dingoes crowd believe the game was over.

With 30 seconds remaining, a costly free kick in Oakleigh’s forward line could not have landed in worse hands for the Dingoes, with star Gianluca Cappiello slotting the shot and effectively silencing the field – 45 points apiece.

A snapshot of what Under 19s finals football will look like in September.

Alex Windhager was dynamic for the Dingoes, and Regan Peddle unstoppable for District.

Bentleigh came off best in another close match of the round, finishing 13 points above East Brighton at Hurlingham Reserve.

Only one point separated the sides at the main break, and a solid Bentleigh defence in the third term restricted their opponents to an unproductive attempt – 2.2 to East Brighton 0.2.

A competitive quarter followed with both sides booting 3.2, however, a quiet third term from East Brighton proved costly as Bentleigh managed to hold on for the four points.

Jordan Burns was best for East Brighton, and Jonathon Mylonakos was a highlight in the forward line with four goals.

Keysborough were outclassed by a destructive Parkmore / Springvale, going down by 119 points at home.

In doing so, Parkmore /Springvale took home the inaugural Shaun Oliver Memorial Trophy, struck in honour of the heroic former Parkmore and Keysborough player who was tragically killed while trying to save the lives of two young children caught in a rip last year.

Lachlan Milne was best for the third placers, and Robert Lega Frost was a force to be reckoned with, booting seven goals of his own.

The winners will look to back up similar efforts when they meet Oakleigh in Round 10.