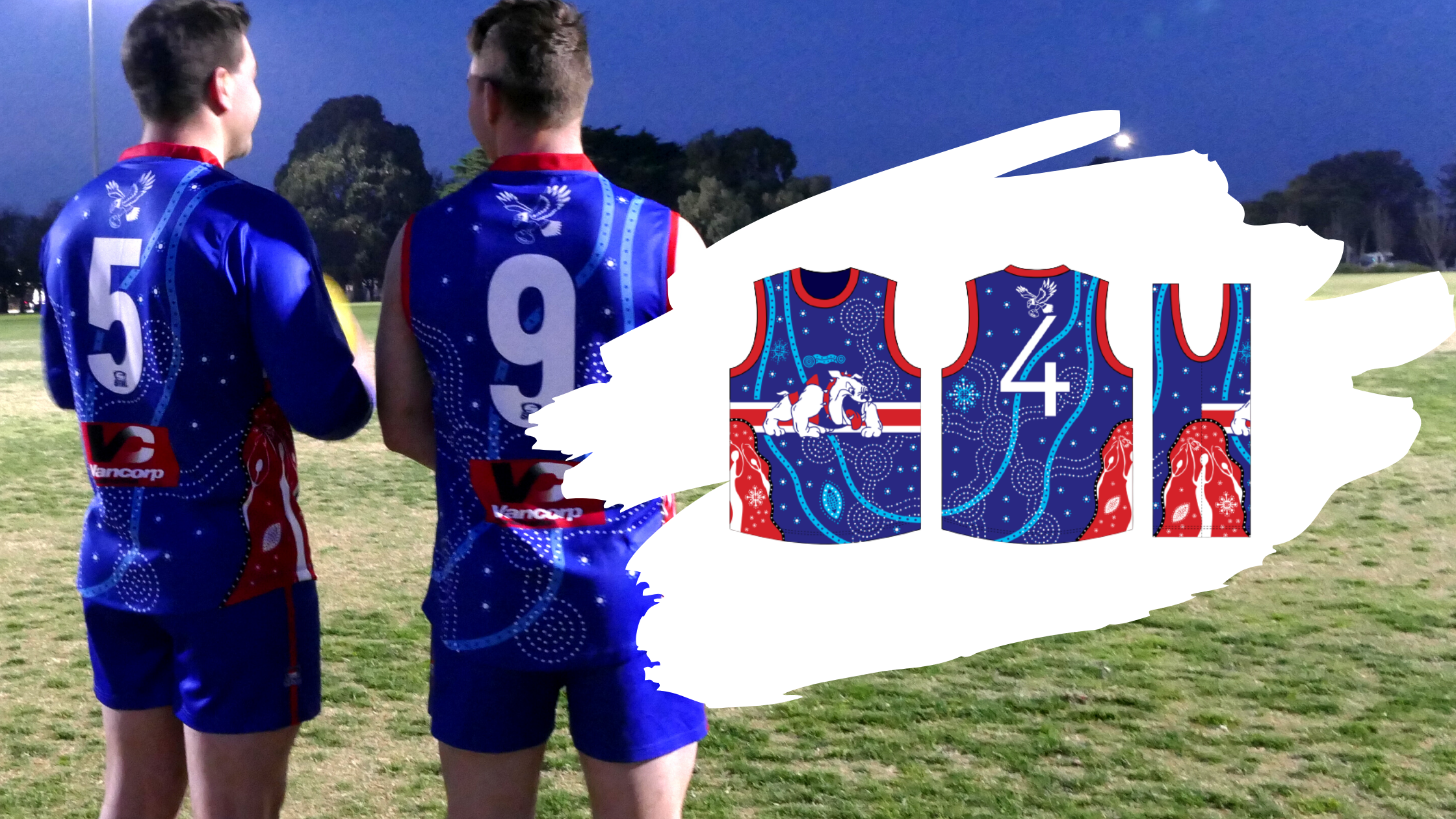 This week across the Southern Football Netball League clubs are celebrating NAIDOC week. St.Paul’s McKinnon FNC President, Mike Lloyd is excited to watch their football side run out during NAIDOC week “The club was keen to support and participate in NAIDOC Week by wearing an indigenous designed jumper to help celebrate not only Indigenous communities, but by Australians from all walks of life”. The St.Paul’s Mckinnon FNC football jumper for the Indigenous Round tells the story of the club and its history. The Bulldog mascot is owned by the club and the colours of Royal Blue, Sky Blue, Red & White are featured throughout the jumper design. They will be wearing the jumpers at home against Mordialloc this Saturday.

The NAIDOC theme for this year is Heal Country, This calls for all of us to continue to seek greater protections for our lands, our waters, our sacred sites and our cultural heritage from exploitation, desecration, and destruction. This week provides an amazing opportunity for us all to support our local Aboriginal and Torres Strait islander community.
Members of the club are excited to see the boys run out in the indigenous guernsey, “This is the first time we’ve had indigenous jumpers and the club has got right behind the cause” Says senior footballer Brad Dolan.
The jumper was designed by one of the players, Barama Blow, Father Gene. The buzz around the jumpers and the significance behind them has brought a new energy to McKinnon Reserve, Barama expressed how proud he was of the club for supporting the initiative “Hat’s off to St.Pauls for being that step closer to reconciling and embracing the culture”. The jumpers tell a beautiful story about the journey of football at the McKinnon ground; The Front Symbols:
• The sky-blue think lines is a representation of the 2 main roads (Nepean Hwy & East Boundary Road) that have to be travelled to get to the McKinnon ground;
• The football in the Indigenous design, is a representation of ‘Marn Grook’ football that was played in and around the Melbourne metropolitan areas;
• The symbol above the bulldog mascot is a bora ring for boys to become young men and once they are young men, they can play Marn Grook football with adult men. The small ring is their starting point with a mentor, the lines represent the journey they need to travel as their transition process and the large ring is where they meet elders who provide them with their new man’s name which is kept for life;
• The football symbol at the bottom of the bulldog mascot is the Marn Grook football which was made of possum skin and filled with charcoal used to play the game;
• All the camp site symbols represent all the playing fields within the Southern Football Netball League.
The Back Symbols:
• The eagle with the football is Bunjil the Victorian mob’s ‘Great Spirit Father ‘who always flies down with the football to provide the game blessing and to give Welcome to Country;
• The camp site symbols with their adjoining journey lines represent the areas from where all past & present players come from to play for the St Paul’s McKinnon Football Club;
• The large star like symbol is a representation of the football community that follows and supports the St Pauls McKinnon Football Netball Club.
• All the other star symbols are spirits of past & present players traveling to the McKinnon ground.
The Side Panel Symbols:
• The images in the red panel are the spirits of past players who are ever present playing their own football game when present players are gathered for training and games;
• The small star symbols are all past players watching and waiting for each game to be played.