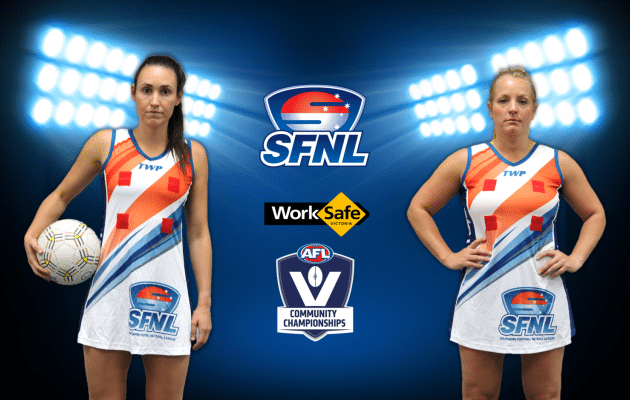 The annual Interleague weekend has rolled around again, and this year the Southern FNL welcomes the representatives of the Central Highlands Netball League to do battle at Marriott Waters.

Southern coach Mel Starr has been delighted at the buy-in from the clubs this season. Almost unanimously they have got behind the concept, which has allowed a good pool of players and coaching assistants from which to form a squad. The selectors have gone for strength and versatility in those that they have picked, and have worked hard in training to mould a combination that they feel can bring home victory.

To this end, Caulfield defenders Phoebe Naughton and Alice Pohlner have been selected as the pillars of the Southern defence. They offer height, athleticism and also have the advantage of playing together each Saturday. They are augmented by Dingley’s skilful tall defender Brittany Goldsmith, who has developed a reputation for making life difficult for the very best shooters that Southern has to offer.

In the mid-court, Southern has looked to St Kilda City and Mordialloc to provide a settled combination that can work together whilst providing the vital elements needed for a solid engine room. In Louise Moetu they have a supremely fit, athletic wing defence/centre who will run all day and surprise with her leap and agility. Chloe Ballard brings the experience and intelligence that any successful mid-court combination needs, while Lucy McKeown from Mordialloc provides a no-nonsense approach with the consistency and ultra-competitiveness to do the hard work required to get the job done. Chloe and Lucy are two of the better attacking mid-courters in the SFNL and will feel that they can provide excellent angles and opportunities for the Southern shooters. Alanna Harris compliments this triumvirate with her elite agility and running capacity, and the flexibility to excel in any mid-court role.

St Kilda City’s Jessica Jones heads Southern’s shooting division. She brings presence, poise and authority to the goal circle and will also add vital leadership skills to the team. She is ably assisted by one of the best young talents in the SFNL in the deadly accurate St Pauls spearhead Grace Healey. The third member of the Southern arsenal is fellow St Kilda City shooter Rosie Augl. Rosie has the strength and adaptability to be a perfect foil for whoever she may partner in the goal circle.

Southern are under no illusions – they know that the Central Highlands will bring with them a strong squad that is not intent on venturing home without capturing the win. Coach Jordan O’Keefe has the know-how and experience required to build a cohesive unit capable of a strong performance. Eight of her nine-member squad play for clubs in the top eight of the 16-team A Grade competition, three of whom are coached by O’Keefe at the dominant Learmonth club. In captain Kelly Conroy from Springbank, Central Highlands have a skilful performer with an impressive list of achievements for one who is still quite a young player, and there are few weak links among her band of able lieutenants.

The netball begins at 2.30pm at the impressive Lyndhurst complex. All of us at the SFNL wish all players and officials the best of luck for a successful afternoon, and may the best team win.