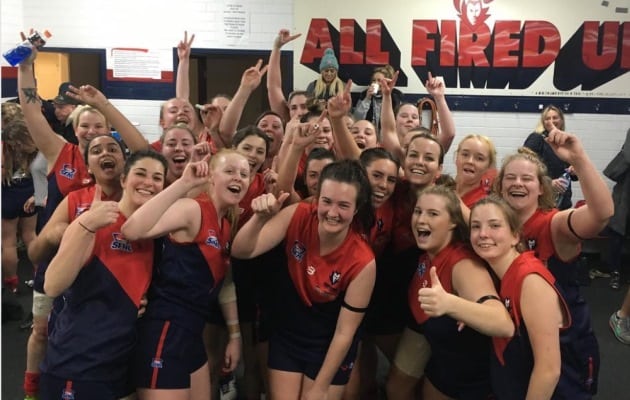 In the game of the round at Bentleigh Reserve, it was all Bentleigh as they claimed their first win of the year over Edithvale Aspendale by 18 points on Sunday.

Edi-Asp had their fair share of attacking chances, but their 0.4 to 1.0 saw them trailing the Demons by two points at quarter time. Two goals and two behinds for Bentleigh saw them extend their lead to 10 points despite conceding a goal to Edithvale Aspendale. The Demons added two unanswered goals in the third quarter as their first looked within sight, leading by 20 points. Both sides kicked one goal in the final quarter as the result was safe for Bentleigh.

At Turner Road Reserve, Mordialloc again did enough to defeat Highett, this time by 45 points on Friday night.

Highett were fast out of the gate and would lead by seven points at quarter time after holding the Bloods to a single goal and adding 2.1 of their own. The Bulldogs kicked another in the second but Mordialloc were unstoppable with a five-goal quarter to take a healthy 21 points lead into half time. The Bloods would not allow another goal, and with two in the third and one in the last secured the strong victory.

Aleisha Thorne (four goals), Nat Cardimone (three goals) and Jill Chalmers (two goals) accounted for all nine of Mordialloc’s goals and Tanya Rosenquist and Ashleigh Phipps-Nelson were the best on the day.

Hannah Bowey and Ally Gilchrist were the Bulldogs best as they also added a goal each along with Emma Hamilton.

Despite inaccuracy in front of goal, East Brighton were able to hold off a short-handed Oakleigh District by four points at Princes Highway Reserve on Friday night.

It was tight in the first quarter as 2.1 to 1.4 gave Oakleigh District took advantage of their opportunities to lead by three points, despite being represented by just 15 players. Inaccuracy started to take its toll on the scoreboard for the Vampires as their 1.5 quarter to 0.2 for the Oaks saw the lead change in the favour of East Brighton by six points. It was goalless in the third quarter with five behinds to one for the Vampires extended their lead to 10 points. East Brighton would have some nervous times at the end of the final quarter as three goals for Oakleigh District gave them the chance to come out on top. But two settling goals to the Vampires, including one in the dying seconds of the match, was just enough to see them secure a thrilling victory.

Jodie Bray was responsible for two goals for Oakleigh District and Rachel McNamara, Genevieve McKinley and Alexandra Rowledge were their best.

Endeavour Hills has kept in touch with the top of the ladder side, with an impressive 82-point victory over Lyndhurst at Barry Simon Reserve on Sunday.

It was Endeavour Hills all over the Lightning from the start, with six goals to one behind by quarter time and another four goals unanswered by half time to lead by 63 points. Lyndhurst would add their only goal in the third quarter along but allowed two goals from the Falcons to see the margin push out to 71 points. The only goal of the final term went to Endeavour Hills to end a dirty day for Lyndhurst.

The goals were shared for Endeavour Hills with Rebecca Sadler, Jennifer Dean, Stacey Johnston, Samantha Richardson and Vanessa Fudalinski kicking two goals each. Renee Thomas maintained the form she had before the break with another best on performance.

Alana Pola and Natasha Billing were the Lightning’s best players, with their goal coming from Maleah Brown.

Lauren Luff was Beena’s leading goal kicker with five goals as Murrumbeena outclassed Hallam at Hallam Reserve. Alice Kovess and Aisling Muir also added three each, while Emma Morison was best on the ground. Skipper Grace Bibby was also in the Beena’s best.