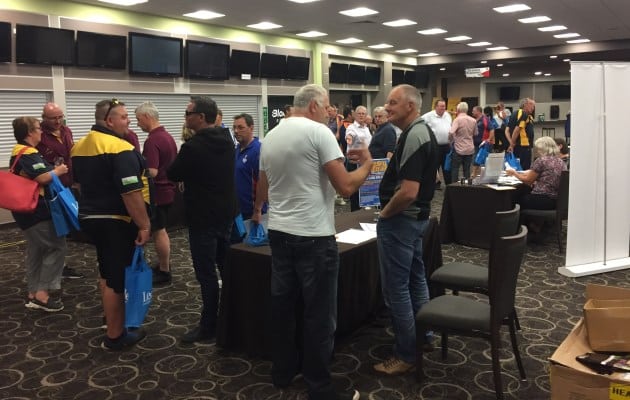 Tweet
Last night’s 2017 SFNL Tradeshow at Sandown Greyhound Racing Club proved to be the biggest and the most successful one the League has ever run.

Close to 90 club representatives attended the networking night, which featured 21 League partners showcasing their wares. Among them were new partners in Atura Dandenong, Coca-Cola Amatil, Grant Professionals, Laser Clinics Australia (Southland), MultiSkills Training and United Petroleum, who each introduced themselves to SFNL clubs for the first time.

SFNL CEO David Cannizzo said the event appeared to be the best ever for the League.

“Not only was the tradeshow extremely well attended, but the feedback received from club administrators and our valued partners was so complimentary,” Cannizzo said.

“It was so pleasing to see a great intent to collaborate between our partners and member clubs, and we hope this builds into fruitful mutually beneficial partnerships through 2017 and beyond.

“I would like to thank our partners for their generous and ongoing support, as well as our member clubs for actively engaging in the event and contributing to its overall success.”

A number of League partners have expressed their gratitude towards both the League and its clubs for their part in making the night a roaring success.

Benjamin Charles, the National Sponsorship Manager at our newest League partner, United Petroleum, praised last night's event as one of the best he has experienced.

"Regarding club interaction and organisation, this was one of the best tradeshow events run by a sporting league I have attended," Charles said.

"I am looking forward to building a solid partnership and rewarding clubs."

“The night provided a wonderful opportunity for partners to network and engage with club representatives face to face,” he said.

See the full list of prize pack winners below.

Thank you to the following SFNL partners who attended the night and/or provided special offers for SFNL Member Clubs:

The SFNL also thanks its Community Partners for their attendance last night: