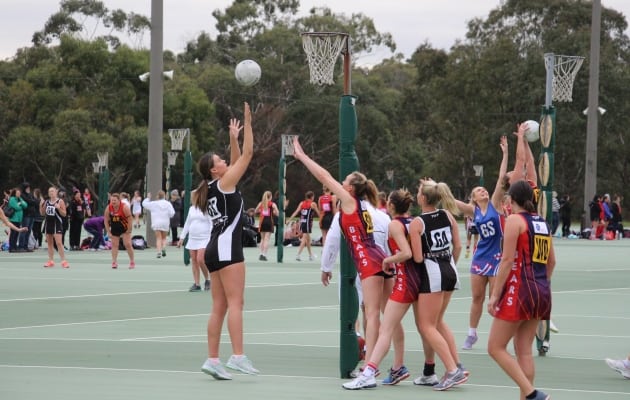 
Listen back to this week’s Nothing But Net podcast, featuring Murrumbeena's Chris Dent as the special guest, in the player above.

Round 9 saw a lot of hard work all season culminate in a win for the Hampton Park side and the Mordialloc challenge continue despite an early scare, but the usual suspects remain in pole position in Division 1, albeit only narrowly.

Hampton Park’s first victory had been coming. They have been steadily attuning to the way that netball is played in the SFNL, but on this grey, wintry June afternoon it finally translated into premiership points. The first quarter saw a contrast of styles as St Pauls employed the method of working the ball from one side of the goal circle to the other, while Hampton Park looked dangerous when moving the ball quicklly and directly to Sam White and Elly Anthony. A 13-10 advantage was a fitting reward for the work of the Redbacks in the first term, and they were not to relinquish this lead as the game progressed. The lead blew out to 25-15 before St Pauls hit back late to reduce the half time margin to six, but that’s as close as they got as Hampton Park’s defence tightened in proportion to the growth of their confidence. The final quarter saw St Pauls push their passes as they attempted to arrest the decline, but Hampton Park intercepted well, and kept the scoreboard ticking over enough to record a deserved 51-36 win.

Mordialloc seemed to underestimate the pressure that St Kilda City brought to bear in the first term, and went in to the first change 10-8 behind. The key move was that which took Lucy McKeown into defence and put Nicole Delany into the attacking circle. Both moves bore fruit instantly as McKeown gave great drive from the back court, while Delany made space for shooting partner Emily Morris while also shooting accurately herself. Mordialloc made their move in the second term to lead at the main break by 22-16, and whilst Sarah Jackson and Katie Lindqvist made several telling interceptions and Rosie Augl continued to threaten in attack, Mordialloc extended their advantage to nine at the final change. St Kilda City refused to lie down – that’s not their style – but with Sophie Durnan bossing the mid court Mordialloc were able to coast to a 44-34 victory.

An undermanned Dingley took on a Keysborough side missing Laura Agius, Amy Burns and Megan Kennedy, and it was Keysborough that looked impressive early on, with Courtney Nash and Bianca Robinson combining well. Late in the quarter however, their efforts began to flounder against the rock that was Sara Merkus, and this began a pattern that was to last the whole day. Dingley took a 10-8 lead to the first change, but Dingley started to look very impressive with their diagonal passing game in the second term to lead by six at the main break. Keysborough had to start the second half well to stay in the game, but a big turnover by Nikki Tulley which led to a Laura Piper goal knocked the wind out of their sails. A huge third term gave Dingley a 37-19 three quarter time lead, and there was no coming back from that as Dingley kept their foot on the accelerator to win by 52-28.

Heatherton and Caulfield took each other on, both missing that many players that they looked shadows of their true selves. This was always going to be a test of depth, and this was a test that Heatherton passed with flying colours. Heatherton were on the board for the first two goals, Caulfield squared the ledger at 2-2, and that was all the joy that Caulfield were to have in the first quarter as Heatherton went to quarter time leading by 20-2. There was no Natalie Billings for Heatherton, but they were able to call upon an able deputy in Ella Batish, and she played the game of her life. She was unstoppable in attack in finishing with 55 goals against a very handy defence, with Maggie Carlon also excellent loading the bullets for her to shoot and Kirsten Daley her usual frugal self in marshalling a very mean defence. Heatherton were never slowed in scoring 14, 17 and 17 goals in the last three quarters, and with key players returning in the coming weeks it’s clear that they still mean business after their 68-18 victory.

So with six games left before finals, Dingley, Heatherton and Mordialloc are fighting for top spot on the cometition ladder, all on 28 points, with Caulfield four points back on 24. St Pauls have 16 points, Keysborough and St Kilda City eight each, while Hampton Park now have four points.

There is no change at the top of Division 2 as Cheltenham continue on their merry way, unbeaten after eight matches. They took on a Dingley Yellow unit looking to stay in touch with the top four, and dispatched their challenge with clinical efficiency in recording a 44-32 win. Caulfield and Murrumbeena in second and third place squared off in the match of the day in the second tier, and in a no-holds-barred defensive battle it was Caulfield that prevailed by just the one goal, by 34-33. Caulfield take second spot from Murrumbeena by percentage only. Heatherton are looming dangerously. The multiple Division 2 champions have shaken off a difficult start to the season and are now in full flow – here they beat South Yarra by 52-34. They now lead Dingley Red on percentage after Red beat Keysborough by 44-27. In the final Division 2 battle of the day, Bentleigh looked like they could bring up their first victory but had to settle for a 52-all draw with Clayton.

St Kilda City retain the top position in Division 3, having had little trouble in defeating Lyndale by 50-25. Dingley Gold’s 45-28 win over Black Rock keeps second place for itself, and denies it the chance of replacing Heatherton in the top four after Heatherton’s 41-31 defeat against third placed Dingley Red. Elsewhere Cheltenham kept their finals chances alive by beating Caulfield by 48-37, and Mordialloc pulled themselves clear of the foot of the table, having beaten Bentleigh by 55-38.

Murrumbeena are taking all before them in Division 4. They average over 55 goals per match; this week they once made the scorers reach for the calculators in scoring 76 against Keysborough’s 28 and retain a four-point break at the top of the ladder against Heatherton Black. Black were clinical in defeating fourth-placed Caulfield Yellow by 59-36. CPL are still looking good sitting in the middle of the four. South Yarra had their moments and didn’t let CPL have things their own way, but their 49-42 loss does their finals chances no good. Springvale Districts are the nearest challengers, and their 65-34 defeat of Hampton Park doesn’t do them any harm, while Heatherton White beat Caulfield Blue by 42-33 and St Kilda City were way too good for Mordialloc by 64-25.

The top five have cleared out in Division 5, with Aspendale leading the way. The Dales beat Dingley Red by 48-30, and in doing so went four points clear of the following four sides, all of whom are supported by percentage only. Lyndhurst put on a clinic in walloping St Pauls by 95-19 to take second spot, with Oakleigh District next in line. They sent Dingley Gold from first to fourth by beating them by 43-31. East Brighton are out of the four on percentage alone after beating Black Rock by 45-24. In other results, Cheltenham beat St Kilda City by 32-25, and Heatherton beat Highett by 37-31.

Mordialloc Red are streaking away from the field in Division 6, and continued along their journey by despatching Lyndale by 53-29. Doveton Eagles had little trouble in dismissing the challenge of St Kilda City by 48-13, and in doing so have replaced Lyndale in second place. Clayton sit in fourth spot after beating South Yarra by 28-23, two points ahead of Keysborough who stayed in touch by beating Hallam by 31-21. Dingley had the closest Division 6 game of the day, beating Caulfield by 24-23, while Mordialloc White got the win that they have been threatening, belting Bentleigh by 54-9.

Division 7 is led by Dingley and Lyndhurst, both unbeaten but separated by the fact that Lyndhurst have had a draw while Dingley have had only wins. Dingley beat sixth-placed Heatherton by 49-34 while Lyndhurst beat Doveton Eagles, in ninth, by 52-32. The nearest challengers are Hampton (53-24 winners over CPL) and Murrumbeena (who beat Mount Waverley by 65-23). East Brighton kept their challenge alive with a 52-35 win over Springvale Districts, while Aspendale didn’t help their hopes by drawing 38-38 against Cheltenham.

The two Hallam sides were winners in Division 8, with Red beating Lyndhurst by 53-29 and Yellow beating Highett by 34-28. These sides make up the top four, with Red opening up an eight-point break on Lyndhurst in second. Highett drop from second to third, and now have Yellow snapping at their heels two points behind. Oakleigh District moved away from Keysborough at the foot of the table by winning by 28-25, while fifth-placed Lyndale had the bye.

Division 9 has a new leader in South Yarra. They deposed the previous holders of the crown in defeating Black Rock by 47-27. Heatherton took second place on percentage from Black Rock after their 82-8 thrashing of Clayton, and Lyndhurst make up the four two points further back through their 27-23 win over Dingley.