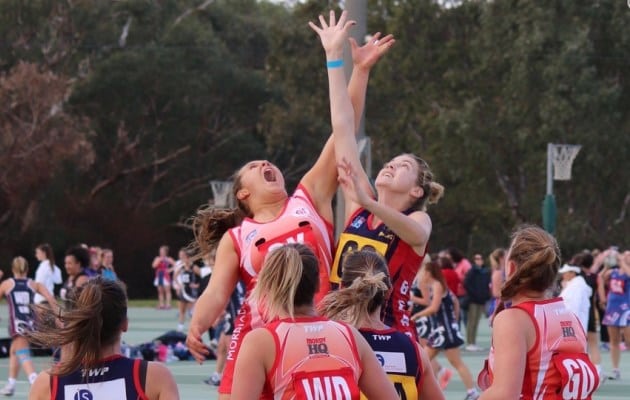 Listen back to this week’s Nothing But Net podcast, featuring Oakleigh District's Elise Jagintavicius as the special guest, in the player above.

Round 5 in Division 1 gave us an upset result, an old favourite posting their first victory of the season, and the usual suspects flexing their muscle. Netball in the south never disappoints!

Heatherton took on Hampton Park, and this one was done as a contest by 12:15 as Heatherton went to the first break 19-3 to the good. Their height was too much for Hampton Park to counter, and with their mid-court taking complete control the Redbacks couldn’t get any traction in this game at all. The lead was extended to 36-11 at the main break, and while Hampton Park hit the scoreboard with a bit more regularity in the second half they could not prevent the premiers from doing the same. Heatherton showed their class in coasting to a 68-32 victory.

Dingley were largely untroubled by a game St Kilda City outfit in scoring a 52-34 victory. The game took on a very Dingley-like pattern with the Dingoes establishing control in taking a six-goal lead at quarter time, and steadily increasing their advantage through the day. Natasha Turner and Rosie Augl posed a steady threat in the attacking goal circle but Dingley are adept at restricting the opportunities of their opponents whilst keeping their own score ticking over, and their lead was extended to fourteen at the main break. The Saints will be happy to have restricted Dingley to 21 goals in the second half while scoring 17 of their own, but the points were safe by this stage and Dingley maintained their position in the division’s top echelon.

Keysborough had played a good brand of netball in the first month of the season while not being able to claim victory, but Round 5 proved to be their time as they were too good for St Pauls. The win was based on a 12-3 first quarter as Keysborough settled the quickest, after the opening exchanges were typified by turnovers and missed opportunities. The standard improved in the second term but it was the Burras that rose to the occasion to go to half time in front by 25-12, and their lead was extended to 47-26 turning for home after a free-flowing third quarter. The St Pauls challenge was done by this stage and Keysborough were able to pull away to a convincing 63-35 win.

Mordialloc provided the shock of the round by toppling competition heavyweights Caulfield by 46-38. They established their position by coming out on top of an enthralling first quarter mid-court battle, and their shooters took advantage to the tune of 14-5 at quarter time. Caulfield steadied their ship in the second quarter after frustration had threatened to get the better of them, and won the term convincingly in cutting the deficit to one. This was also the case at the last change with the score at 31-30, but with Sophie Durnan expertly creating space and Caity de Garis and Amy Gledhill impassable in defence, Mordialloc were able to outlast Caulfield to claim a deserved eight goal win.

Dingley and Heatherton lead the pack on 16 points after five rounds, with Caulfield, Mordialloc and St Pauls a win further back on 12. St Kilda City are still well in touch on 8 points, Keysborough 4, and Hampton Park remain yet to open their account.

Caulfield and Cheltenham remain unbeaten leaders in Division 2 with both scoring wins, over Dingley Gold (44-30) and Keysborough (51-38) respectively. Murrumbeena took on South Yarra in the Division 2 match of the day, and their 46-44 victory puts them four points clear in third spot, but watch out for Heatherton. They started the season uncharacteristically slowly, but their 57-24 walloping of Clayton gives them their second straight win and fourth place. Dingley Red stayed in touch by beating Bentleigh by 49-36 in the other match.

Division 3 has started with the two Dingley sides in good shape, with Gold, having been promoted from Division 4, in top spot after their 45-23 win over Lyndale, and Red in third despite losing 41-32 to sixth-placed Black Rock. They are separated by still-undefeated St Kilda City, who beat Mordialloc by 46-33. Heatherton beat Cheltenham by 41-27 to take fourth spot, while Caulfield registered their second victory by 53-19 over Bentleigh.

Murrumbeena have been promoted from Division 5 in the regrading process, and they began their Division 4 campaign by beating Heatherton Black by 41-39 to take pole position and relegate Black to second. CPL and Caulfield Yellow are level with Heatherton Black, having beaten St Kilda City (44-35) and Caulfield Blue (44-26) respectively. Springvale Districts beat Mordialloc by 50-40; they are positioned one win further back with Caulfield Blue and South Yarra (51-26 victors over Caulfield White). Hampton Park meanwhile claimed their first win by beating Keysborough by 44-41.

Oakleigh District scored a commanding 67-25 win over Dingley Red in Division 5, having been promoted from the grade below. They share top billing with Dingley Gold (52-23 winners over Highett), and Aspendale (who beat St Kilda City by 49-25). Lyndhurst (58-22 victors over Cheltenham), and East Brighton (successful by 37-24 over Heatherton) are a win below on 14 points each, while Black Rock registered their first victory by 43-14 over St Pauls.

Mordialloc’s Division 7 side move into Division 6 to be known as Mordialloc Red. The promotion evidently did them no harm as they defeated Hallam 52-14 to be perched at the top of the table on 18 points. Lyndale sit two points further back after their 60-17 demolition of winless Bentleigh, while Keysborough (31-19 winners over Caulfield) and Doveton Eagles (50-31 winners over South Yarra), sit another two points further adrift on 14. Elsewhere Clayton beat Dingley by 36-14, and St Kilda City beat Mordialloc White by 24-21 to keep in touch with the top four.

Lyndhurst and Hampton set the early pace in Division 7. Lyndhurst made short work of Heatherton by 42-10, while Hampton also remained undefeated by beating Aspendale by 33-27. Dingley, who beat Mount Waverley by 48-34, and Murrumbeena, who were too good for Cheltenham by 41-27, make up the top four. CPL showed that they will be a threat to those above them in a comprehensive 46-20 win over Springvale Districts, while relegated East Brighton opened their account in fine style with a 70-36 win over Doveton Eagles.

Hallam Red lead the way in Division 8 after eclipsing Oakleigh District by 46-22. Their closest challengers, Lyndhurst, had the bye, while Highett maintain the pressure by beating Lyndale by 30-27. Hallam Yellow joined the competition this week after being demoted from Division 7, and they kick-started their season by beating Keysborough by 47-19.

The competition now takes a week off as our Interleague representatives travel to Boort to take on the North Central Netball League. Good luck to all players as we attempt to bring glory to the South.