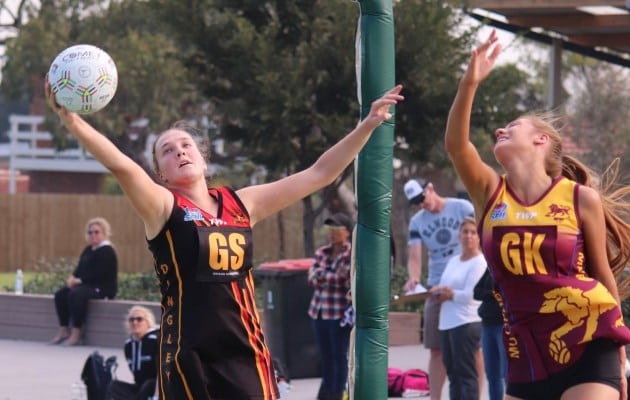 As 800 netballers looked up to the heavens and wondered what that yellow thing was and how to play netball beneath it, fair weather greeted the combatants for Round 2. The new challengers to the established order in division one showed that they have the potential to mount a very strong challenge indeed.

Caulfield took on two-time premiers Heatherton, who quickly skipped away to a 3-1 lead. Their two main shooters were late withdrawals but Bayley Mifsud showed her versatility in stepping into the breach. Caulfield soon steadied, and with Beth Miller taking the lead shooter’s role strode to an 11-9 quarter time break. In the second term the Bears really started to assert their authority, with Domica Wescombe dominating before a heavy collision, and extended their lead to 25-15 at half time and 38-26 at the final break. Heatherton threw Maggie Carlon into the centre and she worked well with her attackers, but whilst the Tunners always kept battling away Caulfield won every quarter to post a 51-32 triumph.

Dingley defeated Keysborough by 36-18 in a victory that was far less comfortable than the margin suggested. These are two of the hardest running mid-courts in the division and they pushed each other to the final siren, and although Keysborough were beaten they will have found plenty to encourage them here. A 10-2 first quarter proved decisive as the Dingley mid-court did not allow Keysborough to get their passing game into gear. Keysborough stepped up their work rate after quarter time and began to gain some traction, winning the second quarter and giving them hope, but Dingley are a very difficult side to play from behind and they steadied after half time to emerge victorious.

Mordialloc backed up their round one victory with another win over a St Kilda City side that gave a lot of cheek, and will be a match for all teams in this competition. A close and tight first quarter saw Mordialloc lead by the barest margin, and although they assumed a measure of control in the second term, City kept pushing. Mordialloc could not increase a six-goal quarter time lead in the third stanza as the Saints were comfortable with a patient build-up with Chloe Ballard controlling the tempo of the game. Caity de Garis made several key interceptions for the ladies in red, and their combinations are beginning to grow fluent, but the City girls were asked to “dig in”, and they certainly dug deep, restricting Mordialloc to a margin of 35-26.

St Pauls took on Hampton Park in the final match of the round in a competitive battle between two young sides with lots of potential. St Pauls skipped away to an early 11-7 lead, largely on the back of an impressive shooting performance from pocket rocket Zoe Lythgoe, which was increased to a five-goal margin at the main break and eight goals turning for home, but Hampton Park were not done with. Alicia Parissis started to bring down some good intercepts and the Redbacks started to make inroads by moving the ball efficiently to their shooters. The final siren came with Hampton Park embarking on a Winx-like run and closing fast on their opponent, and had the game gone a couple of minutes longer the result could well have been different, but St Pauls held on to record a 42-41 victory.

The 2018 Division 2 campaign began this week after last week’s false start, with Murrumbeena and Cheltenham making their debuts, and recording opening day victories. Mel Ades’ 2017 Division 3 premiers took on Murrumbeena and were by no means disgraced in succumbing by 39-29. Cheltenham had an even tougher task against the perennial yardsticks Heatherton and were very impressive in being successful by 45-34. Caulfield franked their 2017 grand final performance by beating a highly-fancied Bentleigh outfit by 46-38, while fellow newcomers Clayton looked similarly impressive in knocking over Keysborough by 31-19. Dingley Red recorded the largest margin in a competitive opening day, with a 47-31 victory over South Yarra.

Dingley looked very strong in racking up 61 goals in response to Bentleigh’s 26, in doing so taking the early competition lead in Division 3. St Kilda City joined them on eight points with a strong 43-31 defeat of a Heatherton side making their 2018 debut after a Round 1 bye. Mordialloc got their season moving by beating Hampton Park by 47-27, while Black Rock beat Lyndale by 29-23 to open their account.

Division 4 saw some free scoring, particularly by Dingley after they put Black Rock to the sword by 72-11. Cheltenham tallied 46 goals while beating CPL’s 26, St Kilda City were too good for Keysborough by 43-25, while Heatherton White 43 beat Caulfield Yellow 32. Elsewhere Caulfield Blue 42 outlasted Springvale Districts 34, and Heatherton Black showed a little too much polish for South Yarra, winning by 35-26.

Large margins were the order of the day in Division 5, with only Dingley Red’s 41-38 eclipsing of St Kilda City proving to be a close contest. Caulfield put up an early fight against Highett before going down by 49-24, while Lyndhurst (73-13 over St Pauls), Mordialloc (53-11 over Bentleigh), Murrumbeena (55-12 over East Brighton), and Dingley Gold (54-14 over Cheltenham), recorded big wins.

Reigning Division 7 premiers Oakleigh District made their start in Division 6 with a 51-21 win over East Brighton. Aspendale showed early promise in beating South Yarra by 48-29, while Hallam will be very encouraged by their 35-22 defeat of early fancies Dingley. Clayton beat St Kilda City in a tight affair by 20-14, Lyndale 37 were too good for Keysborough 24, while Doveton Eagles completed the round by seeing off Mordialloc by 39-19.

Hampton take the early lead in Division 7 with a 33-11 win over Hallam, with Mordialloc also impressive in a 42-21 win over Murrumbeena. Doveton Eagles continued a rare negative day for Heatherton with their 40-21 victory, CPL made short work of Cheltenham with a 44-29 triumph, while in other games Aspendale outlasted Mount Waverley by 34-24 and Lyndhurst 28 beat Springvale District 15.

Division 8 saw Dingley out of the blocks smartly in beating Lyndale by 50-14. Keysborough 31 were a little too composed for a plucky Oakleigh District 10. Highett were impressive in tallying 45 goals against Springvale Districts’ 16, while Hallam won the close one by 46-41 over Lyndhurst.

Dandenong’s forfeit against Heatherton meant that there were only three matches in Division 9. Springvale Districts 28 beat Dingley 17, South Yarra 55 were too strong in a good attacking game for Clayton 31, and Black Rock 36 held their poise to defeat Lyndhurst 29.