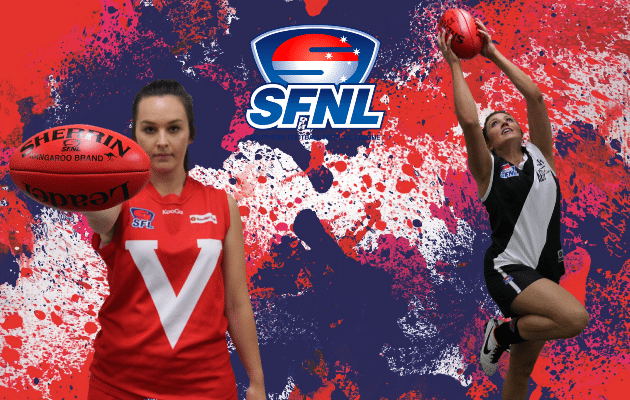 Tweet
From 2017 onwards, the Southern Football Netball League will form part of the South Eastern Women’s Football Collective, a collaborative governing body that will run a senior divisional women’s football competition in the southern and eastern suburbs of Melbourne.

The SFNL, in conjunction with AFL South East, the Eastern Football League, and AFL Yarra Ranges, will jointly manage and govern the new regional women’s competition, which will feature teams from the recently disbanded Victorian Women’s Football League (VWFL), as well as both existing and newly formed women’s teams from local competitions, in a three-tiered divisional structure.

These divisions will align existing local and former VWFL clubs and teams based on their relative strength, longevity and structure to help all clubs find an appropriate level of competition and ensure a competitive balance within each division. AFL South East will take the lead in managing the top two regional divisions, while each of the SFNL, EFL/Yarra Ranges joint venture and AFL South East will be responsible for the administration of their own individual third tier development competitions. These development competitions will consist mainly of new teams with a focus on assisting clubs through the initial establishment phase to ensure each team’s future sustainability.

SFNL CEO David Cannizzo said he was excited by this new collaborative approach to football administration and that the League is looking forward to working with other local competitions to further entrench senior women’s football in the region.

“It’s a refreshing way of thinking,” Mr Cannizzo said. “Through collaboration and shared resources with other local competitions, we have come up with a brand new administrative structure for the betterment of community football, and in particular women’s football.

“With the inaugural AFL Women’s competition being launched in February, women’s football is only going to get bigger, so it is exciting to be a part of this new collective and help facilitate the growth of female football at the grassroots level.”

Several SFNL clubs have already expressed a desire to establish a new women’s team next year, while other clubs with existing teams, including Mordialloc, Port Melbourne Colts, Endeavour Hills and Hallam, will also compete within the South Eastern Women’s regional competition divisions.

Given the strong uptake of prospective women’s teams from within the SFNL, the League has been focussed on ensuring the success of its inaugural female development competition.

“We have been delighted with the attendance at the women’s club development sessions, with up to a dozen clubs striving to enter a team in the SFNL women’s development competition for next year,” Mr Cannizzo said.

“We have also had great attendance from interested players at our recent women’s football skills sessions – the latest of which is on this Saturday morning – so there is plenty of excitement around our development competition and from our point of view it’s all systems go.”

The final SFNL women’s skills session for 2016 will be held at Moorabbin Reserve on Saturday 10th December from 10am, and will feature guest appearances from Collingwood women’s player Alicia Eva and St Kilda Football Club’s Head of Player Development Simon McPhee. Players of all abilities are encouraged to attend the free session.

For more information on the SFNL Women’s competition or to register your interest as a player, visit sfnl.com.au/womens-football.