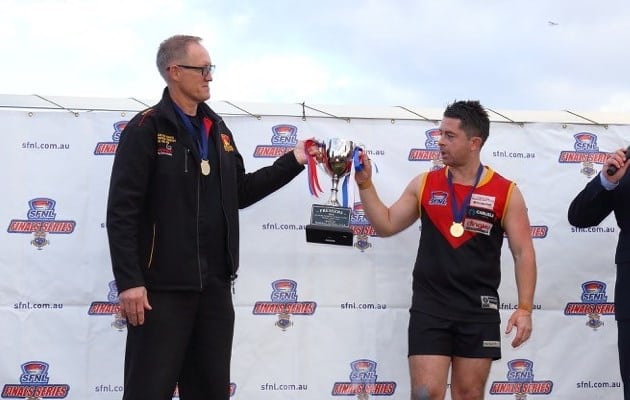 Dingley have claimed back to back Division 1 premierships with a 107-point victory over Bentleigh at Springvale Reserve. Chris Horton-Milne claimed the Meneilly Medal as the best on ground and Daniel Farmer slammed through five goals as Dingley sent off retiring champion Tony Lavars in the best possible fashion. Scott Lawry battled hard for Bentleigh as they could only muster six single goal kickers.

Gambling's Not A Game Division 1 Reserve

St Kilda City came from behind to deny Hampton the Under 19’s premiership by four points. Vinh Dang and Jesse Firebrace were influential in the comeback, with leading goal kicker Mykelti Lefau kicking three goals. James Gascard was Hampton’s best and Thomas Burley and Ryan Carroll kicked two each.

Port Melbourne Colts kicked away from Caulfield in the third quarter to claim a 44-point victory and maintain their undefeated season at Jack Barker Oval. Steven McAnulty won the Meneilly Medal as best on ground, while Jason Butty and Mitchell Clarke combined for seven goals for the Colts. Jake Buggy was Caulfield’s best in defeat as he also added two goals.

Seven unanswered goals in the last quarter gave Port Melbourne Colts two from two flags as they defeated Skye by 48 points. Ruckman  Nathan Davey was the Colts best with Jason Clarke kicking four. Nathan Naughton was gallant for the Bombers.

A tight back and forth first half blew open after half time as Cerberus kicked ten goals to two in the second half to defeat Skye by 62 points. Thomas Borrillo dominated up forward as he slammed through seven goals, as he got great support by best on ground Cameron Baker. For Skye, Glenn Fielding was their best and John Hernan kicked three goals.