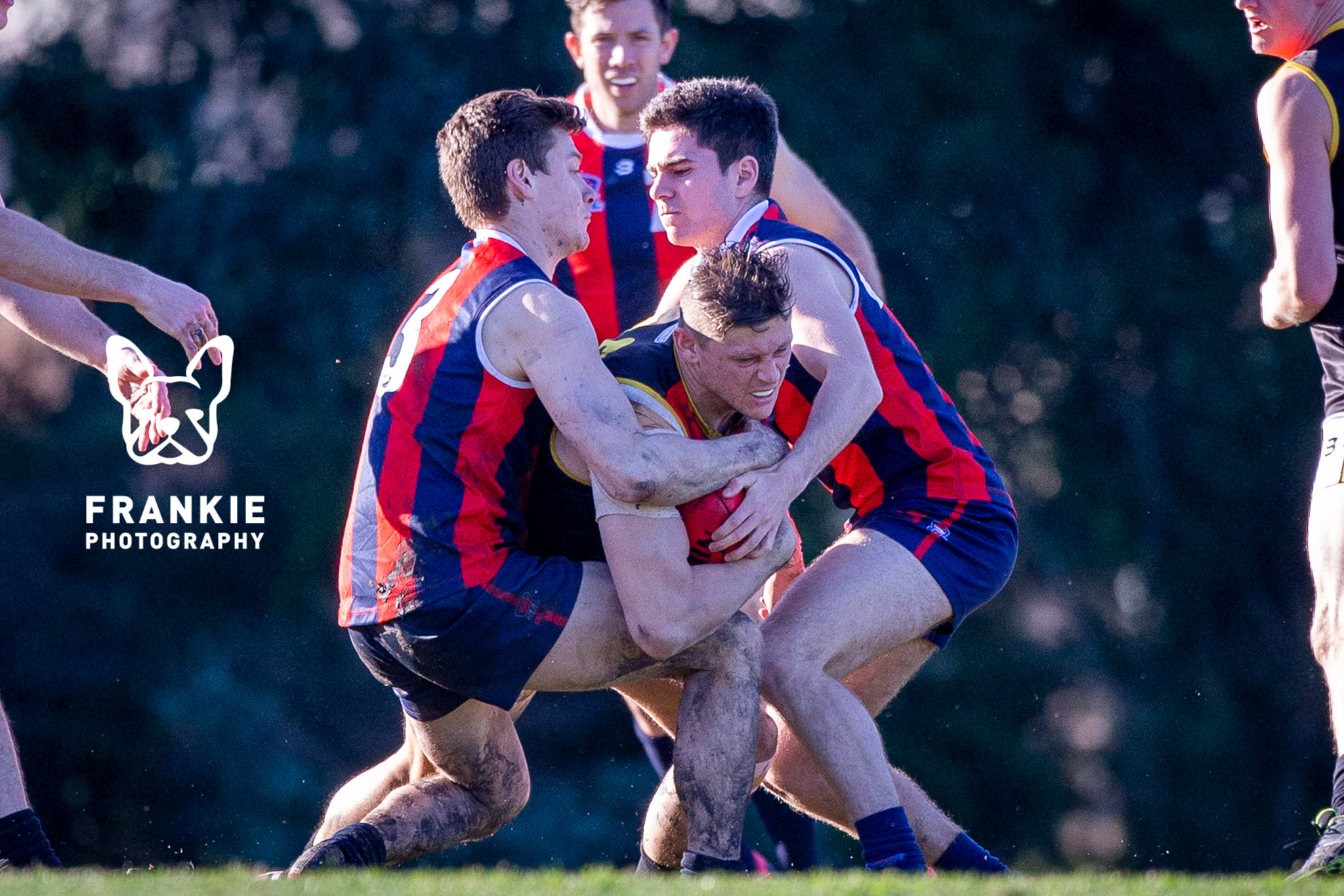 East Malvern and Dingley has given division one its first draw of the season, with the two sides finishing locked at 53 at Dunlop Reserve.

The Dingoes were in control for the majority of the game, until the final term when the Panthers booted three goals to one to erase a 14-point three quarter time deficit.

Chris Carey was the best for the host, while Danny Ades starred for the visitors.

Top of the table Cheltenham was too good for Mordialloc at Jack Barker Oval, with Sean McLaren leading his side to a 27-point triumph.

The Rosellas led at every change and were always able to keep the Bloods at bay, with McLaren’s three-goal burst helping him towards best on ground honours.

A five-goal haul from best afield James Sziller has helped St Pauls hold off Port Melbourne Colts by five points at McKinnon Reserve in round 13.

The Dogs led by 11 points three quarter time, but held on in the last despite being kept to just three behinds, and while the Colts booted the only major of the term, were unable to take the lead.

St Kilda City has broken its road hoodoo with a 16-point victory against Oakleigh Districts at Princess Highway Reserve.

The Saints did it in tough fashion a well, trailing by 31 points at quarter time before inching their way closer during each term, with a four-goal final quarter steering them across the line.

Bentleigh has climbed back into the top five following a decisive26-point win against Highett at Turner Road Reserve.

A seven-goal opening half was enough to secure the four points for the Demons, who enjoyed strong performances from best afield Matt Troutbeck and three goals from Joe Colaciello.

Despite being held scoreless in the first term, Murrumbeena has come away with an 88-point win against Skye at Carrum Downs Recreation Reserve.

The Beena took control during the second term with a six-goal quarter, before piling on another nine after half time, with Nick Brazil starring with five majors.

Springvale Districts has come home in a thriller against Hampton at the Toolbox, winning by just five points in a blockbuster matchup.

While the Districts led at every change, and by 20 points at three quarter time, the Hammers were determined not to go down without a fight and booted three goals to one in the final term, but just fell short at the final siren.

Sam Raru and Craig Keenan were Springvale District’s best while Guy Timms was impressive for Hampton.

A seven-goal second quarter was enough to spur Caulfield across the line against Heatherton, to the tune of 35 points at Ross Street Reserve.

The Bears’ seven second quarter goals were the only ones kicked in the first half, with only four kicked during the remainder of the game as the visitors won comfortably, with Adam Ballard best afield in the ruck.

Doveton Eagles has roared back into the top two, with a demolition job of premiership hopeful Keysborough at Power Reserve, winning by 68 points.

The Eagles led by just one point at quarter time, before a six-goal to one second term generated a 34-point half time lead, with the hosts slamming home another 12 goals to six in the second half.

Of the six multiple goalkickers, Adam Read was the best with four while ruckman Cameron Carmody was best on ground while Corrie Wilson starred in his 350th game.

Chelsea Heights has caused a minor upset, defeating East Brighton by 20 points at Hurlingham Park in round 14.

The Heighters produced one of their better performances of the season, booting six goals in the first half to establish a 25-point half time lead, before holding on in the second half, with Jordan Peryman starring for the victors.

Hampton Park has come away with a comfortable victory during its round 14 match on the road to Essex Heights Reserve, defeating Ashwood by 60 points.

The Redbacks trailed by eight points at quarter time after being held goalless, before piling on eight majors in the second term to go ahead by 39 points at the main break.

The visitors were in control after that and produced another seven goals to two after the main break to secure the four points.

Clayton secured its 10th victory of the season in comfortable fashion, defeating Cerberus by 72 points at McAuliffe Oval on Saturday.

Despite inaccuracy in front of goal, the Clays were in control right from the word go, finishing the game with 31 scoring shots, with Dean Evangelista booting three goals while Nick Parisi was best afield.

Seven goals combined from forwards Sam McLean and Jarrod Marolla was enough for Endeavour Hills to keep Black Rock at bay during their round 14 clash.

Playing at McDonald Reserve, the Falcons were in complete control throughout the match, booting six goals in the first half, before piling on another seven in the second.

McLean finished as the visitors’ best alongside Daniel Soar and Nathan Reid.

Lyndhurst has come away with an easy win against Dandenong, defeating the Redlegs by 120 points at Greaves Reserve.

The Lightning were simply too strong for the hosts, booting 10 goals in each half to complete the rout and go one step closer to securing the minor premiership.

Hallam caused one of the biggest upsets of the season in division four, defeating second ranked Frankston Dolphins by three points at Hallam Reserve.

The Hawks looked to be in trouble early when they trailed by 23 points at the first chance, but clawed their way back throughout the remainder of the contest, holding the Dolphins to just three goals after quarter time, while booting six themselves.

Mitch Wood was sensational with two goals in a best afield effort for the Hawks, alongside Jack Barrie-Sewell.

South Yarra has scored an emphatic victory against Moorabbin at Leigh Park, winning by 79 points to secure their spot in the top three.

The Lions were ahead by just 23 points at half time, before piling on seven goals to one behind in the third term to blow the margin out, with Brandon Bird booting four goals while Patrick Johnson was impressive.

Carrum Patterson Lakes has scored a big win against Lyndale in round 14, coming away with a 57-point win at Roy Dore Reserve.

CPL was inaccurate in front of goal at times during the game, but did enough with a five-goal burst in the second term to secure the four points, with Alex Wilson starring with four goals.