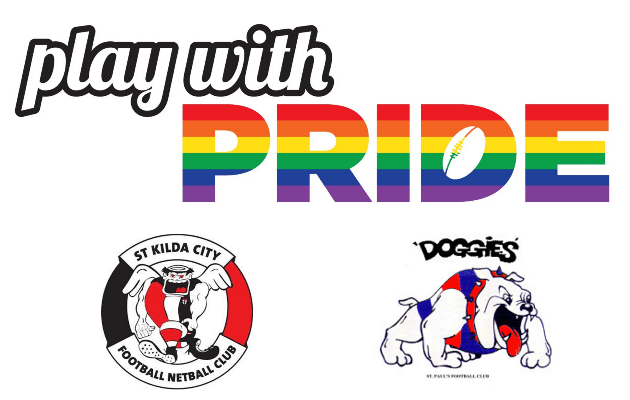 This Saturday, St Kilda City and St Pauls will create SFNL history by competing for the inaugural Pride Shield at the Peanut Farm in support of the LGBTI community.

The day will have a distinctly rainbow feel as the two clubs and the league lead the drive towards widespread acceptance and inclusion of people of all genders and sexual orientations in mainstream society.

It will also be a special day for the Saints’ Division 5 Netball Coach Te Ua Houkamau, who will sing the Australian national anthem before the commencement of the senior match.

Houkamau, himself a gay man and a talented opera singer, has performed the anthem of his native New Zealand on multiple occasions and said he was excited to be asked to perform before an event so close to his heart.

“I’ve sung the national anthem at sporting events and New Zealand Parliament and all that kind of stuff,” Houkamau, 32, said.

“(Saturday’s anthem performance is) kind of a big deal to me, first of all being a gay man and being asked to do it.”

Houkamau, who is of a Maori background, hails from the small country town of Hicks Bay on the east coast of New Zealand’s north island.

He migrated to Australia nine years ago to join the cast of the Phantom of the Opera and has remained here ever since.

And it was on this side of the Tasman that he first came out as gay after meeting his now ex-partner. The pair were together for seven years before their split last year.

“I think I always knew (I was gay),” Houkamau revealed.

“When I moved over to Australia, I was like, ‘yeah, I think I am’, but never had a boyfriend or anything like that. And I only really came out because I found someone over here and I went, ‘well, I have a reason to come out now’.

“(But) my sexuality doesn’t really drive who I am.”

When Houkamau announced his homosexuality to his close friends and his family back home, the overwhelming majority were thrilled for him and incredibly supportive.

But unfortunately, not every member of the LGBTI community receives the same support and many don’t feel comfortable coming out, often fearing backlash and discrimination from narrow-minded sections of the community. This is an attitude that simply has no place in today’s society.

Houkamau has always been passionate about netball, playing the sport back in primary school, and the move to Melbourne has allowed him to reignite his passion for the sport. Over the last few years he has both played and umpired social netball before turning his hand to coaching earlier this year through a family connection at the Peanut Farm.

“One of my cousins (Tui Bristowe) who played for St Kilda (City) netball team, she asked me if I would be interested in coaching,” Houkamau explained.

“I kind of grew up around it (netball), so when the opportunity came to coach I decided it would be something interesting to do.”

Houkamau has loved his first year at the helm, despite his team narrowly missing out on a finals berth, and has praised the club for their acceptance of his homosexuality.

“It has been (wonderful being at a club that’s been so supportive), and I knew it was going to be a challenge, but again, there’s also been the support of my girls and my team,” Houkamau said.

“At the start, I was a little bit more apprehensive as to what was going to happen, you know, going out to club functions and stuff like that, but yeah, nah I’ve had nothing but good support so it’s been good.”

Houkamau said that being born across the ditch has also been a blessing, as the large contingent of New Zealanders at the club, particularly in the Saints’ netball teams, has made it easier for him to feel welcome.

“There’s a thing with Kiwis, if you want to say, in the club, so I think everyone’s focus is more on the New Zealand part of me than the gay part,” Houkamau revealed.

Despite the fact that netball is a largely female-dominated sport, Houkamau has always felt at ease playing and umpiring in social competitions. Most netball umpires at this level are men, and a large percentage of them are openly gay, which Houkamau said has made it easier for him to feel comfortable, insofar as he could “be with a bit of a community”.

Football clubs, on the other hand, haven’t traditionally been open as netball clubs in welcoming and including gay players. The pervading old-school macho attitude still lingers in many places, leading most gay footballers, and indeed a number of gay athletes from other codes, to remain closeted with their sexuality.

There is little doubt footy clubs these days, much like society, have become much more accepting of gay players, especially through the increasing presence of the more open-minded younger generation. However, there is still work to be done before gay players feel more comfortable coming out in this environment.

“Compared to where we were five, 10 years ago, it’s been a huge change, and it will probably be in five or 10 years’ time before that acceptance will become more normal,” Houkamau said.

“As it becomes more normal… I think more and more gay, bi, trans or those type of players would feel more comfortable to come out.”

Houkamau believes the biggest step St Kilda City has made towards breaking down the stigma of homosexuality has been the inclusion of netball into the football club four years ago, a trend that has been widely embraced by the SFNL member clubs.

“I’ve not really been around a footy club. I’ve been around netball and I think netball has been pretty open to it, and it has been open to it for quite a while,” Houkamau said.

“I think with the inclusion of netball into footy clubs… it’s opened people’s eyes just to say, ‘well, actually, you know, you can be gay and still be good at sport and thrive on what you do and it doesn’t drive the person who you are.’

“So having netball as part of footy clubs definitely helps, especially at St Kilda City. It’s kind of relaxed.”

This Saturday is not only a huge day for the St Kilda City Football Netball Club, but a ground-breaking night for the AFL with St Kilda taking on the Sydney Swans at Etihad Stadium in the first ever AFL Pride Game.

The AFL and the two clubs have been universally praised for taking the lead in using sport as a vehicle to bring the issue of discrimination of the LGBTI community into national focus, and Houkamau said that the mainstream media coverage of this historic game would be of great benefit to the LGBTI community.

“The more it’s in the media, the more people are exposed to it, the more normal it is, if you want to call it normal,” he explained.

“It desensitises everyone from the whole perception of having gay people within the community is a bad thing.

In time, Houkamau hopes this initiative can blossom in to a dedicated themed round, both at elite and community level, much like Indigenous Round and Multicultural Round have become important permanent fixtures on the AFL and SFNL calendars.

But for now, Houkamau is immensely proud of his club’s trail-blazing stance in supporting the LGBTI community and its efforts in creating a warm, welcoming and safe environment for people of all sexual orientations and racial, religious, cultural and socio-economic backgrounds.

“When Kate (Foster, St Kilda City Netball Coordinator) told me about it, it does make me feel proud of the fact that I’m with a club that is very open and very receptive to the fact there’s all types of people within the club,” Houkamau beamed.

“It’s a major standpoint within the footy and netball community, the fact that, again, netball is very open. Football isn’t (yet), but it’s getting there.

“Being involved in everything like that and being pioneering to push this makes me, as a gay man, pretty proud.”