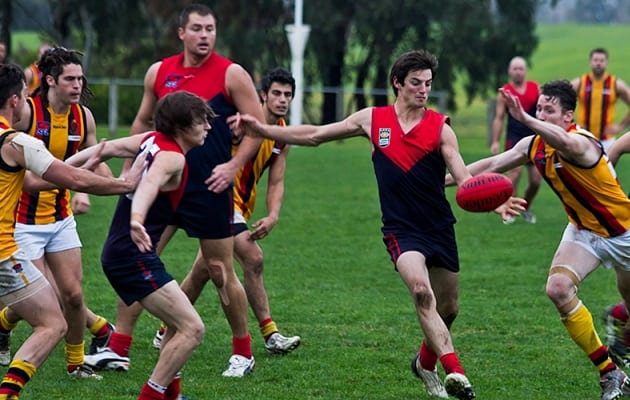 Round 8 saw plenty of good action as teams tried to grab a win before the week off.

They're back! The Vampires have returned to the form that saw them win the 2012 premiership with a thoroughly impressive 80 point victory against a lacklustre Clayton side. The Vampires kicked 14 goals to 1 as their midfield were too much for Clayton to handle. It was the usual suspects who did the damage for the Vampires; Barry Hope and Dean Williamson leading the way in clearances while also moving up forward kicking 2 goals each.

St Pauls continued on their merry way with another dominating performance, this time against Highett. The ladder leading Doggies were too much for a Highett side, who need to pick up their game if they are going to avoid relegation. Rohan Best was good up forward for St Pauls, kicking 4 goals.

Close but no cigar! Heatherton put in their best performance of the season in a tight game against East Malvern at Ross Street Reserve. Though the Tonners weren’t able to get the 4 points they pushed East Malvern from start to finish and a win isn’t too far away. A good game of footy despite the low scoring from both sides. Trent Hotten lead the way for East Malvern with 2 goals.

Chelsea Heights continued their good form this season with a comfortable win against Cheltenham in Round 7. After a tightly contested first half, the Heighters blew the game open with a 5 goal to zip 3rd quarter. The win sees them trailing Dingley only by percentage as they fight for a top 2 spot. For Cheltenham, they have some work ahead of them if they are to play finals footy. Luke Manders put in another strong performance up forward for the Heighters with 5 goals.

A 9 goal second half saw Dingley record a 25 point victory against a gallant St Kilda City side at the Peanut Farm. An upset was in the making as Dingley only lead by a point at half time, but inaccurate kicking in the 3rd quarter cost the Saints as they kicked 7 behinds to Dingley's 4 goals. The loss puts the Saints 3 games outside a top 5 spot and while anything is possible, the Saints are staring down the barrel of two straight seasons out of the finals. For the Dingoes, Bret Lavers starred with 4 goals.

DIVISION TWO with THE FOOTY TRAGIC

Well after the weekend off at the snow, we reach the half way point of the season with Round 9.  Round 8 went the way of the favourites (well my selections anyway), except for 1. Still 4 out of 5 is heaps better than 1 out of 5.

The first game saw Bentleigh handle the Caulfield Bears without too much heartache. Bentleigh held on to top spot and gave their percentage a bit of an increase. It was all one way traffic. The Bears will need to improve, whilst Bentleigh is just purring along nicely.

South Yarra hosted Hampton, and although Hampton took home the bacon, I am sure their coach wouldn’t be completely satisfied. South Yarra were well and truly in the game at 3/4 time, but Hampton ran all over them in the final stanza; but this is where they shot themselves in the foot, kicking 3 goals 8 against 2 points! Had they kicked straighter it would have made a happier coach (and supporters), because they have games and percentage to make up if they are going to make the final five.

The next game saw my only error in tipping.  I did say that Oakleigh District would bounce back but I thought Murrumbeena’s home ground advantage would sway the game their way. Oakleigh led at every break and proved they have the goods; now all they need is to develop some consistency and maybe bigger things may be in store. I still have trouble working out Murrumbeena though; they also need to work on consistency if they are going to be a force in the finals.

Springvale and Mordialloc found it hard to score at Newcomen Rd. The game was there for the taking at 3/4 time, Springvale Districts finishing the stronger and Mordialloc will be wondering if they have blown a chance here. Only 13 goals between them shows the back lines were dominant, even though conditions weren’t ideal. It will be interesting to see if Mordi can turn the tables in the return bout later in the season.

The final game saw Moorabbin taking on Skye at Widdop Crescent. Moorabbin has managed a couple of wins in a row now and are looking increasingly comfortable in Division 2. The game was all over at half time and it was as much due to Moorabbin’s defence as anything else, as they kept the Skye forwards to 2 lousy goals!

DIVISION THREE with 'GOOD' WILL HUNTER

Melbourne’s fickle weather made conditions tough for all football sides last Saturday. But it certainly helped produce some tough, hard-fought contests and a few interesting results in Division 3.

Lyndale pulled off one of the boilovers of the season to upset the previously undefeated Mount Waverley at Barry Powell Reserve. As expected the Mountain Lions started strongly and led at every change. But with Damien Wilsnach and Matt Stuart leading the charge the Pumas rose to the challenge and booted five unanswered goals in the final term to pinch a season-defining 20-point victory.

The Mountain Lions’ loss leaves Doveton as the only remaining undefeated side. They continued their winning streak with a comprehensive 11-goal demolition of Hallam at Power Reserve. The Eagles started in devastating fashion with a seven-goal opening term blitz. Although the Hawks won the second term, the result was never in doubt as Corrie Wilson again claimed best afield honours with a six-goal haul for the home side.

Carrum Patterson Lakes snuck home over Sandown in an absolute thriller at Roy Dore Reserve. The Lions led comfortably in a low-scoring contest for most of the afternoon, before the Cobras lifted in the final term. But they couldn’t quite get over the line, with Carrum Patterson Lakes keeping them at bay and holding on for a nail-biting 3-point win. Warren Judd and Jordan Stephens led the way for the victors.

At McDonald Reserve, Black Rock put in a commendable effort against Ashwood. The Jets held a 9-point advantage at the main interval, before a six-goal third term saw the Magpies take control by the final change. Although they held the visitors goalless in the last quarter, Black Rock couldn’t bridge the gap and fell just eight points short. Ashwood’s Paul Wineberg continued his outstanding season with another brilliant performance.

Endeavour Hills slumped to its’ eighth straight defeat with a 29-point loss to Dandenong at Barry Simon Reserve. The Falcons fought hard in the sloppy conditions, but the Redlegs were just too strong with Regan Hall and Steven Young the standouts.

UNDER 19s with 'GOOD' WILL HUNTER

Hampton is back in town after registering a big win over Clayton. The Hammers led in a tight contest to halftime before booting 11 goals to one in the second half to run away with the game. Riley Gorringe-Dennis kicked four goals to be one of the best afield for Hampton. But one shining light for the Magpies, Jordan Hall, was awarded the Shooting Star nomination after a stellar performance.

Bentleigh claimed a much-needed win over Chelsea Heights at Beazley Reserve. The Demons were red-hot from the get go, and had 10 individual goalkickers in its thumping 52-point win. James Watts and Liam Hogton-Hewish starred for Bentleigh.

Skye remains unbeaten after downing Dingley at the Hangar. Both sides went goal-for-goal for the first three quarters before the Bombers booted five unanswered majors in the final term to win by 41 points. Darcy Merlo and Brendan Weighell were outstanding for the home side.

At McKinnon Reserve, St Pauls dominated from start to finish in a big win over Carrum Patterson Lakes. The Doggies kept the winless Lions goalless after quarter time as they increased their lead at every change. Carl Herbstreit had the ball on a string all day to be among the best for St Pauls.