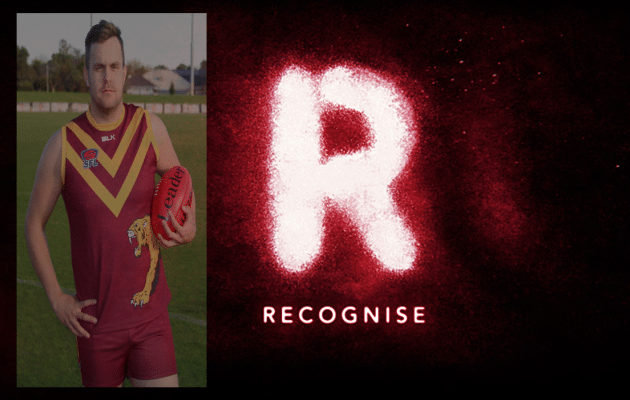 Tweet
Throughout the 2015 Indigenous Round, The Southern Football Netball League is supporting the Recognise campaign.

The Recognise campaign focuses on the push to recognise Aboriginal and Torres Strait Islander peoples in Australia’s constitution and to ensure there’s no place for racial discrimination in it.  For more information about this campaign, please visit www.recognisethis.org.au

SFNL Journalist Will Hunter spoke to Lyndale’s Alex Kerr about what this round means to him;

Every young footballer has dreamt of one day performing in the middle of a packed MCG before a crowd bathed in the colours of two of the AFL’s biggest and most famous clubs.

Lyndale’s Alex Kerr is one local player who has made that dream a reality. However, despite his undoubted on-field talent, it wasn’t his skills with the Sherrin that took him to the home of football.

Instead, the 24-year-old performed a ceremonial indigenous dance on the hallowed turf before the AFL’s annual Dreamtime at the ‘G clash between Essendon and Richmond last year as part of the pre-game festivities.

It is an opportunity that Kerr is extremely grateful for as he is immensely proud to represent his people’s culture and heritage on the big stage.

“My culture is everything to me,” the Pumas star said on the eve of the Southern Football Netball League’s Indigenous Round.

Last year was not his first appearance at the AFL’s Dreamtime match either. In fact Kerr has been dancing since he was six and has been lucky enough to perform at some of the world’s biggest sporting events.

“I did the Dreamtime (game) last year and I did that for about four years,” he said.

Kerr’s heritage is with the Wurundjeri people, the traditional custodians of the land that is now known as the city of Melbourne.

His maternal grandmother was born on the Coranderrk mission in Healesville, and his mother, Diane, is a Wurundjeri Elder and a prominent figure in the indigenous community.

“She’s an Elder of pretty much the whole of Melbourne,” Kerr said.

Kerr will again take part in this year’s Dreamtime match on Saturday night, albeit in speaking capacity rather than dancing.

His mother will also play a pivotal role in the pre-game celebrations.

“I’m doing the Welcome to Country for the VFL Dreamtime game. And then we’re off to Fed Square to do The Long Walk and then my mum will do the big one at the ‘G,” Kerr said.

“(But) most of the celebration is done at Fed Square, so that’s a big day there with music and all that kind of stuff.”

Kerr said last season’s Dreamtime match featured a traditional celebration dance and a speech from former Bombers champion and indigenous spokesman Michael Long before the opening bounce, and he expects a similar build up this year.

Through his mother’s vast network of friendships and connections, Kerr has got to know Long personally, as well as other indigenous greats of the game.

“My mum knew Gavin Wanganeen pretty close so I used to see him quite a lot and Byron Pickett (too).

“(And) David Wirrpanda from West Coast. He’s actually my foster brother’s brother so I was really close with him. I went to the Grand Finals with West Coast (and) Sydney and he took us into the rooms and all that. So I was pretty close with him.”

Inspired by the work of Long and the AFL, Kerr has himself put time and effort into running programs and workshops outside of football to benefit the indigenous community.

“I’m more into my cricket, so I run a lot of cricket clinics and get a lot of Aboriginal kids into school through cricket,” he said.

The Pumas’ gun centre half back said he always relishes the opportunity to represent his heritage on the footy field during the SFNL’s Indigenous Round and he seems to save his best performances for this time of the year.

However, a hamstring injury has sidelined Kerr since Round Two, and he now faces a race against the clock to be fit for his side’s away clash with Black Rock on Saturday afternoon. But he was hopeful he could make his return this week and said he was doing everything he possibly can to get up for the special game.

“We’ll see what happens but I definitely want to be up for this round,” Kerr said.

“I tend to get pretty pumped for indigenous week. Last few years I’ve played well on Indigenous Round.”

Kerr is an unequivocal supporter of the Indigenous Round concept, both at AFL and SFNL level, and believes that many people don’t understand the profound impact that this round, and the AFL’s Dreamtime game in particular, has had within indigenous communities.

“Dreamtime is a great opportunity to express our culture and showcase to the world our talent through sport,” Kerr said.

“And what most people don’t know, showcasing the indigenous talent right through Australia creates a ripple-like effect in our communities and makes our younger people more motivated to achieve their goals, no matter what they are.”