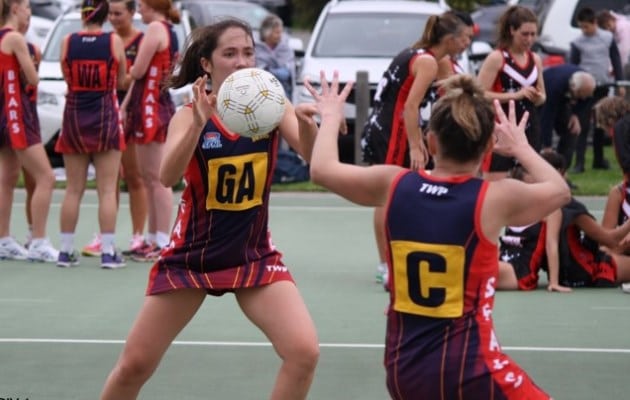 Heatherton confirmed their rating as legitimate contenders for the Division 1 title, defeating premiers Dingley in their Round 1 battle. After a cagey start in which Heatherton turned over the initial centre pass, and three minutes elapsed before the first shot was made, the Tonners steadied to take a four-point lead into the main break. As hard as Dingley pressed, they couldn’t make any impression and just as they looked as though they may be gaining a foothold, Heatherton’s shooting pair of the tall Nat Billings and the smaller, creative Bayley Mifsud kept them at arm’s length. The final score of 50-45 headed a great day for the club in which only one of their eight sides tasted defeat.

Keysborough also began their campaign in fine style against St Kilda City. They leapt out of the blocks early, taking a ten point lead to quarter time. This lead was extended to 19 points at the half, before the Saints girls really took the game up to Borough in the third term. However, they couldn’t make inroads on the scoreboard, and a 14 goal to four last stanza completed a 51-21 victory for last year’s grand finalists.

Possibly the most impressive display of the day came from Division 1 debutants Caulfield, as they led all day against regular semi finalists Bentleigh. Caulfield showed from the first pass that they would not be overawed by the jump in class from last year, and built their lead to seven points at half time. Bentleigh looked a well-organised side and moved the ball well, but as they pressed to reduce the deficit the final pass would be cut out by the excellent Caulfield defence. At the other end of the court, Caulfield’s shooters led by the imposing Sophie O’Shea did enough to maintain the lead, allowing the new girls to close out a win by 50-44.

The best match of the day came in Division 2, with Dingley coming from the clouds to swamp a previously dominant Mordialloc, which had led by 13 goals at half time. The warning signs were there in the third quarter as the deficit was reduced to seven at the last change to set up a last quarter for the ages. Dingley hit Mordialloc with everything that they had and drew level late in the term, before Mordialloc suddenly found their second wind. Three consecutive goals looked to have clinched victory for the red and whites before Dingley hit back with three of their own to again level. This time it would be Dingley that were not to be denied, converting a shot after the siren to emerge victorious by 36-35.

Another stirring battle was between Carrum Patterson Lakes  and Chelsea Heights. This was a contrast in playing styles as CPL looked strong moving the ball quickly and getting the ball to their goalers directly, while the Heighters favoured a more methodical, short passing build-up. It was Chelsea Heights that established a two-goal lead in the early skirmishes, an advantage that they maintained as the players went to oranges. The Heighters looked like they had the four points in their keeping at the final break, leading by nine goals, but the CPL ladies weren’t having that.  In the last quarter they stormed home, and took the lead late in the game, finally prevailing by 30-28.

Elsewhere in Division 2, Heatherton established an early lead against Bentleigh in the first quarter that they never relinquished. The black and whites extended their lead at every stage, and finished the match on the right side of the ledger by 61-27.  St Pauls played aggressive, attacking netball right from the jump against a St Kilda City side that, whilst as game as they come, were well beaten by a classy outfit. St Pauls won every quarter and finished triumphant to the tune of 58-21.

In Division 3, Dingley got their season off to a positive start, looking strong in defeating Keysborough by 38-21.  Mordialloc took the early initiative against Skye, and were never headed in winning 41-29. Heatherton asserted their dominance early in a 17-goal win over Black Rock. St Kilda City were comfortable in outlasting Clayton by 43-30, and Caulfield had the close one against near neighbours East Brighton. The Vampires gelled immediately in their first SFNL battle, and gave lots of cheek before succumbing to Caulfield by 31-26.

Division 4 saw Keysborough victorious in the best battle of the round, finally seeing off the challenge of Lyndale by 33-26.  South Yarra were strong against Springvale Districts, prevailing by 42-29.  Heatherton made short work of St Kilda City, scoring 48 times to their opponents’ 25, while Caulfield seemed to score at will in disposing of the Skye challenge by 59-7.  Last year’s Division 5 champions Highett showed that they will not be daunted by their promotion, pushing Dingley all the way before finishing short by 32-23.

Heatherton’s Division 5 side was made to work hard for their four points, finishing 38-32 victors over Black Rock. Mordialloc got the jump on Cheltenham and outlasted them to win 36-30, while St Kilda City did similar to Clayton by 36-26. Bentleigh rained the goals in against Oakleigh Districts, finishing 66-4 to the good, and Dingley were comfortable against Chelsea Heights, winning by 46-37.

Dingley and CPL started the Division 6 season with seven point victories against Highett and Caulfield respectively. Lyndale outclassed Hampton by 32-21, whilst Lyndhurst came into the SFNL in style with a 56-26 victory over South Yarra. Heatherton had the division’s biggest win of the day, 54-13 over St Kilda City.

Keysborough, Heatherton and Cheltenham were victorious in Division 8 against Lyndhurst, Dandenong and Doveton.

Saturday saw the first two matches in the inaugural Under 19 competition, and both saw convincing victories.  Dingley Two proved too strong for Mordialloc Two, finishing with a 59-8 victory, while Mordialloc One outclassed Skye, goaling 41 times to the Bombers' 11.