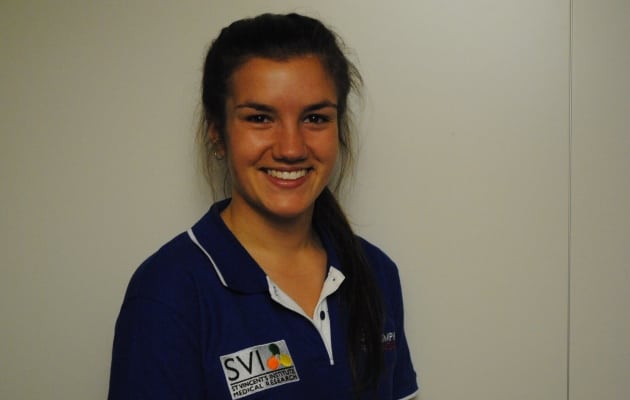 Tweet
It has certainly been a whirlwind couple of months for former SFNL umpire Annie Mirabile.

On February 3, Mirabile made history as she threw the Sherrin into the sky to commence the first ever AFLW match between Carlton and Collingwood before a full house at Ikon Park and a massive live TV audience.

Now the star whistle-blower has created even more history, becoming the first ever female appointed to the VFL Senior Field Umpire Squad. Not even trail-blazing female officiator Eleni Glouftsis can lay claim to this feat, as she instead made her way to the big time via the AFL Pathway program.

The news means Mirabile, who was last year an emergency field umpire for the TAC Cup Grand Final, is in the frame to make her VFL Senior debut early in the 2017 season, and her dream of reaching the AFL is one step closer.

Mirabile progressed her umpiring career through the ranks at the SFNL, officiating consecutive Division 1 Senior Grand Finals and took home the Golden Whistle Award in 2014 before her acceptance into the AFL Victoria system.

And there has been further good news for the SFLUA with goal umpire Nick Bridges also promoted from the VFL Development Squad to join Mirabile on the Senior List. In addition, Matt Mahoney, Cam Watts (both field umpires), Joel Davis (boundary) and Tayla Manning (goal) have all joined a host of former star SFNL umpires on VFL Development list after training with the AFL Victoria squad for the entire preseason.

The news is a further boost for the SFNL Umpiring Pathway, headed by Director of Umpiring Peter Marshall.

Marshall was full of praise for Mirabile, noting that she is a wonderful role model for any young, up-and-coming umpires looking to forge a career at a higher level.

“It’s all on her merits. She only spent one year on the (VFL) Development list, and sat on the bench for the TAC Cup Grand Final, and now she will be exposed to VFL Senior football this season,” Marshall said.

“Nothing’s gifted, she’s  not getting gifted (anything), she’s worked hard. You’ve gotta make some sacrifices. The sky’s the limit if you are prepared to work hard… and I’m sure we will hear and see a lot more of Annie as she progresses through.”

Through Marshall and his umpire coaching team, several current and former SFNL umpires now find themselves on VFL lists or talent development programs that will help fast-track their career progression. As a result, the SFNL pathway is genuine option for ex-players and aspiring whistle-blowers to reach the elite level across all three umpiring disciplines – field, boundary and goal.

“Umpiring has become a lot more attractive over the last five years than ever before and we still encourage ex-footballers to take up the whistle and have a crack,” Marshall said.

“One example that springs to mind is Leigh Fisher, who retired from AFL football in 2011 and spent half a season umpiring in the Southern Footy League and has now umpired 76 games of AFL football.

“(You could) umpire at 9:30 at Skye on a Saturday morning, and in two years’ time you could be out umpiring on the MCG, just like (SFNL field umpire) Luke Porter did last weekend, when he umpired a curtain-raiser on the MCG.

“It’s a viable career, there’s no question about that, and the women’s league is just opening up even more opportunities.”


FOR MORE INFORMATION ON UMPIRING IN THE SFNL, OR TO REGISTER AS AN UMPIRE CLICK HERE.