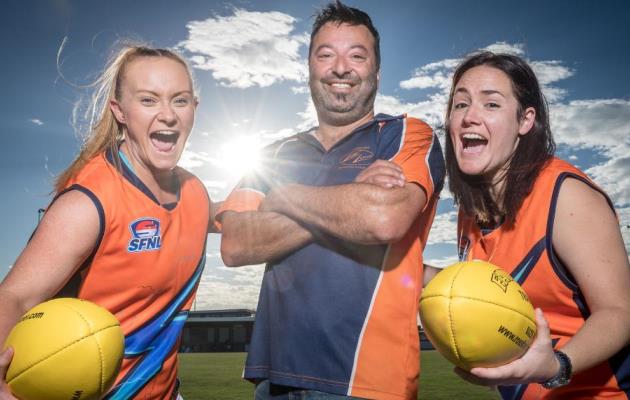 Tweet
The Herald Sun and Foxtel is kicking off their ‘Full-On Footy Tour’ today, with an SFNL club chosen to launch the state-wide tour.

The Lyndhurst Football Netball Club are the first of seven Victorian community football and netball clubs that are set to feature in a celebration of local football over the next three weeks.

And a big day and night is planned down at Marriott Waters Reserve, with a BBQ and free footy activities, including handball targets and inflatable specky games, will be set up for the youngsters between 3:00pm and 6:00pm.

Today’s Herald Sun features a brilliant story on the Lyndhurst Football Netball Club, as well as a photo of female footballer Kelly Baker on the front page.

Iliadis has been instrumental in establishing a new childcare service in the club rooms this year, which will allow parents, and particularly mothers of young children to train and play at the club. In addition, he manages 120 Auskickers, 11 junior football and three senior football teams each week.

However, despite his lengthy list of achievements, Iliadis was quick to shift the credit back onto the club.

“We all do these things because we like it. That’s the common spiel, isn’t it? ‘Yeah, nah, it’s not me mate, it’s everybody else!’” Iliadis said with a chuckle.

“But look, I don’t mind. It’s all about the club ultimately and getting our word out there.”

“We’ve been (about) branding for a long time and I think we do things a little bit differently from other clubs, so we try diversifying and helping out people in different ways.”