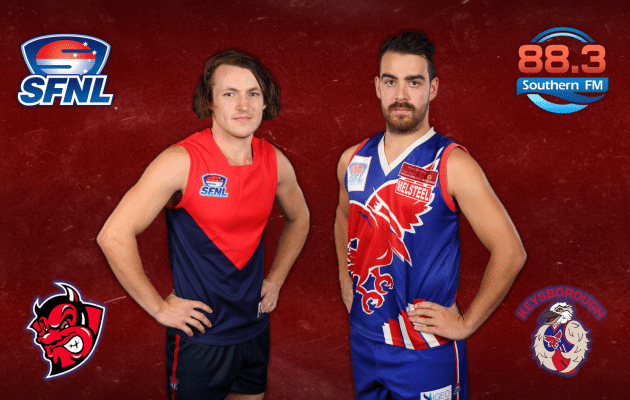 Love the Game Round Preview While the top three sides have now put a bit of a gap on the rest of the competition, the race for the remaining finals spots remains as fierce as ever.

This importance of this match in the context of the season cannot be overstated.

Both the Demons and the Rosellas, though still in finals contention, are precariously positioned at 4-6 and need a lot of things to go right for them to secure a berth in the finals. A loss here for either side would be a monumental setback.

The eighth-placed Bentleigh’s past month has been as good as anybody’s, and although beaten last week by the high-flying St Pauls, were no less impressive in the way they went about their footy.

Cheltenham, meanwhile, went from chocolates to boiled lollies in the space in the space of an hour, and their second-half capitulation against the Dingoes is a worrying sign for a team that has been notoriously hot and cold this year.

A full four-quarter performance from the Rosellas this week and they are a chance to sneak over the line, but the Demons’ form at the minute is simply irresistible.

The Colts’ first season in the SFNL’s top flight hasn’t exactly followed the script, and with the losses mounting, finals are looking further and further away.

This week they face the toughest assignment in Mordialloc, who have been irrepressible since Daniel Quinn took over as coach ahead of Round 9.

The Bloods will enter this clash as near unbackable favourites, and although they wouldn’t be the first top side to come a cropper on the Colts’ diminutive fortress, their array of big-bodied ball winners should have too much class and experience in the clinches to let this game slip.

It was a welcome return to form for the Districts last week, albeit against a depleted Clayton outfit. Nevertheless, their colossal win should fill Shayne Sheedy’s charges with plenty of confidence heading into this week’s clash with the Dogs.

St Pauls sit second behind Mordialloc on percentage only, and will take some beating come September. The club has a treasure trove of highly talented Under 19 kids at its disposal, many of whom have been blooded into the senior team throughout the season, meaning the Dogs not only have the depth of talent to go well into September, but also contend for several years to come.

Oakleigh will provide a contest, but as long as the young pups don’t get ahead of themselves, St Pauls should chalk up win number nine.

St Kilda City will have its eyes firmly set on Dingley’s spot in the top three when these two sides go head to head at the Den.

And the Dingoes will be keen to put in an inspired performance for veteran defender Andrew Frost, who this week runs out for his 200th game.

The fourth-placed Saints upset Dingley in their most recent encounter back in Round 2, but if they are to repeat the result here they will need to put some work into nullifying in-form spearhead Calhan McQueen. ‘The Dream’ has averaged nearly five goals a game since Round 5, and has set up many others for his teammates, enhancing his reputation as one of the most dangerous forwards in the competition.

Remarkably, the Saints have maintained a record of alternating losses and wins since Round 5, and Dingley will ensure that pattern continues.

The Panthers looked at times listless against Mordialloc last week as they slumped to their third loss in four games. Their depth is being severely tested at the moment, but at its best East Malvern remains capable of matching it with the best in the competition.

Clayton has endured a torrid year, and struggled for competitiveness in most of its matches. Unfortunately, another heavy defeat awaits them at the Zoo this week.

LOVE THE GAME ROUND 13 PREVIEW

Several enticing matchups are on the docket for Round 13 of Division 2, with a battle between the best teams in the comp the clear highlight.

The clear game of the round and this should be a rip snorter of a match – make sure to tune in to the excellent coverage of the SFNL radio team, who will be at Beazley Reserve.

The Heighters are coming off their first loss of the season, and would be striving not to make it two in a row, making this game all the more interesting.

Keysborough has been in terrific form and are legitimate premiership contenders with several playmakers across the ground.

Another interesting game as the Vampires attempt to play their way back into form after dropping out of the top five.

East Brighton went down to Skye last week and have lost two in a row against top five contenders, making this a must win clash.

Caulfield will be fresh after enjoying the bye, but will it affect its form the way it did with Chelsea Heights last week?

The Lions take on the Bombers as the former attempts to keep their good form going after breaking a three-match losing streak.

Mount Waverley defeated Hampton in convincing fashion on the road last week and will look to make it two upset wins in a row.

It will be a tough challenge however, as Skye is in pretty good form itself, having also won in convincing fashion against East Brighton.

The window for jumping off the bottom of the ladder is closing fast for Heatherton as it takes on Hampton at home this week.

The Tonners sit two games behind Highett in 10th spot and only having eight rounds, including this one, to make up the positioning.

The Hammers squandered a chance to solidify its hold on fifth against the Lions, but will have a chance at redemption with Murrumbeena having the bye.

This is a must win game for both clubs, with progress towards a potential finals spot on the line for both heading into the clash.

While a loss for Springvale won’t leave it out of contention for fifth, a loss for Highett might, so expect this clash to have finals like intensity.

LOVE THE GAME ROUND 12 PREVIEW

When Sandown visited Lyndale in Round 1, the Pumas were not hospitable hosts.

They vanquished the Cobras by 163 points, with Trevor Kumetaitis booting eight goals.

Expect a better showing by Sandown at home, although a win is out of the question.

The Redlegs are playing at home this week and come up against a congregation of Magpies that has tasted defeat in its last couple of outings.

In the Round 1 clash between these sides, Ashwood’s Mitch Saunders was best afield and booted seven goals.

He and several other key Ashwood players will be missing this time, but the Redlegs lack the depth to exploit the situation.

Black Rock started its season brightly with a 35-point win over Moorabbin at Widdop Crescent.

The Jets looked every bit a finals contender, but then fell into an unexpected four-match losing streak.

However, since Round 6 Black Rock has bounced back, raising hopes of finals action.

Moorabbin brings the confidence of a win last round, but it came against the bottom side.

The Kangaroos have been largely uncompetitive against strong teams, with the one exception being a win over South Yarra.

This is an exciting clash between two premiership contenders.

South Yarra will be bitterly disappointed with its display against Hallam last round.

By contrast, Doveton comes into its clash with the Yarras invigorated by a commanding win over Ashwood.

Only percentage separates these sides on the ladder, with the Eagles third and the Yarras next.

South Yarra won their Round 1 clash with the Eagles by eight points.

Doveton is a strong chance to square the 2017 ledger with a narrow victory.

It appears a comfortable assignment for likely finalist Endeavour Hills when it visits tenth-placed CPL.

When the teams met at the Falcons’ nest, Endeavour Hills prevailed by 27 points.

Anticipate another Endeavour Hills’ victory, but the improving Lions can push the Falcons at Roy Dore Reserve.

This match begins at 5pm and finishes under lights.

Spectators will need to rug up as temperatures may well plummet close to zero by the end of this encounter.

Hallam commenced its season with a 44-point triumph over Lyndhurst.

Lightning continues to show glimpses of its potential and is sure to be a force within the next couple of years.

But it meets a club that is now a hot flag favourite.

The Hawks will win by a similar margin to last time.

St Pauls and Skye will both be looking to respond after defeats in Round 10, as they take on Hallam and Cheltenham respectively.

In two games that promise to excite, top-two placed sides St Kilda City and Oakleigh District will go head on at Princes Highway Reserve, and Doveton could have their best opportunity yet to secure their first win of the season, as they face Bentleigh at home.

Both Endeavour Hills and Hampton will seek to restore some pride after recent disappointing losses as they meet at Barry Simon Reserve, and Dingley will host Parkmore / Springvale Districts at Souter Oval.