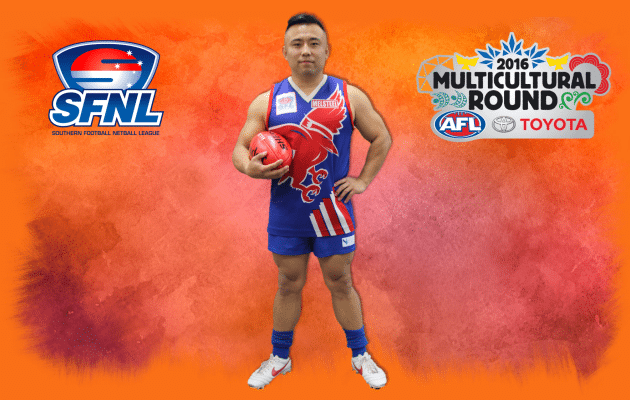 For the last 22 years Jamie Pi’s life has revolved around football.

His lengthy playing career has had many highlights, and he has over the last decade branched out into other aspects of the game, including coaching, administration and broadcasting, as well as closely working with the AFL to spread the game into the many multicultural communities in Melbourne.

But his formative years were spent in his country of birth, China, and had no knowledge of AFL until his early teens. However, it didn’t take him long to fall in love with the game.

Pi migrated to Australia as a 13-year-old with his parents in 1993. His father, a chef by profession, was invited over to Australia as a skilled migrant from Urumqi, the capital city of the Xinjiang province in China’s north west.

Pi says his family’s circumstance was different to many that emigrate to Australia, but it nevertheless had its challenges.

“It took a lot of courage, obviously, (we didn’t) speak English,” Pi revealed.

“(My dad) went from a really cushy job as a head chef at a national hotel, to landing in Dandenong South. It was a fairly big drop in standards for us.

“Unlike a lot of refugees who had it tough back home, we actually had it quite cushy back home so it was a fairly big drop for my parents, having to work weekends.”

Upon arrival to Melbourne, Pi attended the Noble Park Language Centre to learn the English language, but after just three terms there, he was deemed competent enough in his English communication skills to join mainstream schooling.

He was then transferred into Year 7 classes at Dandenong High School and it was there he met a number of new friends who first introduced him to AFL.

“One of my best mates I met there, and he had a yellow footy that he always brought to school and he’d have a kick in the yard at lunch time,” Pi said.

“And then in Year 8, which is 12 months after I came to the country, I found myself with nothing to do on a Saturday or a Sunday, having parents working. Basically just left alone.

“One of my school mates said ‘you should join the footy club since you like it so much’. So I joined St Gerard’s Football Club in the Dandenong Districts Junior Football League.”

And Pi has very fond memories of his first season in junior footy, although he admits it took him a while to grasp the finer points of Australia’s national sporting code.

“Played Under 14s at St Gerard’s in 1994, and I remember the first training session at Dandenong Showgrounds where Dandenong West, now Dandenong (Redlegs) play. That was my junior ground,” Pi recalled.

“(I) remember playing there, training there and having absolutely no idea what was going on. Drills? No idea, no clue.

“The 1994 season was my first season and we went into a Grand Final. I was the last kid picked for the Grand Final, but we won the flag in 1994, that was my first ever football season with a flag in juniors.”

Pi has played footy every year since, and his journey in footy has been nothing short of remarkable.

He progressed through the age groups at St Gerard’s before joining Keysborough in 1998 after his parents moved to the area. He began in the Burra’s Under 19 side with a few of his St Gerard’s teammates before commencing his senior footy career.

A footy nomad in many respects, Pi has represented several clubs both in the SFNL and abroad over the journey, including the VAFA-affiliated St Johns and Oakleigh and Hawthorn Amateurs.

He represented East Brighton in a handful of reserves matches before traveling to Germany in 2003, where he competed in organised Aussie Rules competitions.

Pi described his two years in Germany as “one of the best football/travel experiences you’re ever going to get”.

In 2007, Pi began his association with the SFNL as the inaugural senior captain of the now-defunct club Southern Dragons, which was a multicultural team comprising players largely of Asian backgrounds.

Pi then transferred back to his original senior club Keysborough in 2015, where his kids had started in the club’s Auskick program.

He even had the honour of representing China at three consecutive AFL International Cups in 2008, 2011 and 2014.

At the last International Cup, Pi combined his playing duties with a coaching role, and his first experience as a coach helped developed his love for the caper and fuelled his coaching ambitions.

“Having been one of the few that actually lives in Australia and plays footy in Australia out of that team, I think it was important for me to teach the boys and pass on as much information as I can to the boys,” Pi said.

“That’s why I really enjoy coaching and laid the foundations of trying to become a coach.”

The following year he accepted the job as coach of Keysborough’s Thirds team, and his first season at the helm was a success, reaching the Grand Final and running raging favourites Skye to just 16 points after a thrilling battle.

Pi is this year undertaking a multicultural coaching internship with St Kilda Football Club as part of a new pilot program introduced by the AFL Coaches Association that gives people from multicultural backgrounds the chance to learn more about coaching from within an elite environment.

This is program is part of the AFL’s overall push to encourage more people from non-tradition footy backgrounds to take up coaching and administrative roles within community clubs which, by extension, will ultimately pave the way for more multicultural inclusion in those roles at the elite level.

Pi is no stranger to AFL House, having been involved with the sport’s governing body or it’s clubs in some capacity since 2006.

But perhaps his most notable involvement in the game has been his calling of AFL matches in Mandarin, which he has done for a number of years.

Pi explains that that he first got his foot in the door through his association with the Melbourne Demons, as well as a chance meeting with one of the world’s most powerful leaders.

“In 2010, the Melbourne Football Club, who I’d been working with for a few years by then, had initiated (the idea of) playing a game in China as the first exhibition game (there), and that coincided with a visit from the then-Chinese vice President (Xi Jinping), who is now the Chinese president,” Pi said.

“He came to Carlton (versus) Fremantle, which was a game at Etihad and they needed someone to explain the game to the big man.

“So I was lucky enough to be chosen to explain it to him, which was a massive thrill because (I got) up close and personal with one of the most powerful people in the world.”

As a result of Xi Jinping’s visit, Melbourne and the Brisbane Lions committed to play the very first exhibition match in China, which was held at Shanghai’s Jiangwan Stadium in October that year.

The AFL decided to broadcast this match in Mandarin in an attempt to spruik Australia’s indigenous game to the large Chinese market. Due to his association with the AFL and the Melbourne Demons, as well as his fluency in the local language, Pi was asked to commentate the match, his first experience in Mandarin football commentary.

It wasn’t long before Pi’s talents were noticed, and has since provided Mandarin commentary for a few Port Adelaide matches as they try to crack into the lucrative Chinese market, as well as for the AFL during their Multicultural Round celebrations.

And this week Pi will be at the Adelaide Oval to commentate the Thursday night clash between the Power and the Hawks, before flying to Perth to call Sunday’s match between West Coast and North Melbourne at Domain Stadium.

His Mandarin commentary is something he loves, although Pi calls games differently to the way most English commentators do.

“It’s not very difficult to call in Mandarin, it’s just a few words, a few things I can’t translate directly, which makes it a little bit difficult,” Pi explained.

“Most of the calling is about educating the listeners what is happening, rather than calling the action because they are not from a footy background, they don’t understand the rules.

“I get a lot of joy out of it because you are bringing something you love and are passionate about to a new audience.”

Pi has also been an AFL Community Ambassador for a number of years, and is heavily involved in spreading the gospel of Australian football to people of diverse backgrounds and in particular the Asian community.

Pi says he was one of the only players of Asian descent when he first started his career, and has seen a great shift in attitudes towards multicultural players. For this reason, he is a big supporter of the Multicultural Round concept at all levels to celebrate the diverse array of cultures within our game and encourage more people from multicultural backgrounds to embrace the game.

“I think a lot has changed on and off the field. From playing against opposition and seeing a lot of people from diverse backgrounds on the field, there’s absolutely a shift from the old days when you were looked at differently when you ran out,” Pi said

“Now you’re just one of the players… one of blokes you need to tackle, need to shut down or need to play on, it’s fantastic.

“I urge all footy clubs to take this opportunity to celebrate those that are from diverse backgrounds… and say ‘look, we want more of you guys to get involved.’ This is the only way to push the league forward, and push our sport forward.”