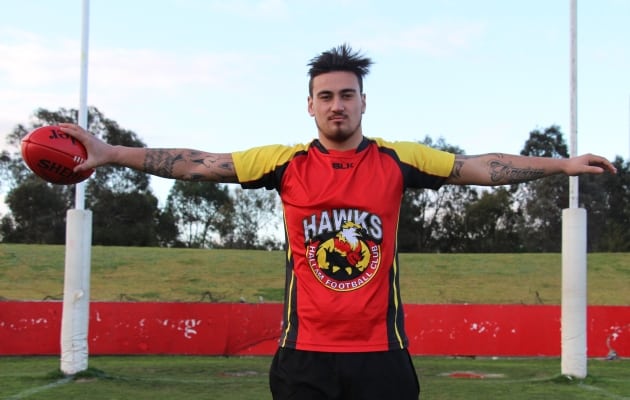 Tweet
In celebration of this weekend's Multicultural Round, SFNL journalist Andrew Paloczi caught up with Hallam's Travis Walker to discuss footy, his Maori heritage and the significance of his elaborate tattoos. Warm, friendly and generous with his time, Travis Walker is keen to chat. He talks enthusiastically about his adopted sport of Aussie Rules and his club Hallam, but he also speaks with passion about his Maori culture and what it means to him.

“It’s good to tell people what I’m about and where I come from,” says Walker. He has elaborate tattoos on his arms and body, but these are not a mass of colour in the style of many footballers. Walker’s tattoos have a deep meaning to him and represent his family, and are known as ta moko. He points out which sections of the design are linked to which family members. Traditionally, ta moko is carved into the skin using bone.

Walker’s great great grandfather was a Maori chief and was involved in the Treaty of Waitangi, a written agreement signed in 1840 between the British Crown and a number of Maori chiefs. The name of the treaty is derived from the place in the Bay of Islands where it was first signed, and the treaty is seen as New Zealand’s founding document. There have been disputes over the treaty and its exact meaning and some controversy has stemmed from differences in how the English and Maori versions can be interpreted, but it is still an active document.

On February 6th, the day the treaty was signed, there is an annual public holiday in New Zealand known as Waitangi Day, a day Walker views as highly significant.

Walker’s family has a house in the Bay of Islands, and he describes gathering there for family feasts cooked underground in the traditional Maori way, known as hangi. Freshly caught seafood and pure New Zealand water feature at these gatherings.

Family ties are strong in the Maori culture and Walker explains that family always sticks together no matter what the circumstances, and are always there to help.

But it is not only family who make Walker feel welcome. Speaking of playing for Hallam he says, “It’s really good here, the environment. The guys here are awesome, a good bunch of blokes.” Walker takes a gentle ribbing from some of his teammates before and after our chat, but you can tell it is all in fun.

He explains that he is still learning about the game that he started to play in 2008, the year after arriving in Australia. Coming from a Rugby League background he was not initially convinced Aussie Rules would be a game he would enjoy, but decided to give it a go and was pleasantly surprised.

Initially, Walker played footy for Narre Warren Under 16s. He then spent some time in Under 19s in the EFL, before making his move to the SFNL, playing at Dingley in the reserves and the thirds. He is now enjoying his time at Hallam in the senior team. His role in the side varies, playing mostly at centre half back, but also spending time in the forward line and the ruck.

On this day, Walker covers plenty of ground as his Hawks take on the might of Black Rock. Despite the valiant efforts of Walker and his teammates the Jets prevail. Although the Hawks have few wins this season, the young side is showing encouraging signs for the future.

For all the passion in Aussie Rules we lack anything equivalent to the Maori haka, despite attempts by some to link the goal celebrations of individual players to this New Zealand tradition. There is something thrilling about seeing a New Zealand team facing its opponents before the game and performing the haka. “Everyone loves it, everyone loves to see it. Everyone should get involved in it. I think it’s something that will touch everyone,” Walker says.

Walker speaks with pride about the many different Maori tribes in New Zealand, and about their language, which is incorporated into the national anthem.

He would love to learn more about Australia’s Aborigines and is fascinated by the different aboriginal groups and by the didgeridoo. Perhaps everyone learning more about other cultures would help prevent misunderstandings that continue to exist. The Adam Goodes’ situation suggests that greater understanding is needed.

Walker describes why he is keen to be involved in an article for Multicultural Round. “It’s just so good how I could be onboard with this. My message to everyone is it’s not just a sport for Australians. I love it when different types of cultures come in and they play a sport and they try it out. It’s a game that everyone can enjoy.”