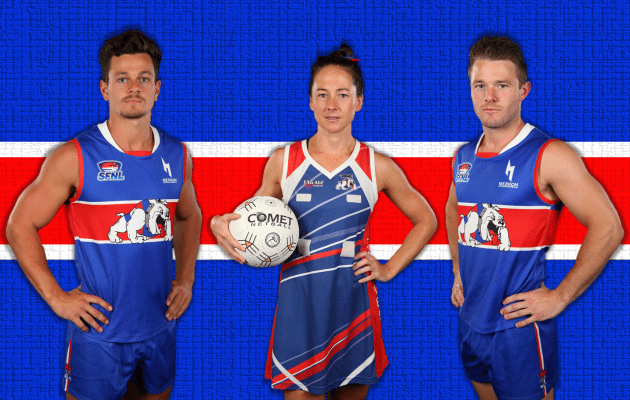 Excitement at the Kennel After Off-Season Changes

Both form and injuries were contributing factors in the Doggies' tumble down the ladder, a fall that saw the club miss the finals for the first time since 2005.

But despite a seventh-place finish, the addition of several recruits has seen optimism and positivity restored at the Kennel.

And headlining the list of fresh faces is Jason Heffernan, who has replaced the outgoing Richard Houston as the club’s senior coach.

This is Heffernan’s first senior coaching role, but he brings with him a wealth of experience in high performance environments at TAC Cup and VFL levels. Most recently, he served as an assistant coach last year at Port Melbourne under the legendary Gary Ayres.

And the man tasked with leading the club through its transitional phase says he is excited by the challenge ahead.

“Really happy to be on board (at St Pauls). It’s exciting and I’m really looking forward to it,” Heffernan said.

“It’s a good vibe. The boys are excited, (we’ve got) a couple of new recruits and it’s all good.”

The club’s recruiting strategy has been a bit different to previous seasons, and have distanced themselves from the temptation of opening up the purse in pursuit of big-name guns for short-term success.

“We have (recruited), but it’s been a little bit strategic from the footy club itself in that they did feel that injuries contributed to maybe not making the finals, not so much a lack of players,” Heffernan explained.

“So for us it was more about getting guys that had left the footy club to play in other leagues or for other teams, to get them back. Some young, talented boys that were St Pauls locals, get them back and maybe one or two big bodied recruits, which we’ve done.”

As part of their recruitment campaign, the Dogs have been able to lure talented former star Matt Kreymborg back to the Kennel after a stint at Fish Creek in the Alberton league. The hard-bodied midfielder, who has played VFL football with Sandringham, will form a key part in St Pauls’ revival.

The club has also overhauled its fitness regime to a more professional approach that closely resembles the VFL or TAC Cup programs that Heffernan has been involved in. The club’s depth was severely tested last year after a cavalcade of players were consigned to the casualty ward, so it is hoped this new fitness and conditioning program will help the Dogs keep its stars on the park in 2017.

Despite all the buzz that has surrounded the club during its positive preseason, Heffernan is under no illusions that his quest to return the Dogs to the Division 1 summit will be difficult in the short term. As such, he has shied away from making bold predictions about his team in 2017.

“With the Colts coming up, and Dingley being strong, East Malvern recruiting well, it’s going to be tough,” Heffernan conceded.

“We’re coming from 7th, so for me, my expectation is that if we can see the guys have improved from the start of the preseason to Round 1, we’re hoping they’d be super competitive.

“The more competitive we are, the longer we’ll be in games and the more games we might win.”

MEANWHILE, the club’s netballers have put their 2016 grand final disappointment behind them and are gearing up for another big year following several positive off-season changes.

The Doggies were narrowly beaten by Heatherton in a nail-biting Division 2 premiership decider, but have recently accepted a promotion into the SFNL’s top grade competition.

Captain Meghann Geschke says the club has retained almost all of its playing list from last year, and is confident of success in 2017.

“We had Ann (Cooper) injure herself midway through last season, but she is almost back.

St Pauls has been further strengthened by the inclusion of Mark Bormanis, who will take the reins as the club’s first netball coach and add further professionalism to their netball program. In addition, St Pauls will field a second netball team, which will likely compete in Division 4.