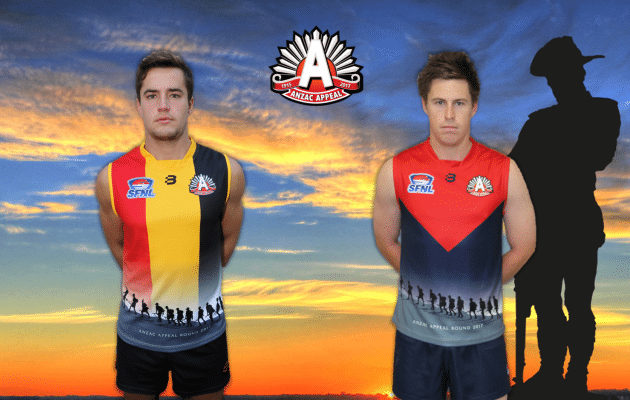 Tune in to 88.3 Southern FM from 2:00pm to hear the live call of these game, or stream the commentary on your mobile via sfnllive.com.au.

Both Cheltenham and Bentleigh will wear specially designed commemorative ANZAC Appeal jumpers for their annual ANZAC Round clash, and you can expect another large contingent on hand at JBO to witness an enthralling contest.

Bentleigh did just enough to take the points against St Pauls a fortnight ago, albeit in tough conditions, but perhaps have a bit of work to do to recapture their sparkling 2016 form.

The Rosellas, meanwhile, looked impressive at times against the reigning premiers, and with its new recruits stealing the show, they justified their billing the league’s biggest improvers.

This is a game that could genuinely go either way, but with a few injury concerns at Arthur Street, I’m tipping the home side in a thriller.

Mordialloc provided the biggest boilover last week, stunning the premiership facies with its ferocity at the contest and explosiveness on the outside.

The Colts, meanwhile, were challenged like they haven’t been for some time, and pulled off one of the gutsiest wins in recent memory. Confidence can take a side a long way, and that victory over St Kilda City could perhaps be season-defining for the Division 1 newcomers.

This will be a terrific battle between two hard-bodied midfield groups, but the vast expanses of Ben Kavanagh will play into the hands of the home side.

It has been tipped to be a tough year at the Kennel as St Pauls looks to rebuild its list. But the impressive performance of returning star Matty Kreymborg, who almost single-handedly dragged his side back into the contest against last year’s grand finalist, suggests it won’t be all doom and gloom.

The Oaks looked impressive as they secured a massive Round 1 victory over Clayton with ease. The Dogs will no doubt provide a sterner challenge this week, but the all-round quality of this Oakleigh side will see them home.

There’s a lot to like about these new City recruits after impressive first up performances. And you can bet a side stacked with new players will improve as the year progresses and the players gel together under new coach Richard Houston.

Dingley, however, showed they’ve still got it, responding to the Cheltenham challenge to secure their first win of the year. While they perhaps won’t be as dominant as they have been in previous season, the Dingoes remain firmly in premiership calculations and shouldn’t drop this one.

The standalone Sunday clash between traditional ANZAC Day combatants is shaping as one of the most lopsided in recent seasons.

The concerns about Clayton were confirmed in Round 1, with a demoralising loss to local rivals Oakleigh Districts.

East Malvern hardly set the world on fire themselves, but you can expect improvement from them in the coming weeks. If they can play to their potential, it will be a miserable day for Clayton.

The season resumes for Round 3 after the Easter break with three sides still searching for their first win of the season.


JB’s Match of the Round

Match of the round for me sees last year’s Division 1 wooden spooners take on last year’s division three premiers in an intriguing matchup.

East Brighton has looked the better of the two sides however, and should be able to score win number one.

Chelsea Heights look to win its third match in a row when it hosts Springvale Districts at home, a match it will go into as favourites.

The Districts were impressive in their grinding victory against Highett before Easter, but will have a much tougher task against the Heighters on their home deck, especially with Phil Smith in good form for the home side.

Murrumbeena come off the bye looking for its first win of the year, but come up against premiership favourite Caulfield in what will be a tough clash.

The Bears had the wood over the Beena last year, but will need a strong performance to get across the line after an ugly win against East Brighton.

Murrumbeena always played well on its home deck, but Caulfield should be too strong.

The Tonners host the Bombers in what will be a tough match for them at home, with Skye soaring high after two impressive victories to start the season.

While Heatherton has continued to improve, it will have its works cut out for it with Skye recruit Stephen Hawkins in excellent early season form.

The Dogs take on the Hammers in an important clash for Highett heading into Round 3.

While a loss won’t end their season by any stretch, for a team which was looking to play finals football in 2017, going 0-3 to start the year leaves them with a lot of work to do.

Hampton will be full on confidence after two straight victories, and rightly so as they look like on of the most improved teams of the competition so far.

Doveton Eagles and Lyndhurst entered the season with high expectations, but were unable to make winning starts in Round 1.

Expect Lyndhurst’s youngsters to bounce back.

However, Doveton players will feel confident after taking it right up to South Yarra in a tough away assignment.

Anticipate a competitive match, but the experience of Doveton will prove the difference.

New Sandown coach Ange Sammartino will be keen to see his Cobras produce a competitive showing against Moorabbin.

Sandown was embarrassed in Round 1, whilst Moorabbin showed promise despite a loss.

Kangaroos’ recruits Justin Isaac and Damian Armansin both impressed with their hard work to win the footy and will be difficult for the Cobras to contain.

Moorabbin will be far too good.

The one positive for Dandenong is playing at home, but that will not be enough to trouble South Yarra.

The Lions got off to a gritty start with a tough first-up win.

Unfortunately for the Redlegs, their Round 1 story was like a continuation of last season’s nightmare.

A win appears out of the question for Dandenong, but it needs to show competitive spirit.

This match presents Endeavour Hills with a chance to test itself against Hallam on the Hawks’ home turf.

The Falcons are a finals contender, and the Hawks appear to be the division’s benchmark side.

Hallam will win an entertaining avian stoush by a few goals.

This promises to be a ripper of a contest between two of the division’s best sides.

Black Rock showed a propensity to run hard and combined effectively as a team in its first match back in Division 3.

Ashwood will relish this challenge.

It is a difficult one to call, but being on their home turf may give the Jets the edge.

Carrum Patterson Lakes will strive to continue its promising start to the season when it hosts Lyndale.

Whilst CPL couldn’t win in Round 1, it was competitive.

This is something new coach Terry Philippe has worked hard to instil in his players after the club endured a horror 2016 season.

Lyndale will win, but Lions’ fans should enjoy seeing Philippe’s recruits in action, as the club builds a rosier future.

After the Easter break, the Under 19s will return for Round 2 on Saturday April 22nd. St Kilda City will host Dingley at home, and Doveton will be introduced to the season against Hampton after their first-round bye.

St Pauls and Oakleigh District will go head on after two wins in the first round, and Parkmore/Springvale Districts will be hungry for a win against Skye, after just falling short in their first game.

Endeavour Hills will be looking to continue their first round form against Hallam, and Bentleigh and Cheltenham will both be looking for their first win of the season.

CPL/Keysborough will have a two-week resting period, due to a fixtured bye after the Easter break.