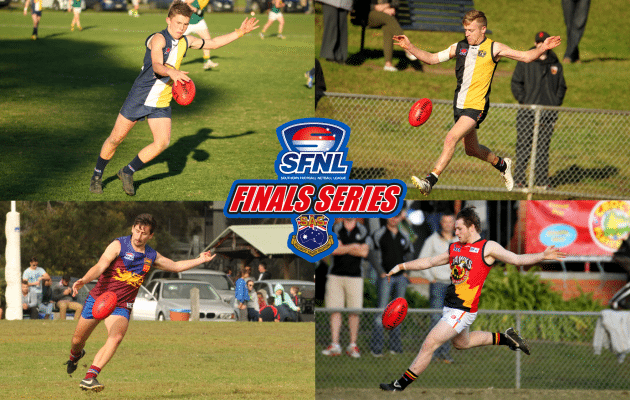 SFNL Round Previews are proudly brought to you by Beiersdorf/Elastoplast.

It is just three weeks since Doveton comfortably claimed the points when it visited Ashwood’s turf.

The teams clash for the chance to take on Mount Waverley for a place in the Grand Final.

Ashwood won’t be too concerned about its recent eight-goal loss to this week’s opponent.

The Magpies have regained the services of forward Dale Carroll who missed that clash. Four goals in Round 18 took his season tally to 57.

It requires a strong team performance from Ashwood for it to upset the Eagles.

Matt Maginnes has had a productive season for the Magpies and will be needed to clear the ball from half back.

Mitch Saunders’ drive through the midfield is sure to be important for the Magpies. He has played 16 matches this season and been named his side’s best in a quarter of those.

Skipper Paul Wineberg was greatly missed by Ashwood in last year’s finals after he succumbed to injury. is presence this time will be a major boost to his teammates.

Doveton has had its share of injury problems through the season and has had to find alternate goal scoring options.

Peter Dye was a major contributor early, before being hobbled by injury.

The Eagles are sufficiently talented through the midfield to create plenty of opportunities for their forwards.

In his first season of senior football, Ricky Johnson has twice been named as Doveton’s best player.

His pace and ability to read the play may prove important in the finals if he is able to handle the pressure of the occasion.

Expect an entertaining final with Doveton to win.

Looking forward to his first season in charge at Hallam, coach Scott Slater was confident the club’s recruiting would achieve stronger onfield results. But he stressed the need to build long-term sustainability and give opportunities to young players.

Many of Hallam’s Under 19s have played senior footy this season.

Slater has proved correct about the Hawks’ ability to improve significantly on its tenth-placed finish in 2015.

His players have probably surpassed his short-term expectations by winning 12 home and away games.

The Hawks’ Elimination Final opponent, South Yarra, has plenty to be proud of too. The Lions narrowly edged out Hallam on percentage, claiming fourth spot on the ladder.

After being relegated at the end of the 2013 season, South Yarra has made steady progress. It finished 2014 with five wins and built on that, managing eight last season.

Much of the Lions’ success has been achieved through disciplined defence and having a good spread of goal kickers, rather than relying on a dominant forward.

The small size of South Yarra’s home ground has contributed to the side’s defensive capabilities as it allows the Lions to get plenty of tackling practice. Their ability to apply fierce pressure means they have a game that can deliver in finals.

But Hallam will not be easy to hold with Manny Peresso’s ability to get plenty of the footy and create opportunities for teammates with precise passing.

One teammate likely to benefit is forward Shane Thomas, who has booted 36 goals this season.

Brady is the highest-placed Lion on the goal-kicking table with 37 for the season, with the next most productive being Merchant with 28.

Hallam and South Yarra each won one of their head to head home and away clashes, with the Lions triumphing by a surprising 71 points in Round 15.

The Lions are likely to win again on Sunday, but the match will be a tighter contest and a worthy final.

With only the top two positions on the Division 1 ladder locked away, the fight is on in earnest in the last round of the home and away season as four clubs look to secure one of the three remaining finals spots.

After looking like sure things for the double chance a month ago, the Bloods’ finals chances are now on seriously shaky ground after two ordinary losses in the last fortnight.

The equation for the third-placed Mordialloc is simple – win and they cement a finals berth and finish as high as third on percentage. A loss, meanwhile, puts it at the mercy of other Round 18 results, with September exclusion a certainty if the favourites in Oakleigh District, Clayton and East Malvern salute.

It will not be an easy task, as they face the in-form Demons, a side that has underlined its flag credentials in recent weeks.

Unfortunately for Mordialloc, Bentleigh will have too much firepower across the ground and will enter the finals on a four-game winning streak.

A huge game between two sides in red-hot form. The last clash between them went down to the wire, and all indicators are this may as well.

The Rosellas have had a brilliant second half of the year, and although out of the finals race, they can nevertheless shape the composition of the top five by knocking the Clays of the finals with victory here.

A win for Clayton will see their season extend post this week, and with a distinct home ground advantage, expect them to claim the spoils in this one.

The end cannot come quick enough for St Kilda City, who will finish second last regardless of Saturday’s result.

Meanwhile, the Panthers have spectacularly fallen from grace, and find themselves out of the five after one win and a draw from its last seven matches.

If East Malvern win, they will make the finals if one of the three sides above it loses. And despite their length casualty ward, you’d think they would still be too good for the similarly depleted Saints.

A five-match winning streak, which includes victories against the competition’s top three sides, has seen last year’s Div 2 premier roar back into finals calculations. And a sixth win this week against a youthful St Pauls outfit will see them secure a top five berth.

St Pauls clearly have their eye on next year, and have been getting senior games into many of its kids which will put them in good stead for 2017 and beyond. But unfortunately they lack the class and experience to stop the rampaging Districts.

There isn’t much to look forward to here as the minor premiers take on the winless wooden spooners.

East Brighton’s youngsters have certainly improved throughout the year and have been more competitive in recent weeks, but won’t get anywhere near the mighty Dingoes.

The final round of the Division 2 home and away season is upon us and with three teams having the bye – including third-placed Caulfield – the fights for spots 3-5 continues to be intriguing.

Keep an eye on the winning margin of this game ladies and gentleman because the Bombers need a big win to overcome Caulfield and jump into third spot on the ladder, securing a double chance in the process. The Districts have proven at times this season they’re not a pushover with last week’s victory against Murrumbeena a prime example of how good they can be on their day. With a double chance on the line I expect Skye to win but can they win by enough to push them into third.

This is one of those unfortunate final round matches where the two sides have nothing to play for except pride and four points that will have absolutely no effect on where either side finishes on the ladder. That being said Keysborough is a strong chance to win this one as Chelsea Heights may take the opportunity to rest any players suffering from niggles going into the finals.

This is the second of two games which don’t mean much in terms of ladder position. A win for Hampton may seem it jump into sixth spot if Murrumbeena lose but for the Hammers it still won’t mean finals. Port Melbourne had the minor premiership wrapped up about two months ago and may also take the opportunity to rest players if need be.

This is the game everyone will have their eye on come Saturday with the winner to advance through to the finals while the loser will spend the hours after the game organising Mad Monday. With both sides locked on points, all each needs is a win and with the sole game played between these two sides going the way of Highett, the Dogs will deservedly go into this match as favourites. Murrumbeena are a better side at the Beena arena however, and with a spot in the finals on the line we could see their best football.