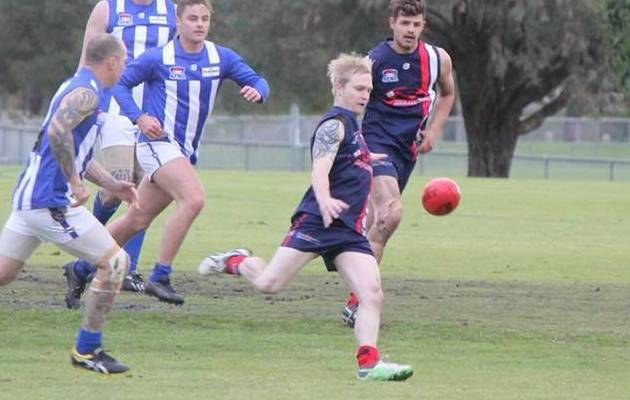 
Listen back to this week’s The 5th Quarter podcast, featuring Highett President Lex Marshall as the special guest, in the player above.

Lyndale has registered back to back wins after a final quarter blitz saw them come from behind to claim a valuable victory over Sandown. Looking to back up their good win against the Roos last round, the Pumas started brightly booting five goals in the first term.

However from then on finding the goals was a struggle for the home side as they kicked just one major in the next two quarters, surrendering the lead to the Cobras at the last change.

Sandown’s defence had been excellent during this period and even managed to hold the home side scoreless in the second term, no mean feat considering the Pumas ability to score heavily.

But with a spot in the top four on the line, the home side came out breathing fire in the final term and slammed on seven goals to zip to run away with the contest.

Moses Faaola was once again a cut above for the Pumas, slotting three goals with his clean ball use a highlight. Trent Day also continued his purple patch with four goals, making it nine majors in his last two appearances.

The Cobras did a lot right for most of the day but were just overwhelmed in end by a side that is trending upwards. Matthew Dickson put in a spirited performance for the visitors, while James Tate continues to find the pill.

Dandenong have broken through to end their winless drought, edging out Moorabbin by 11 points in a sensational game of footy at Greaves Reserve. In their first victory since Round 18, 2016, the Redlegs stunned the Kangaroos with an inspirational and spirited team performance.

The home side set the tone early, bringing great intensity and effort to hit the scoreboard early and take a 13 point lead at the first change. The sloppy start seemed to spark the Roos into action in the second term, as they slotted three goals to one to snatch a slender lead at the half.

But the Redlegs would not be denied and turned the match on its head in the third term, piling on eight goals to one in their best quarter of footy for some time. Holding a 37 point lead with one quarter to play, the home side knew that the Roos would come hard at them.

And come hard the Roos did, kicking seven goals for the term and trimming the margin to set up a nervous few moments for the Redlegs. But with the match on the line, Antonio Gaetano calmed the nerves with a long goal into the breeze to ensure the home side would come away victorious.

Having toiled hard for no reward until this point, the win was a great story of perseverance and spirit from the home side. After 666 days between wins, at last the boys from Dandenong were able to link arms and sing the song with plenty of gusto.

The whole side contributed to the win a fantastic team performance highlighted by the fact that 11 players were able to hit the scoreboard.

On the flip side, the loss is a bitter blow for the Kangaroos who have now dropped out of the top four and are in serious danger of letting their season slip away.

Lyndhurst have made a huge statement, knocking off the previously unbeaten CPL by a comfortable 32 points at their home fortress of Marriott Waters Reserve. In a top of the table clash many expected a close contest, but the Lighting were able to grind out a solid win taking control after quarter time.

The first term was a fantastic contest with both sides trading goals with the visitors taking a slender two point led in an entertaining term.

Known for their dogged defence, the Lighting clamped down on their opponents after the break and remarkably did not concede a goal for the remainder of the match. The extraordinary achievement, keeping the best team in the competition goalless for three quarters, shows just how tough an assignment Lyndhurst are on their home turf.

The victory consolidates the Lightning’s position in the top two, with both clubs now sitting at 8-1. Ben Hiam, Aaron Cocker and Zac Davies were the most influential for the home side, while Hamish Browning was also good with three snags.

The loss is not disastrous for the Lions, but their inability to go forward with any efficiency for the majority of the match will be of slight concern. Shane Dunn and Steven Cormack were the best players on a rare off day for the club.

The round of shocks and surprises continued, with the Dogs knocking off the much fancied Dolphins by 14 points at the Naval Base. Not many would’ve given Cerberus any chance heading into this contest, but they were the much better side on the day and inflicted Frankston’s third loss for the season.

The Dolphins started well in the first quarter, but inaccuracy cost them taking a bigger lead at the break as they sprayed five behinds to go with their two goals. This ended up proving costly, as the Dogs found their bite in the second quarter, notching up four goals to take control of the contest.

From then on, the Dogs never let the Dolphins back into the contest as both sides fought hard for their goals. Frankston staged a mini comeback in the last term with three goals but this fizzled out meekly with Cerberus kicking two of their own to register a solid 14 point win.

The Dogs continue to show improvement and once again find themselves back in the hunt for a spot in the top four. Michael Schwarz and Simon Vanderfeen once again featured as the better players for the home side, while Patrick Jones was also good.

The loss is probably the most disappointing result for the Dolphins so far this season, as they were warm favourites heading into the clash. Their poor accuracy in front of goal was once again on show, with the Dolphins actually having more scoring shots yet still going down comfortably. Jacsen Trewhitt and Cameron Collett were the best for the visitors.