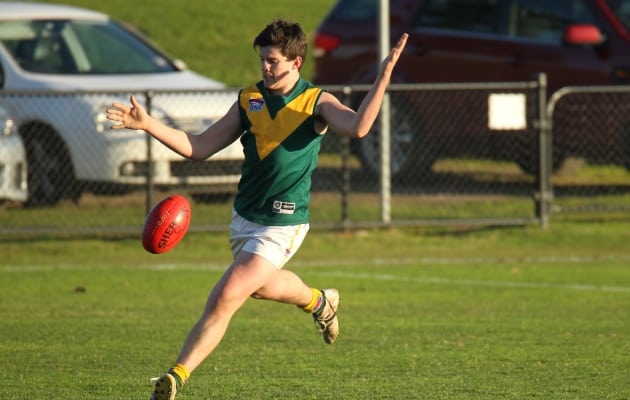 Endeavour Hills’ winning margin of 21 points failed to reflect the magnitude of its dominance over Ashwood at Keysborough.

Selecting which Falcons’ player was best afield was a challenging task for the SFNL radio crew. But when the maths was done, it was Daniel Batson who claimed the prize.

He was a deserving recipient, racking up numerous possessions and using the footy effectively.

Endeavour Hills coach Rob Dipper believed the venue played a part in his side’s win. “I think the big ground suited us. We’re a young side, fairly quick,” he said.

Coming into the game, he was confident that if the Falcons could execute their skills well they would be a strong chance.

Several Falcons other than Batson staked worthy claims to be selected as best on ground. Shaun Richards controlled the backline and snuck forward to boot a long-range third term major that took Endeavour Hills’ lead beyond five goals.

Byron Hoe and Daniel Strom were other outstanding contributors for the Falcons. Hoe’s ability to hit targets impressed Rossborough.

Dipper was quick to point out that whilst everyone notices Hoe and Batson, Endeavour Hills’ midfield runs much deeper.

Jayson Bruce and Nick Gay were a couple of others who impressed him.

Ashwood pulled a major surprise, naming Matt Menzies in the ruck after coach Rossborough had declared him no chance to play due to health issues.

Menzies was far from his best and was soundly beaten by in-form Falcon Nathan Crutchley.

Rossborough conceded he shouldn’t have been persuaded to include Menzies, with the ruckman experiencing a flare up of his pre-existing medical condition.

It was a day to forget for most of the Magpies, although Jake Chapman worked tirelessly and could hold his head high.

Gav Mahony was another to give a good account of himself, whilst Frank Martinicchio was a zippy presence in the Ashwood forward line. He put through two classy snaps in the final term to spark the Magpies into life, and set up his side’s other goal for the term.

However, Endeavour Hills’ lead had blown out to 39 points early in the last stanza and the Falcons were never going to be overrun from there.

As the Falcons’ coach indicated, his players were able to keep pressure on their opponents for most of the match. This restricted the Magpies’ ability to deliver the footy to their big forwards, who had concerned Dipper given the dry day.

The win carries Endeavour Hills into a battle with Hallam for a Grand Final spot.

Ashwood now faces a long road if it is to reach the decider.

The first step towards resurrection entails a do or die Semi Final battle with Doveton Eagles.

The only variable during the Elimination Final was the weather, with the game all too predictable from early in the piece.

Whether or not spectators were taking in sunshine or seeking shelter from the rain, the onfield story was one of Doveton dominance.

As for the weather, although changeable, it was far kinder than it had been during the reserves game in which players were pelted with hail.

Black Rock’s seniors battled so hard to reach the finals, they appeared to have little left to offer when they got there. But it would be selling Doveton short not to acknowledge the part played by the Eagles’ pressure and purposeful ball movement.

It took less than a minute of play for Mitchell Clarke to nail Doveton’s first goal and Russell Robertson soon added another.

At the first break, with Doveton leading by 26 points, Black Rock coach Jay Williams urged his players to play with more purpose. He stressed the need to cut out sloppy handballs and to tighten up on Doveton’s Michael Callinan and Cory Wilson.

The Jets closed the gap to 11 points late in the second term, but that was as close as they would get.

A Sean Paynter goal on the run was followed by a Robertson major and the Eagles went to the long break with a 21-point advantage.

Callinan continued to torment the Jets, booting the first major of the second half, punishing a Black Rock turnover. That proved to be the end of the contest, with Doveton romping to a 35-point lead by the last change.

The Jets were able to register only 1.9 for the second half as Doveton went on to a 34-point victory.

He was delighted with his backline as a whole, but particularly noted the efforts of Dale Jose, Kaine Bundy and Todd Byers. Byers shut down the dangerous Brenton Rafferty, who has hurt the Eagles previously.

Caldwell praised his midfield believing it enabled Doveton to get on top of its opponent from the outset.

The Eagles named Enayte Samadi their best player ahead of Jose.

Such was Doveton’s team performance, Callinan and another strong performer, Travis Graeske failed to get a mention in the Eagles’ top six contributors.

Daniel Kick and Will Sanchez were best for the beaten Jets.

Despite the loss, Black Rock can take encouragement that good recruiting can put it in the premiership mix next season.

Jay Williams’ knee injury prior to the season hurt the side onfield. However, his inability to play freed him up to take on the coaching role and he proved he has plenty to offer.

Meanwhile, Doveton fronts up again for an intriguing Semi Final stoush with Ashwood.