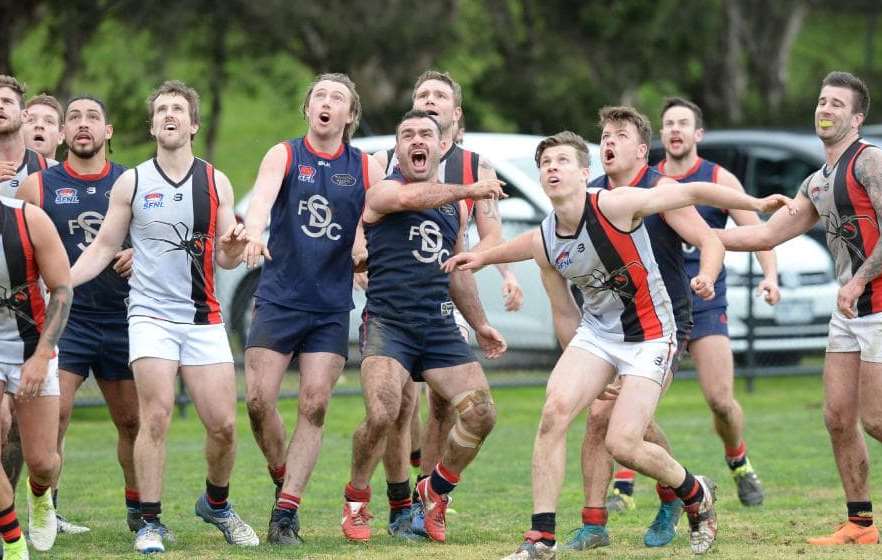 Hampton Park’s dominant third term enabled it to snatch a one-goal lead at the final change.

Springvale Districts was the more purposeful side in the first half and started brightly after the long break, with a Mitch Betson goal extending the Demons’ lead to 15 points.

However, the Redbacks then started looking venomous, with midfielder Cory Phillips particularly prevalent and repeatedly driving them into attack.

He inspired Hampton Park to take a direct approach, delivering the ball quickly to its forward line.

That reaped rewards on the scoreboard through the polished finishing of Cam Williamson.

He kicked all three of his side’s third-term goals, starting with an accurate set shot, before adding a couple of impressive snaps.

Springvale Districts, though, struggled to get the footy forward of the centre for much of the third stanza.

Betson’s early major proved to be the Demons’ only score for the term.

To three quarter time the match had been a low-scoring competitive grind, characterised by stoppages.

Players from both sides had found space hard to come by and whoever had the footy was invariably put under pressure.

The last term promised more of the same, with a tight finish on the cards.

George Angelopoulos had been outstanding all day for the Demons and pulled them level with a goal early in the final quarter.

Nathan Carver soon replied for the Redbacks, running into an open goal and restoring their advantage.

Surprisingly, that was Hampton Park’s last goal, whilst the Demons added four more.

The first of those came from Will Nevill, with best afield Angelopoulos adding the last in time on.

Springvale Districts triumphed by 19 points in what was an intense final, with Angelopoulos and Betson each finishing with three goals.

‘It’s a grand old flag’ was sung in fine style in the Demons’ rooms, and the sense of achievement among players, coaching staff and supporters was palpable.

Still, as a voice was quickly heard to say, ‘There is still one to go’, with Springvale Districts having booked its passage through to the division’s decider on 16 September.

Demons’ coach Kris Thompson was proud of his players’ resolve when they were challenged, particularly praising the focus of Angelopoulos who withstood the relentless attention of the Redbacks.

Harley Primrose was named best for beaten Hampton Park, ahead of backman Jackson Fry, and Phillips.

The Redbacks suffered an early setback with a hamstring injury putting midfielder Shannon Henwood out of the match.

Springvale Districts has earned a break before the grand final, whilst Hampton Park will front up for the preliminary final, with the potential of getting another crack at the Demons in the year’s biggest game.

An air of inevitability hung over Power Reserve for most of the day with an Endeavour Hills’ victory never really in doubt.

Whilst Ashwood was persistent in defence, it was unable to show any creativity going forward.

The Magpies were hesitant and predictable and never asked any meaningful questions of the Falcons.

There was always a feeling that if Ashwood managed to get the footy out of its defensive arc, the Sherrin would soon return.

However, whilst Endeavour Hills continued to create scoring opportunities these were frequently squandered, with many likely goals being turned into behinds.

That was a major factor limiting the Falcons’ winning margin to just 23 points.

There was a business-like feel in the Endeavour Hills’ rooms after the game, and whilst the song was sung the rendition lacked gusto.

Although Ashwood’s year ended in disappointing fashion, the Magpies’ fourth-placed finish was a true reflection of their season.

They deserved their spot in the finals, but lacked the depth of the other teams involved in September action.

For the victorious Falcons, Daniel Cann benefited from a Round 18 rest, leading the way as his team’s best.

Neither side had a multiple goal scorer.

For beaten Ashwood, Jake Chapman was his usual determined and efficient self, whilst David Reilly was resilient in defence.

Brett Figas edged out those two as the Magpies’ best.