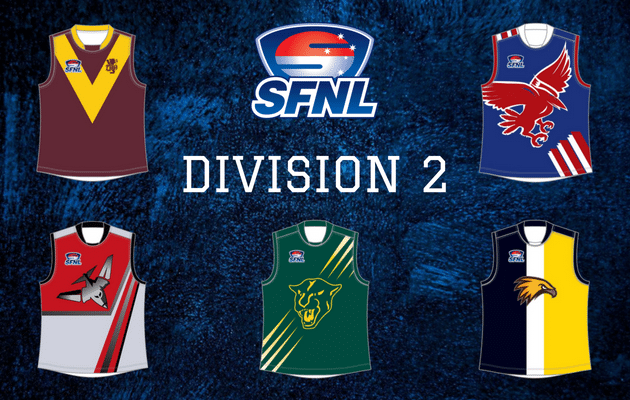 There were plenty of highlights during an action-packed Round 6 of Division 2 in the Southern Football Netball League, with Skye notching its first win of the season, while Mount Waverley caused a stir with the upset of the round.

It was a battle, but the Bombers did just enough to claim their first win of the season, in an entertaining game against the Clays.

Just three points separated the two sides at three quarter time, to Skye’s advantage, with the visitors booting three goals to one in the final term to run out 17-point winners.

Ben Evans and Cameron Petrie each booted three goals in the win, while Taylor Hughes and Brett Dawson were named the winners’ best.

It was the home side enjoying a solid start to lead by four points at the first change, before the visitors edged ahead to the tune of 10 points by the main break.

Clayton hit back in the third, outscoring Skye two goals to one to cut the lead down to three points, before the Bombers flew home in the last to claim the victory.

Jack Coutts was impressive for the home side with two goals, while Josh Llerena was named their best.

To think this could’ve been a massive win for the Lions in terms of percentage, but the result remains just as big for Mount Waverley, knocking down a finals aspirant.

While inaccuracy plagued the home side for the majority of the match, only managing two goals through three quarters, a decisive final term – where they booted five majors – got them over the line after they trailed by 22 points early on.

Alex Mullucks was the lone multiple goal scorer with two majors in an impressive performance, with Stuart Pike and Philip Schulz also having an influence.

Mount Waverley seemingly dominated possession of the ball throughout the first half but failed to have a significant impact on the scoreboard, kicking 2.8, with Caulfield’s 4.5, giving it a nine-point half time lead.

A low scoring third term saw the margin remain the same, despite the Lions having five more scoring shots, before the hosts finally broke away in the last, booting the last five goals of the game to win by 10 points.

It may not have been their best performance, but the Burra got the job done when the game was on the line to record a 40-point win against the Hammers.

The hosts led by just 12 points at the final change but kicked four goals to zero in the final term to cruise to victory.

Chris Bryan was dangerous inside 50 with four goals for Keysborough and was also named as his side’s best player with Adam Machnikowski.

A tight contest saw the visiting side take it up to their more fancied opponents and although Keysborough led by 14 points at the main break, it was being pushed.

Hampton had its chances during the third term, but inaccuracy proved costly as it kicked 2.5 to 2.3 to only reduce the margin to 12 points.

Keysborough made them pay in the final term, hitting the scoreboard for four majors while keeping the Hammer scoreless.

The ladder leaders needed all four quarters to overcome a gutsy Highett opponent, with a strong final quarter lifting them across the line by 38 points.

The Eagles led by 14 points at the final change, after overcoming a 28-point quarter time deficit, but put their foot down during the fourth quarter to pull away for the win.

Highett got away to a near-perfect start in the opening quarter, shooting out to a 28-point lead courtesy of six goals to one.

The home side switched on in the second, booting six goals of its own to just one behind to complete a 40-point turnaround and lead by 12 at the main break.

The two sides were on par during the third, each kicking two goals, before Doveton surged home in the last, with four goals to one securing a 38-point win.

Courtney Waddell and Yianni Pasialis were named the Dogs’ best.

A decisive second half from Murrumbeena has lifted it across the line against East Brighton, with the visitors winning by 38 points.

The Beena trailed by four points at the half time break but booted eight goals to one in the second half to end with a comfortable win.

The two sides were on even terms for the majority of the first half, with both kicking three goals in each quarter, though it was the Vampires with a four-point edge at the main break.

Murrumbeena lifted another gear in the third term however, booting six goals to just two behinds to break away to a 33-point lead, before capitalising with another two goals in the last.

Kai Love-Linay was in excellent form for the Vampires, booting four goals and was best for his side.