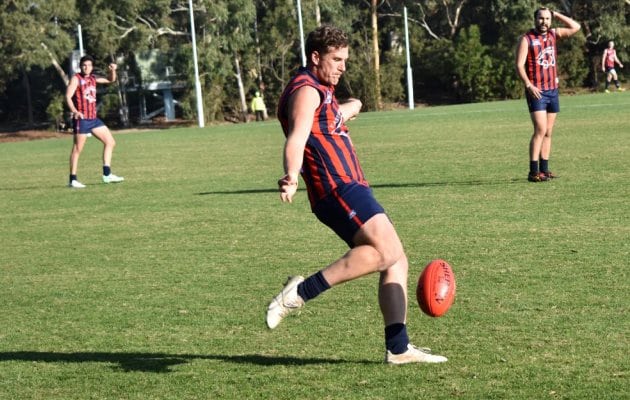 Mordialloc have consolidated its spot at the head of the Division 1 ladder after thrashing Chelsea Heights by 84 points at Beazley Reserve.

In blustery conditions the Bloods wasted multiple opportunities to put the Heighters to the sword, including booting a wayward 1.8 in the second term. By the final siren the visitors had managed 35 scoring shots to six – a whopping differential that further underlined Mordi’s dominance.

Bloods ruckman Buddy Spohn made an impact in his return from injury, while Tom Curry, Dave Marguglio and Danny Nicholls were all impressive contributors for the winners.

Ben Finemore stood out for the undermanned Chelsea Heights in his first game for 2018, with Dale Hynes and Daniel Campisano also fighting valiantly in the defensive half.

The Districts pulled off the upset of Round 8 with a character-building 14-point away win over Bentleigh.

It was a tough, low-scoring slog in difficult conditions all afternoon, but the young Oaks had enough petrol in the tank to overrun the hosts in the last quarter.

Facing a 14-point deficit at the half, the Demons rallied in the premiership quarter, booting three goals to one to get back within a point at the final change. But Oakleigh District responded to the challenge, booting the only two goals of the last quarter to claim its third victory of the year.

Franceso Bonacci was instrumental in the Oaks’ boilover with a best-afield display, while ruckman Saf Balic revelled in the absence of Bentleigh big man Mitch Smart. The trio of ever-reliable leaders in Brody Hodic, Paul Fermanis and Ryan Pearson were also predicably influential.

Michael Rogers, Tom Cunningham and Jackson Meredith kept Bentleigh in the hunt with their work around the contests.

Over at Dunlop Reserve, East Malvern continued to stake its claim for premiership favouritism with a clinical five-goal defeat of fellow contender St Kilda City.

Five goals to the Panthers in an impressive opening stanza had City on the back foot from the outset and by half-time the Saints had been kept to just three goals. At this point, the hosts’ advantage had been stretched to a match-winning 34-points.

The Saints fought back in the second half and hit the scoreboard with more regularity, but East Malvern had all the answers and consequently the visitors could make no inroads into the deficit.

Mitchell Ferguson made an impressive return to the senior team with a five-goal haul in the Panthers’ victory, while Xavier Linton chipped in with three majors. Further up the ground, Luke Duffy and coach Nathan Robinson displayed their class and were both prolific ball winners.

Young Xavier Jordan continued his stellar form for St Kilda City, with Aaron Purvis and Nick Perry also among the standouts. Big Ray Lengyel was also industrious in his first game back in Saints colours.

The Doggies have maintained its spot in the top three courtesy of its come-from-behind 15-point victory over the plucky Rosellas at Jack Barker Oval.

Following their lacklustre defeat at the hands of Mordialloc in their last outing, Cheltenham were keen to make a statement. They did just that, jumping out of the blocks with an impressive brand of footy to take the early lead, despite some missed shots at goal in the first term.

By half time the Rosellas were 15 points to the good in a low-scoring affair, and with the Dogs held to just two goals, an upset was on the cards.

But St Pauls responded after the major interval, booting four goals in the third term to restore parity at the final change.

Unfortunately the gallant Rosellas were left to rue their early inaccuracy as the visitors finished full of run to cruise to their sixth win of the year.

The Dingoes have snapped a three-match losing streak with a hard-fought victory over Port Colts at the Den.

A five-goal second term was the catalyst for the home side as they bounded to a 29-point half time lead.

The bottom-placed Colts, however, refused to roll over, and made the most of their forward opportunities which help them back into the contest in the second half.

A pair of steadying goals to the Dingoes in the final term saw off Port’s challenge, with the visitors falling 13 points short.

The dynamic Rob Rusan was again the star up forward with four goals for the winners, while the usual suspects in Chris Horton-Milne and Lucas Walmsley again led from the front.

For the Colts, Michael Egan booted four majors to be named his side’s best ahead of Sean Gunning and Jordon Allen.