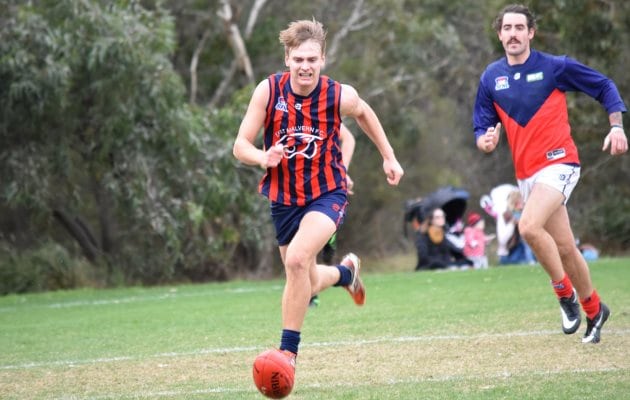 The Panthers have claimed top spot on the SFNL ladder after a dominant 98-point thrashing of Chelsea Heights at Dunlop Reserve in what was the round’s only blowout.

The hosts were too strong from the outset, booting five unanswered majors in the opening stanza to set the tone for the day, before finishing the game with another eight final-term goals to blow the Heighters out of the water.

Ben Timms put in a tremendous performance to be named best on for the winners, with Xavier Linton, Lachie Dowling and Jack Hammond contributing 10 goals between them.

Harry Czarnecki was again a pillar of strength down back for Chelsea Heights, while Phil Matheson and Ryan Archer also excelled.

The Rosellas have claimed their first victory of the year, holding on in a two-point thriller at JL Murphy Reserve.

After an even first term, the Colts booted four goals in the second quarter to skip away to an 11-point half time lead.

The visitors lifted after the break and used the strong wind at their backs to their advantage, booting three telling goals to enter the final change eight points to the good.

But the game was far from done, as the Colts, with the aid of the breeze, made a strong challenge for the lead. The Rosellas, however, refused to relinquish their advantage and fought hard to hold out the home side to in a pulsating final quarter.

Conrad Hudghton, Drew Kelly and Jarryd Bloink all found plenty of the footy for Cheltenham, but it was 2017 Sparrow Medallist Anthony Malamas that impressed most, booting three goals in a sparkling senior debut.

The Colts were well served by Torrent Bonnett and the consistent Lew Mildenhall.

St Kilda City have suffered their first defeat of season 2018, beaten by Mordialloc to the tune of 26 points at the Peanut Farm.

The win is Mordi’s third in succession after back-to-back losses to start the season.

Although the Saints booted four goals with the wind in the opening stanza and led at the first change, Mordi booted three majors into it to enter the second term full of confidence.

From their the Bloods were able to gain the upper hand on the scoreboard and maintain their ascendancy for the remainder of the day in what was a hard-fought contest.

A seven-point three quarter time lead then blew out to 26 by the final siren with the visitors hammering home three unanswered goals in the last quarter.

Mordi big man Justin Summons proved an imposing presence around the ground, Lachlan Bull had the ball on a string and Matt Moore played his best game in the red and white stripes.

Troy Parker booted three goals for the Saints to be named their best player ahead of Nick Perry and Will De Bruin.

The Oaks have pulled off one of the boilovers of the season, pipping a fast-finishing St Pauls by less than a kick in an absolute cracker at Princes Highway Reserve.

The previously unbeaten Dogs started brightly and found themselves three goals up within the first eight minutes of the match. But the Districts then upped the pressure gauge in the heavy conditions and put the clamps on their opponents, denying them the chance to run and spread.

As a result, Oakleigh booted nine of the next 10 goals – including five unanswered in the second term – to streak to a match-winning 24-point advantage at the final change.

As the game opened up in the last, the Dogs lifted, booting six goals to storm back into contention. However, the three goals scored up the other end saw the Oaks steady and hold on for a memorable, and possibly season-defining five-point win.

Oaks stars Simon Black and Brody Hodic were influential in the defensive half, while Mitchell Pierce starred with four goals in attack.

For St Pauls, Curtis Murfett was again in the thick of the action, while Matt Kreymborg and Paul Booth also made an impact.

Bentleigh has recorded one of the most stirring wins in the club’s recent history, knocking off bogey side Dingley by three points in a cliff-hanger at Souter Oval.

The Dingoes went into the clash having won nine of their past 10 head to head encounters, but it was the Demons that dominated the play early.

Bentleigh coach Pete Pirera would have been thrilled to have kept Dingley to just one goal at the half, however, his charges were unable to capitalise on the scoreboard in the early stages, with a wasteful 1.7 in the first term keeping the reigning premiers in the contest.

An 18-point advantage to the visitors at the final change – more than double the Dingoes’ score to that point – was decisive in a tight, pressure-filled slugfest where goals were at a premium. But the Dingoes broke the shackles in the last quarter, booting four goals – including three from the boot of explosive onballer Rob Rusan – to give the Demons an almighty scare.

Despite the Dingley resurgence, Bentleigh held their nerve late to deny the hosts a remarkable-come-from behind victory.

Mitchell Smart was again sublime in the ruck for the winners, with Michael Rogers, Tom Backman and Jackson Meredith providing plenty of support around the ground. Nathan Stagg also earned plenty of kudos for his shut-down role on dangerous Dingo Lucas Walmsley.

For the Dingoes, it was the Ades boys – Danny and Jack – leading the fightback, while co-captains Trav La Rocca and Jackson Peet also starred.