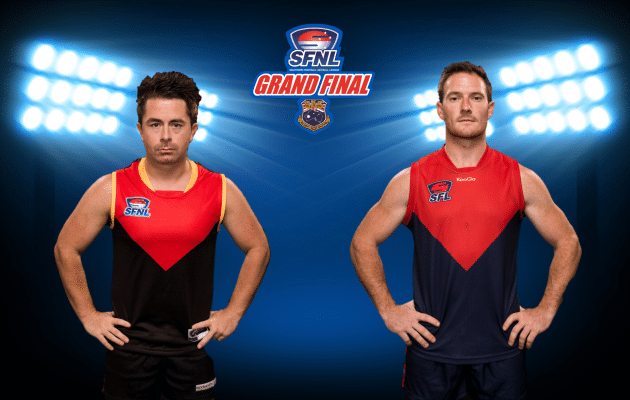 AFTER one of the most even Division 1 seasons in recent memory, we have now reached the very pinnacle of the competition.

And fittingly, it has been the two best performed sides throughout the year in Dingley and Bentleigh that have earned the right to play off on the SFNL’s biggest stage.

The Dingoes have been the benchmark side for the last three seasons, claiming their third consecutive minor premiership this season as they chase back to back Division 1 titles. Their challengers, the Demons, meanwhile, have proved they are up for the fight as they make their first SFNL Division 1 Senior Grand Final appearance.

Bentleigh’s meteoric rise from finals spectators in 2015 to the last day in September may have taken some within league circles by surprise.

Internally, however, it has been much different story, as the club has planned for finals actions since day dot. This, according to coach Paul Dimattina, has helped keep the weight of expectation off the players’ shoulders throughout this finals series – their first in the SFNL’s top flight since 1998.

“(Making the Grand Final) is something we set out to do from the start of the year so I just think they’ve been waiting for this day since pre-season started,” Dimattina said.

“We didn’t make any bones about it, we thought we’d recruited well and a few blokes have walked off the street we knew we’d have a good year so everything’s geared around September.”

But there is one more challenge the Demons must overcome in order to claim a fairy-tale premiership.

Dingley climbed to the summit of the mountain last year as they took home their maiden Division 1 Senior flag, but it’s a new look Dingoes side of sorts in 2016.

Of the team that took the field against Oakleigh District in the Second Semi Final a fortnight ago, nine were not members of the 2015 senior premiership squad. And they haven’t all been new recruits either, with more than half of them having earned promotion from the reserves team, including key forward Kristen Feehan and last year’s SFNL Division 1 Reserve MVP Kane Davidson.

But remarkably, at the heart of the team remains a very young core group of players. And the blooding of this group of talented kids is a major part of coach Shane Morwood’s blueprint for sustained success at Souter Oval.

“We’ve got a fair nucleus of the group that’s probably within that bracket of 22 to 25 (years of age),” coach Shane Morwood revealed.

“It’s still a very young team overall. They’ve still got a lot to learn so if they can stay together for the next two or three years and just keep learning and get more mature mentally and also physically then, geez, they are going to be a good team in two years’ time, three years’ time.”

Keeping in check the exuberance of the younger generation of players is a perfect blend of experienced campaigners. Captain and elder statesman Tony Lavars is universally regarded as one of the league’s most outstanding leaders, while Andrew Frost and first-year Dingoes Ryan Stewart and Chris Morgan also provide a mature presence around the ground.

But the Dingoes aren’t the only ones with Grand Final experience, with Bentleigh playing in a couple of premierships in recent years, both in Division 2 SFNL and in the VAFA, which should hold them in good stead come Sunday.

Both coaches believe the key to winning this game is controlling the ball through the midfield, and whichever side can get their hands on the footy first from the stoppages and get some time and space with it will go a long way to gaining the ascendancy.

This is where the ruckmen are critical, and an intriguing battle looms inside the centre circle.

Bentleigh’s Andrew Walsh has been a revelation in his first season at Arthur Street. Since crossing from Avondale Heights, he has established himself as the preeminent ruckman in the league with his sheer size, strength and work rate, allowing him to spoon feed his mids all day long.

Opposing him will be Dingoes pair Stu Cleeve and Chris Morgan. Individually, they will have their work cut out against the man mountain in red and blue, but in tandem the should look to really work him over and tire him out as the day progresses.

At their feet is perhaps where Dingley has the biggest advantage. They bat frighteningly deep through the midfield and possess a potent mix of inside ball winners and outside runner, with Chris Horton-Milne, Marcus Freeman, Dan Farmer and Luke Bartholomew all deadly.

More importantly, they have plenty of midfielders hitting the scoreboard, which eases the reliance on Division 1 leading goalscorer Calhan McQueen to kick a big bag. Notably, the side had seven individually goalkickers out of their nine goals in the Semi Final victory over the Districts, and McQueen was held goalless.

“Over the last four years, one of the key focuses has been for our on-ball brigade to actually get on the scoreboard… and it’s been one of the improving points over the last two, three years,” Morwood said.

“We’re not reliant on one source (for goals) and I think if teams can have that then they are in a pretty good position.”

Bentleigh’s elite fitness sees them employ a fast, running style game, particularly out of defence, where they are deadly on the rebound. As such, Dingley will look to lock the ball in their forward line to prevent their running backs in Mortimer, Scott Lawry and Josh McGarry from rebounding out of defence.

And despite the loss of key forward targets in recent weeks, the Demons have shown that if they move the ball quickly enough, they can spot up leading targets, as evidenced by the mercurial James Robertson’s six-goal haul against the Oaks last week. He looms as one of the game-changers for Bentleigh.

Sam McGarry and Ben Morrison have also been among the goals recently, and you can expect the Dingoes to put some work into them.

Barama Blow and Todd McLean were also excellent in blanketing key District’s playmakers Ryan Pearson and Jake Mullen in the prelim, so you can bet Dimattina and his coaching staff will have done their homework and ensure they have the midfield match ups right again this week.

Dingley enters the game having played just one match in the last three weeks, giving it plenty of time to rest niggles and ensure it is in top shape for Sunday. As a result, its list is as healthy as it can be.

Conversely, the Demons have had a few concerns, and may again be without star forward Matt Troutbeck, who injured his shoulder late in the Qualifying Final against Oakleigh. But will superstar spearhead Pat Nicholls make a surprise return to the side for the big game? After the big fella jetted in from the USA in recent days it is all but assured, and his inclusion will no doubt greatly bolster its forward line and by extension its flag chances.

The Demons no longer fear Dingley, who got the monkey off they back with a comprehensive victory in their previous head to head meeting – their first ever triumph over the Dingoes. But this will be a completely different ball game.

Expect a thrilling contest between two fantastic teams, but the all-round strength of this tremendous Dingley side should see them win back to back flags. Dingley skipper Tony Lavars is one of the SFNL's most inspirational leaders.[/caption] Dingoe Dan Farmer poses a serious threat both through the midfield and in attack.[/caption] Spearhead Calhan 'the Dream' McQueen is a player the Demons will look to keep quite.[/caption] Gun goal kicker Pat Nicholls is set to return to the side after flying in from the USA.[/caption] Expect Demons ruckman Andrew Walsh to again have an influence.[/caption]