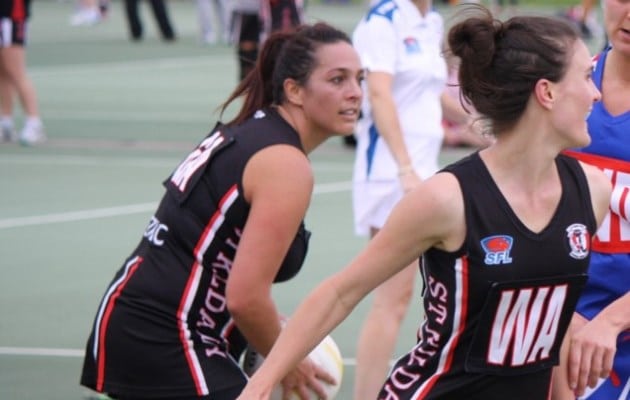 Keysborough took on Bentleigh in Round 5, looking to consolidate their position as one of the main challengers to Dingley’s Division 1 crown.  Bentleigh came into the match not having won a game in 2016, yet every side that plays them makes mention of how difficult a match it has been.

The start of the match was dominated by Keysborough, as they registered six goals before Bentleigh were able to manage a shot.  Bentleigh were able to work their way into the match late in the quarter to go into the first break behind by 12-5, but Keysborough resumed control in the second term to extend their lead to 25-10 at the main break.  This was a tough, physical affair with no easy ball conceded by either side, but Keysborough had just a little more polish, and with shooters Abby Mackie and Laura Agius deadly under the hoop, they were able to outlast a fast-finishing Bentleigh by 41-25.

Dingley played Caulfield in a game that pitted one of the more lethal shooting combinations in division one against a very strong Dingley defence.  And it was the defences that were on top early on as the sides were unable to be separated at the first break, going in at 7-7.  Dingley began to take control in the middle of the quarter, with their ball movement being some of their best of the season so far.  Caulfield shot well when they had the opportunity to stay in touch, but Dingley took a 22-15 advantage into half time.  Caulfield battled hard throughout the second half but were unable to prevent Dingley from extending their lead at each break, with the final margin being 47-32 as Dingley maintained second place.

Heatherton came into the game against St Kilda City unbeaten, and also left it that way.  Heatherton moved the ball slickly whilst being very tight in defence, making St Kilda City work for every metre that they gained.  It was very noticeable how hard the Heatherton girls were prepared to work without the ball, and when they were able to win it back they showed great proficiency at utilising their height advantage in the goal circle.  A half-time score of 35-15 reflected Heatherton’s dominance.  The instruction to St Kilda City at half time was to pass long at every opportunity, but nothing they could do made any real impression on the scoreboard as Heatherton registered the next four scores, and continued on their merry way to finally win by 68-25.

The match of the day in Division 2 saw unbeaten Heatherton take on a CPL side that held fourth spot despite having lost their previous two matches.  The Heatherton girls began by mimicking their division one club mates as they used the full width of the court, utilising diagonal passes to make ground and create opportunities.  Meanwhile in defence their pressing game made CPL’s short, precision passing difficult to achieve.  Thus Heatherton took control early and won every quarter, finally prevailing by 43-21.

Bentleigh took CPL’s spot in the four with a hard-fought 38-28 victory over St Kilda City.  There was little in this game to half time, with Bentleigh going to oranges with a 21-17 lead, but it was the third quarter in which the red and blues were able to gain traction.  St Kilda City fought valiantly in the final stanza but were unable to make up the deficit as Bentleigh did enough to maintain their three-quarter time advantage.

The other two Division 2 clashes were real nail-biters.  Mordialloc showed last week that they have learned how to hold a lead.  Here against second-placed St Pauls they were first out of the blocks, winning the ball well mid-court and shooting well when within the shot circle.  St Pauls never allowed the margin to blow out, being behind by two at quarter time then five at half time, before reducing the margin to two again at the last break.  After St Pauls scored first in the last quarter the game ebbed and flowed to the finish, but it was Mordialloc that finished the stronger, finally winning by 35-31.

Meanwhile Dingley played Chelsea Heights in an absolute beauty.  The game went from end-to-end early with both sides able to score.  Chelsea Heights looked marginally the more fluent, and finished the first term with a one point lead, that became a two point deficit at half time.  Dingley spent a lot of the third quarter with the ball in attacking positions, but seemed a little shot-shy as the tenacious Chelsea Heights girls gave nothing away.  The last quarter showed both sides threatening to break the game open, but it was Dingley that finished the game slightly the stronger, winning by 26-24.

Division 3 sees Heatherton and St Kilda City remaining unbeaten, with wins over Dingley (34-25) and Black Rock (39-25), respectively.  Dingley and Caulfield round out the four, with Caulfield defeating Keysborough by 24-21.  Clayton maintained the pressure in fifth by defeating Skye 31-14.

The early Division 4 pacesetters are Dingley, and they were comfortable 50-10 winners over Lyndale.  Heatherton White are second (winning 35-21 over Caulfield), by percentage from Keysborough, who beat South Yarra by 27-17.  Elsewhere Highett 36 beat East Brighton 25; Highett 34 beat Springvale 23, while fourth-placed Heatherton Black had the bye.

Division 5 is headed by Heatherton and Dandenong, both maintaining perfect starts by beating Cheltenham (33-19) and St Kilda City (56-34), respectively.  Lyndhurst, who had the bye, remain third while Bentleigh held fourth by beating Skye 25-15.  Elsewhere Black Rock beat Dingley 44-27, while Mordialloc won a cliff-hanger against Chelsea Heights by 17-16.

Lyndhurst lead Division 6, winning here against Highett by 44-27.  Lyndale beat CPL 29-12 to remain second, while South Yarra’s 24-18 defeat of Clayton keeps them in third.  Caulfield’s narrow 34-33 win over St Kilda City allows them to take fourth spot, while Dingley completed wins to the top five sides by accounting for Hampton by 31-16.

Division 8 saw Cheltenham (47-10 winners over Lyndhurst), and Heatherton (who beat third placed Keysborough 30-14), as runaway leaders.  Dandenong beat Doveton 60-0 in the other game.  In the under 19's Dingley Two beat Dingley One 32-17, while Mordialloc Two beat Mordialloc One 37-17, Skye having the bye.