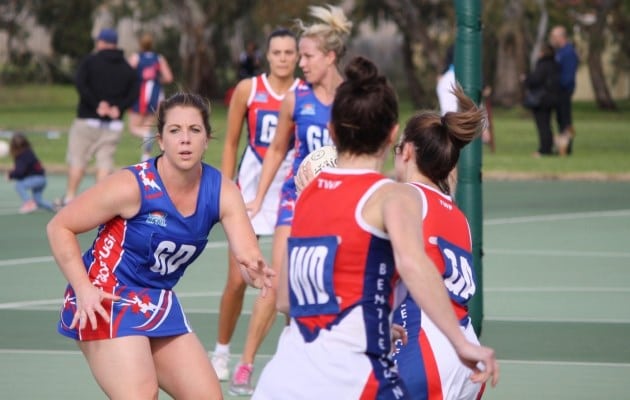 Hampton's Tori McLure and Highett's Emma Hamilton joined Mel and Hugh to discuss all things SFNL Netball on this week’s episode of Nothing But Net. Listen back to Sunday’s Nothing But Net podcast in the player above.

As finals loom, there were vital matches in numerous divisions, and under these circumstances a wind of near-biblical proportions could well have been done without. Still, this was what confronted the players in the SFNL in Round 14.

St Kilda City officially bowed out of the finals race having fallen to the might of Heatherton Black. Bayley Mifsud was the dominant factor early, showing elite control of her passing game in conditions that made many a fine player look like a novice. As the day progressed sister Zali and Steph Peacocke also came to the party, with Rahni Samason prominent as Black put on a passing and shooting clinic. An eight-point quarter time lead was extended to 32-9 at half time, and 46-12 at the last break. Heatherton Black were in no mood to let the foot off the accelerator with City throwing their side around into positions unfamiliar, and surged to a 60-16 victory that makes a certainty of the double chance.

Dingley have one hand on the minor premiership after a 26-18 win over Heatherton White that owed more to methodical efficiency than it did to brilliance, not that this was possible on such a day. White travelled with the wind in the first quarter, which was slightly the easier way to go, and started with great enthusiasm and greater surety of passing. While Bella Riddell and Teena Mifsud provided a threat early Dingley steadied to go into the first change level, and took charge to lead 16-11 at the long break. Dingley had adjusted to the wind by the third quarter and they came out hungry and able to read White’s passing, picking off their short game and forcing them into riskier long passes. Whilst White shot well once in the goal circle the mid-court pressure applied by Dingley made getting it there a tricky proposition, and in a low scoring second half the Dingoes experience and know-how won the day.

Keysborough arguably controlled the ball through the gale better than any side early on this week, passing short and flat and getting the ball to Jaimee Plumb and Tara Bickham in dangerous positions. Into the wind in the first quarter Keysborough took a 10-3 lead to quarter time and used the ball well with the wind behind them in the second term to extend their advantage to 22-9. After half time Laura Agius played several brilliant passes into the circle and Jaimee Plumb in particular gave her opponent great grief despite many shots being blown off course without even hitting the ring, and despite the best efforts of the rebounding Kelsy Dornau and the consistent Ky Brown, Keysborough took fourth spot and pole position for the last finals spot with their 34-17 win.

Caulfield took advantage of having the northerly at their backs in the first quarter against St Pauls, with Sophie O’Shea making what others found impossible look quite routine. At the other end Phoebe Naughton played arguably her best game of a fine season, pulling down defensive rebounds at will as Caulfield took a 14-7 lead to quarter time, and as Georgia Hernan also found her shooting range Caulfield were almost out of sight at 30-15 half way through. St Pauls seemed to adjust better in the third term, and with Grace Healey and Alice Williams shooting accurately for St Pauls despite largely feeding off scraps they won the last term, but Caulfield tuned up well for the semi finals with a 45-32 victory.

With Dingley leading on 50 points, and Heatherton Black on 46 and Caulfield on 40 also safe in the top three, only fourth place is in dispute in the final round of matches. Keysborough hold fourth on percentage over Heatherton White, and White will need to at least match Keysborough’s result and make up 6.69% to go past the first week of August.

Division 2 is set, with Heatherton unbeaten on 48 points, Dingley on 40, Caulfield on 28 and South Yarra on 24 being the top four sides. While Heatherton put their feet up for the week, Dingley continued their momentum with a 35-15 win over Bentleigh. Mordialloc beat St Kilda City by 32-18 and Caulfield previewed the elimination final by beating South Yarra by 19-13 in a battle of defences. Round 15 is effectively match practice as the order within the four cannot change, but St Kilda City, Mordialloc and Bentleigh will all be keen to end their season on a high by taking the scalp of one of the top sides.

Division 3 is the one that could go in several different directions on the last day. Clayton can secure the minor premiership with a win over fourth-placed St Kilda City, but such a loss will cost City a semi-final spot if Keysborough can defeat last-placed CPL. Heatherton in second play sixth-placed Black Rock knowing they can still move up or down, while Dingley in third need to anxiously watch the action as they have the bye. This week Clayton put CPL away by 41-7, Heatherton shaded St Kilda City by 33-27, Dingley beat Caulfield by 37-14, and Black Rock were a little too polished for Lyndale, winning by 29-19.

Caulfield will take the minor premiership in Division 5, Dandenong’s forfeit against them meaning they can afford to lose in the last round and still take top spot on percentage. Dingley lead the chasing pack after their close 39-38 win over St Kilda City, but must still beat Bentleigh in Round 15 to be sure of the double chance. Lyndhurst and Heatherton fill the last two finals positions – they played in Round 14 with Heatherton prevailing by 31-30. This ends the chances of Skye and Cheltenham despite their round fourteen wins (35-14 over Bentleigh and 37-19 over Highett respectively), while elsewhere East Brighton beat St Pauls by 25-19.

It’s close at the top in Division 6, with Heatherton on 46 points leading Dingley Red, Dingley Gold and Doveton all on 44. With all four teams playing lower placed opposition the order is unlikely to change, but should Heatherton slip up against South Yarra they could conceivably drop from first to fourth, which is exactly what Doveton did this week with their 24-21 loss to Mount Waverley. Heatherton beat Mordialloc by 22-21 to end their slim finals hopes, Dingley Red beat Aspendale by 41-25 and Dingley Gold beat South Yarra by 37-14 to secure finals action. Clayton subjected Hallam to another close loss, by 26-21, and Lyndale 36 beat St Kilda City 16 to complete Round 14’s matches.

Dingley have been very impressive all season in Division 7. They made sure of top spot by beating Murrumbeena by 23-16, leading the division by eight points with a game to play. Oakleigh District secured the double chance with a 35-18 success against Hampton, while Lyndhurst and CPL will also play finals. Lyndhurst were too good for Heatherton by 39-24 and CPL convincingly defeated Chelsea Heights by 39-16 in Round 14. East Brighton continued their strong late-season form but alas their 39-36 win over St Kilda City will be to no avail, while Cheltenham were forced to forfeit against Doveton.

Unbeaten Keysborough played a Mordialloc side that hadn’t tasted defeat since round one in Division 8. Although the game began reasonably evenly, Keysborough asserted their authority over their nearest challenger to the point that they won by 44-15. Dingley beat Dandenong by 26-24 to make sure of third spot, while Lyndhurst are certain of fourth despite their 37-20 loss to Hallam. Mount Waverley 18 beat Heatherton 10, Caulfield 21 beat South Yarra 4, and Lyndale 23 beat Black Rock 12 to complete the round.