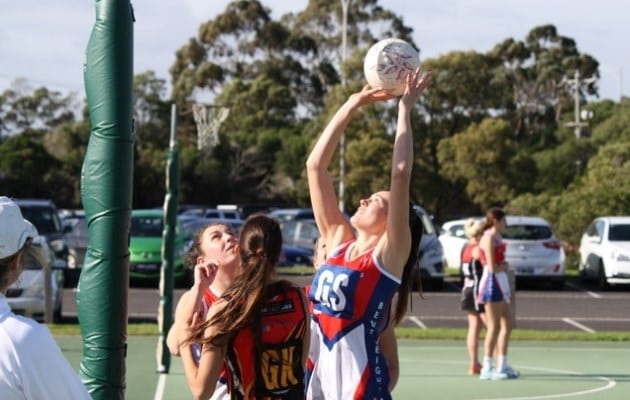 You know that you’re in Melbourne when you leave in the morning packing your sunscreen as well as your umbrella. And so it was on a Saturday when puddles were as commonplace as the steam that later rose above them.

Bentleigh took on Dingley in the knowledge that they had finally got the monkey off their back, and a win on the board. And it was with the confidence that this brings that they began to move the ball with purpose and assuredness early in the match. But this is a Dingley side that at this time of year is in no mood to be trifled with, and as the first quarter continued they began to assume control. A six-goal lead at quarter time set the game up, a lead that was doubled by half time. The Bentleigh girls never threw in the towel (wet though that towel may have been by the finish), but Dingley are beginning to tune up for another finals assault and coasted to a 49-31 victory.

Heatherton played Keysborough also keen to send a message. Rahni Samason was re-united with Nat Billings in the goal circle, and they wasted no time in getting back into their groove. Keysborough are, however, a fine side in their own right, and they reduced their 10-goal quarter time deficit was reduced to eight by the main break. It was in the third term where the Heatherton girls really made their move, and had seven goals on the board after half time before Keysborough could blink. Turning for home 22 in front, they were able to coast through the final quarter to win by 56-32.

The best contest of Division 1 involved the youthful running machine of Caulfield and the methodical St Kilda City. Both sides were missing interleague level shooters with Sophie O’Shea and Billie Nukunuku missing, and the evenness of the two combatants was evident from the start. After a first quarter when the momentum appeared to swing hither and yon with each passing minute, Caulfield took a one goal advantage to the first break. This trend continued in the second term. Whilst the slender lead stretched to three by half time City will have felt that they were well in this, but they were down to the bare minimum in terms of playing numbers, and in the third term it began to show. Caulfield seemed to have more energy in their legs but couldn’t quite put City away, and having got their second wind City went about hauling in the seven goal lead. With four minutes left the City girls had all the momentum, but they could get no closer than three, and Caulfield steadied at the end to win by 34-28.

The big battle in Division 2 is between Bentleigh and Mordialloc for fourth spot. Mordialloc took fourth this week in a position that seems to swap week by week, by beating St Kilda City by 59-32. They took the initiative early into this match and never let it go, controlling the wet ball better once the monsoon came in and defending strongly when they didn’t have it. Bentleigh on the other hand would have hoped for better than their 41-24 loss to Chelsea Heights. The Heighters have shown great improvement in recent weeks having regained some players that had previously been missing, and having upset Dingley last week they repeated the dose against a Bentleigh unit that were never in the hunt here.

Both sides have tricky runs home, with Mordialloc facing the rejuvenated Chelsea Heights and third-placed Dingley. Bentleigh, two points adrift, oppose Dingley and runaway leaders Heatherton. Chelsea Heights could yet finish level on points in fourth spot by beating Mordialloc and CPL, but the percentage gap may be too much to breach.

In the other Division 2 matches, St Pauls certainly didn’t have things their own way against CPL. They struggled to adapt to the damp conditions, pushing the pass and appearing to play dry weather netball and only leading by three at half time. Their second half was more encouraging, and the final margin of 34-23 looked comfortable enough. Heatherton remained unbeaten after thirteen matches, clinically disposing of Dingley. A 22-16 half-time lead laid the foundations for a third quarter blitz that put the verdict beyond doubt. A late Dingley rally added respectability to a 42-31 scoreline.

Black Rock hold fourth place in Division 3, but with them having to play second-placed Dingley and third placed St Kilda City before season’s end, Caulfield will be confident of taking their finals place from their grasp. The Jetballers missed the deluge this week, having the bye. St Kilda City missed the chance to go second with Dingley just a little too good, winning 37-31. Heatherton remained unbeaten, knocking over Skye, with Clayton and Caulfield recording solid wins.

The two Heatherton sides are the only ones assured of a finals place in Division 4. They both had wins this weekend, and play each other this coming week. Of the chasing pack, Dingley probably have the most comfortable run home, with South Yarra and Keysborough also chasing finals positions. South Yarra has a game in hand, to be played on Thursday night, which gives them a slight advantage, but with all three sides in decent form of late this one could go down to the wire.

Division 5 is also tight with only Black Rock and Heatherton in the top two slots safe. One win will see Bentleigh secure, and as they play sides outside the four in each of the last two rounds they will be favoured to go into August. There are many possible permutations here, but the St Kilda City clash against Dingley in Round 15 could well be a playoff for fourth spot, although Dandenong and Lyndhurst are still in with a chance.

The Division six finals are all but set, with Lyndhurst, South Yarra, Lyndale and Caulfield set to fight this division out. Caulfield would have to lose their last two matches and Clayton win theirs by comfortable margins for that to change, and as Caulfield finish against Hampton and Clayton against Lyndale, Caulfield would be red hot favourites. Clayton did keep their season alive this week with a gutsy 40-30 win over South Yarra, with other matches finishing as expected.

The top four have cleared right away in Division 7, with Heatherton, Mount Waverley, Bentleigh and Oakleigh District set to contest the big matches. All four tasted victory this weekend. Heatherton, Cheltenham and Keysborough were victorious in Division 8. The other finalist will be Dandenong, who were beaten by Cheltenham 33-26. The inaugural Under 19s finals will be contested between the two Dingley sides and the two teams from Mordialloc. As with other divisions, these teams have two further rounds to fine tune their games before the big matches roll around.