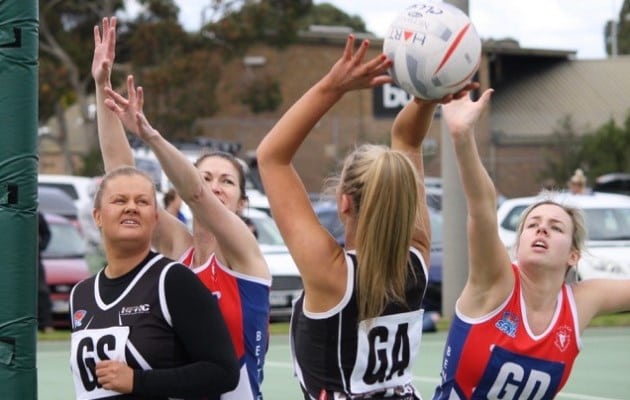 This loomed as a round in which, if the sides in the bottom half of the four were going to make their move, this was their time. And though Caulfield and Keysborough threw out their best challenge, it was the two sides at the top of the table that flexed their muscle.

It took 10 seconds for Dingley to hit the scoreboard against Keysborough. And although Abby Mackie equalised almost immediately, it was obvious that Dingley were switched on from the jump. Shae Wonnacott and Chelsea Goldin won a lot of ball in mid-court and used it well to give Sarah Fischer and Jess Payne a plethora of opportunities, and Dingley took an eight-goal lead to the first change. In the second quarter Amy Burns and Courtney Nash combined well to increase the supply to Mackie and Laura Agius, and Keysborough levelled the quarter. They made their charge in the third quarter to get within six, but the turning point came with Dingley scoring the last five goals of the stanza, and Dingley held Keysborough at arm’s length to emerge 49-35 winners.

Heatherton came out of the blocks at breakneck speed against Caulfield, looking to establish a lead early and inviting Caulfield to chase them. Caulfield started to control the ball well late in the game, but wilted under Heatherton’s defensive pressure, especially at the front of the goal circle, and with Rahni Samason not missing the lead at quarter time was 20-13. The trend continued in the second quarter, with Heatherton’s quick diagonal passing causing Caulfield’s defence headaches while Caulfield looked better when able to slow the tempo of the game. Into the second half Caulfield moved Brie Cooper forward while Heatherton did the same with Ella Batish, in an attempt to stretch their opponents for height, but while Caulfield were able to score readily they were unable to prevent Heatherton from replying in kind. The final score of 73-49 emphasised their superiority on the day.

St Kilda City took on Bentleigh at their local Peanut Farm courts and Bentleigh broke through for their first victory of the season. The win had been coming in truth – Bentleigh’s performances for some weeks have belied their lowly standing – and while play was fairly even in the middle of the court Bentleigh were by far the more clinical finishers. Bentleigh had set themselves for this clash, while some St Kilda players’ Friday night search for Pokemon did them few favours. The final score of 40-28 did not flatter the victors, who showed promise that there may be more wins where this one came from.

Heatherton showed exactly why they are unbackable favourites for the Division 2 flag with a crushing defeat of CPL. They were able to rest main shooter Bella Riddell in the first quarter but that didn’t cause them much heartache as they raced to a 17-6 quarter time lead. The pace and the pressure didn’t let up as the game went on, as CPL worked the ball forward in methodical fashion, only for Heatherton to pick them off and move the ball to the other end quickly and score. The final margin of 71-21 put a further scare on the rest of the division.

St Pauls in second place played a Mordialloc side keen to shore up their place in the four. There was very little space on offer for either side in the middle of the court, with the pressure exerted causing a lot of turnovers. This pressure lasted until half time, with St Pauls taking the narrowest possible margin to the main break, but it was the third term in which the decisive break was made. St Pauls stretched the lead to six almost without Mordialloc having a touch, and as the Reds attacked in trying to make up the deficit they left space for St Pauls to exploit, the final result being 50-42 in St Pauls’ favour.

Bentleigh took Mordialloc’s place in the four by defeating St Kilda City by a similar scoreline. Bentleigh certainly didn’t have this one all their own way after starting the match well. City gave their supporters plenty to be positive about, especially after half time. Finishing has been the problem for them in many games this season but now they started to convert their opportunities. For Bentleigh’s part they have shown that they are capable of matching the best of the division two sides on their day, and here they were good value for their eight-goal victory.

The match of the day came to court one where the improving Chelsea Heights took on third-placed Dingley. Chelsea Heights in recent weeks have started their matches strongly but haven’t always gone on with the job. Here they never looked like collapsing, and at no stage were Dingley given any peace by their tenacious opponents. Scores were close all day, and late in a pulsating last quarter Dingley drew level. It was here that the Chelsea Heights girls got their second wind and regained the lead. Dingley to their credit never gave up, but after a final quarter that seemed to go for ages it was Chelsea Heights that prevailed by the barest of margins, 39-38.

Division 3 went largely as expected this week, with three of the top four having convincing wins while the other, St Kilda City, had the bye. Caulfield’s loss to fourth placed Black Rock gives them a mountain to climb if they are going to play finals, while Heatherton and Dingley consolidated the top two places. Division 4 saw South Yarra move up to third, while Dingley drew level with Keysborough in fourth place. Heatherton’s two sides have a mortgage on the top two places.

The big upset of the day came in Division 5, where Dingley put in their best performance of the season to inflict just the second defeat of the season on Heatherton, by 34-29. This loss handed top spot to Black Rock, who comfortably accounted for Skye. St Kilda City missed the chance to tip Dandenong out of the four, having lost to a Bentleigh side that now draws level on points with Heatherton. Dingley also caused an upset in Division 6, with a solid win over third-placed Lyndale. Caulfield held fourth despite a loss to top placed Lyndhurst, while South Yarra consolidated second spot with a strong win over St Kilda City.

Bentleigh played brilliant netball in Division 7 to beat leaders Mount Waverley, and handed top spot to Heatherton in the process. Bentleigh stay third and Oakleigh Districts round out the four, their win against Doveton maintaining their two-win advantage over South Yarra in fifth. Division 8 is still all Heatherton and Cheltenham; each side being beaten but the once. Dandenong and Keysborough round out the four. Both Dingley sides had wins in the Under 19s, with Dingley Two leading the competition from Dingley One, Mordialloc One and Mordialloc Two.