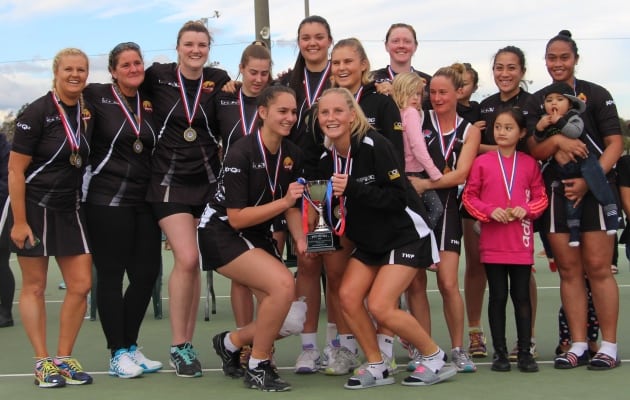 DVDs of the Division 1 and Division 2 Grand Finals are available to purchase. Email media@sfl.com.au for further details.

Listen back to Sunday's Netball Grand Final Radio Show, hosted by Ian Dougherty, Sophie O'Shea and Mel Aitkin, in the player below.

PODCAST: Click here to listen to the podcasts of the Division 1 and 2 Grand Final commentary as heard on 88.3 Southern FM.

Season 2016 has been run and won. Grand final day was a magnificent experience for all that watched it, with over 800 people attending the Rowan Road courts over the course of the afternoon. The dominant Heatherton club played in seven Grand Finals, and won the top three divisions, but it was heartening to see several clubs win their first ever premierships down the grades.

Heatherton played Dingley in the top division, trying to prevent a fourth straight Dingley Grand Final win. The first quarter of the match was as perfect for Heatherton as it was disastrous for Dingley. Heatherton’s stated aim was to come out swinging and break Dingley early, and at 12-2 half way through the term as Rahni Samason and Nat Billings took advantage of her side’s complete control of the centre court. Dingley got a little rhythm late in the quarter but a 21-9 quarter time advantage was decisive in the final wash-up.

Dingley pulled the margin back to eight in the first seven minutes of the second quarter as Alicia Wise, Sara Merkus and Nicki Tulley got some combinations working in the Dingoes’ best period of the match. The black and white defence, led by the excellent Kirsten Daley and Bayley Mifsud, weren’t standing for that though and allowed Heatherton to steady and lead 35-22 at the main break. From there everything had to go right for Dingley, but the first four goals of the second half for Heatherton put paid to their chances, and allowed them to go goal for goal from there.

The three-quarter time huddles with Heatherton having a 17-goal advantage were rather quiet affairs with Heatherton encouraging their players to enjoy the moment and Dingley looking to take something out of the game and move forward. Jess Payne and Sarah Fischer converted a few chances late on but Heatherton were too good on the day, and 67-46 was the final margin on the day. The best on court medal was awarded to Heatherton co-captain Zali Mifsud, and I would have liked to have seen her GPS as she covered every inch of the mid-court. Heatherton only lost one match for the season, and were very worthy of the premiership mantle. The Division 2 grand final was one heck of a battle, and was as unexpected as the Division 1 match, albeit in a very different way. For Heatherton’s second side has been as dominant as their first, only losing once to their grand final opponents St Pauls. Here it was St Pauls that were out of the blocks like lightning, moving the ball swiftly and surely and feeding quality possession to their excellent shooters Grace Healey and Eliza Barnes. When Heatherton went on attacking raids they were thwarted by the Saints led by intercepting defender Alex Ball. A 16-10 quarter time lead may have been unexpected before the game began, but St Pauls drew confidence from their effort. Heatherton threw everything they had at St Pauls, and Bella Riddell was in fine shooting form, but at the other end Barnes and Healey just did not miss, keeping the Saints in front.

The turning point may well have come in the first minute of the third quarter, when a contested ball left Heatherton’s inspirational skipper Nicki Arnold with a game-ending shoulder injury. Mandy Quinn was thrust into the pivot and played the game of her life, covering great distance and controlling the play brilliantly. Still St Pauls turned for home six goals to the good and looking for all the world like champions, but if this game was over someone forgot to tell the Heatherton girls. The defensive pairing of Belinda Kay and Kirsty Mann really stood up, Bella Riddell and Sophie Clark shot the lights out at the other end, and two minutes from time Heatherton took the lead, which they held to close out victory by 45-41. Mandy Quinn’s mid-court efforts won her best on court honours. Division 3 was another brilliant contest from beginning to end. Heatherton started the stronger over their Dingley opponents, opening up a 10-6 lead at quarter time, but Dingley turned that around in the second quarter to lead by one at the long break. The defensive divisions played brilliantly in the third term, with Heatherton’s Erin Naismith and Alex Riddell, and Dingley’s Eleanor Douglas making their opponents work for every goal. Dingley led by two at the last change, but that deficit was wiped off in the opening minute of the fourth quarter. From there it was goal for goal until the last three minutes, when Heatherton took a two goal lead that they held until the final siren. 35-33 was the final score. Heatherton attacker Bubba Ashin was a deserving best on court after a game in which she never stopped working and was a constant danger to the Dingley defence. Division 4 saw South Yarra make the early running against the young and agile Heatherton White. The obvious task for South Yarra was to shut down crack shooter Chelsey McAndrew, which they did well by making sure that the ball didn’t breach the goal circle, leading 10-5 at the first break which was extended to 18-12 at half time with defences still on top. Heatherton started to make their charge in the third quarter but South Yarra stood strong to lead at three-quarter time by four. In a brilliant quarter of netball Heatherton threw everything bar the kitchen sink at their opponents, and level at 24-24. Both sides had their chances, and with another couple of minutes on the clock it could all have been different, but at the final siren South Yarra held sway by the narrowest of margins, 29-28. The inspirational and combative Kristina Stewart may have finished on the wrong side of the scoreboard, but was the worthy recipient of the best-on-court medal. Black Rock were very impressive in hauling in an early lead in their Semi Final against Heatherton. Two weeks later Heatherton went in level at quarter time, but that’s as close as they got as the Jetballers assumed control and extended their lead to five at half time and nine at three-quarter time. The much-vaunted Black Rock defence centred around Bec Goodear, Sarah McCormack and Sarah Rayment had been in a very frugal mood throughout the afternoon. Now in the last quarter they tightened the screw even further while their shooters further up the court began to score at will, and a score of 48-30 brought premiership glory to the red and black. For her defensive prowess and calm leadership, Bec Goodear was named best on court. Caulfield had shown bags of heart and determination in coming from the Elimination Final to the Grand Final, but this was a bridge too far for the gallant Bears. Lyndhurst were out of the blocks like a shot, and led by nine before Caulfield found their bearings. The Bears countered with three straight just before the first break but the Lightning steadied to lead 17-9 at quarter time. That lead proved decisive as Lyndhurst’s lead was eleven at both the half and three-quarter time breaks. Caulfield showed their tenacity by winning the last quarter but it was Lyndhurst that triumphed to take their first silverware in their first season in the SFNL. Solid, organised defender Melissa Lanyon led all comers to be crowned best on court. Heatherton were also fancied in Division 8 against Cheltenham having only been beaten once, and started like it, leading 13-8 at the first change and looking dangerous from all over the court, but Cheltenham flew at them in the second quarter. Heatherton were kept to just three scores for the quarter while Cheltenham took the lead by half time. The third term was a cut-and-thrust affair with Cheltenham taking the merest advantage into the final quarter, but what a cracker that final quarter was! Cheltenham got out to a 32-26 lead, which was levelled at 33-33. It was Cheltenham that were strongest in the crucial last few minutes, drawing away to a 36-34 victory. Lauren Geschke in defence was named best on court. Under 19s was an all-Dingley affair, but any notion of any backing off during this game was dispelled very early in the piece, as both sides left no doubt that they wanted this premiership. Dingley Two were undefeated throughout the season, and showed their supremacy early in this match, leading by five at the first change and doubling that advantage by half time. Dingley One rallied after half time but could make no impression, and Dingley Two finished victorious by 40-27. Tall defender Gemma Reynolds was dominant throughout the day, and quite rightly was adjudged best on court.