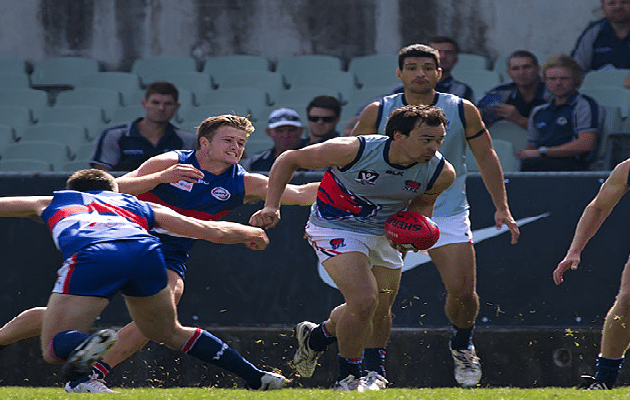 Tweet
The Western Region FL has out-muscled the Southern FL to claim Game 1 of the Metro Championships.


A five-goal onslaught either side of half time proved the difference as the boys from the West powered to a 36-point win.

Losing key backs Nathan Stewart to a heavy knock and Luke Crozier to a hamstring injury proved a challenge too great for the Southern FL to overcome in the 5v6 play-off..

WRFL’s bevy of talented smalls shone, with Lee Spiteri (Altona) winning the best-on-ground medal and receiving plenty of support from Tim Jenkins and Kwame McHarg. The trio, along with key forward Mitch Turnbull, all booted two goals to help their side progress to the 3v4 play-off in 2015.

Captain Jason Cloke was another key contributor across half back, while the silky skills of Brad Sutcliffe were on display throughout.

For the SFL it was East Brighton’s Damien Rayson who led the resistance, winning plenty of ball through the middle and kicking two monster goals.

With fans still filtering in to Visy park, it was a somewhat subdued opening with both team struggling to find their feet.

Turnovers and poor kicking in front of goal meant that neither team was able to gain any real ascendancy, although it was the WRFL that appeared the surer by hand and foot.

Things appeared on a similar course in the second term until the Western Region FL sprang to life.

A thumping goal from Damien Rayson had pulled the Southern FL league within two straight kicks but it seemed to spark the boys from the West.

Spiteri found space in the forward 50 to ram one home and his effort was quickly followed by goals to Steven McAnulty and Jenkins. The St Albans small man was one of the stars of the first half with run and carry providing plenty of headaches for the SFL hierarchy.

Another to impress was Deer Park’s McHarg whose defensive pressure created plenty of opportunities for his fellow forwards.

The three late goals had split the game open and helped the WRFL to a 26-point lead at the main break.

McHarg’s work was rewarded in the third term with his second goal telling as the WRFL took complete control of the match.

The boys in blue spent almost the entire first half of the quarter in attack and when Jordan Robbins slotted a booming goal, the margin was suddenly out to 45 points.

But just as a white wash loomed, SFL hit back with their best period of the game, kicking two goals and moving the ball with much greater efficiency.

Despite the increase in intensity, SFL remained 37 points adrift at the final change and needing a miracle to get back into the contest.

The WRFL cast aside any doubts over the result with Jenkins getting forward to kick one of the goals of the day in the opening minute of the quarter. With two opponents to beat at the fall of the ball, he sold some candy before stepping inside and casually slotting his second major from 15m out.

Spiteri’s second a short time later secured the BOG award and the only question was how much?

But showing great pride, the SFL refused to quit and bagged three of the last four goals to reduce the final margin to 36 points.