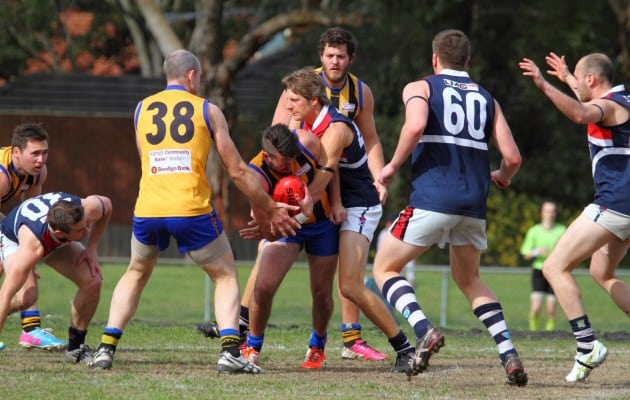 Will it be Hammer time at the Kennel?

Division 1 – Round 11 Preview
With Good Will Hunter

With the battle for finals places intensifying, expect some fiercely-contested matches this weekend.

Clayton V St Pauls (Meade Reserve)
This is a massive game in the context of season 2015 as both of these sides are 5-5 and still in finals contention. A classic eight-pointer, a win for either side will vastly improve their chances of seeing September action. Clayton have only beaten the bottom-four teams this year, and have lost to both the top two sides by 100+ points, which suggests they are well off the pace-setters. After a slow start to the season St Pauls have now won their past three games and are hitting their straps at just the right time. I’m tipping the Doggies to win comfortably.

Mordialloc V Cheltenham (Ben Kavanagh Reserve)
Cheltenham has been disappointing in recent weeks and after three consecutive losses their finals hopes are suddenly on shaky ground. Rolling Mordialloc at home would be a huge scalp, and could be just the sort of confidence-boosting win needed to reignite its floundering season. But Ben Kavanagh Reserve has been a graveyard for visiting clubs this year as Mordi remains unbeaten on their home turf. The Bloods are in terrific form and will easily account for the Rosellas.

East Malvern V Chelsea Heights (Dunlop Reserve)
It has certainly been the season from hell for the Heighters and the wooden spoon seems destined for Beazley Reserve after yet another demoralising loss. East Malvern has tasted victory just once in the past month and they will be desperate to arrest the form slump that threatens to derail their season. But I can’t see them losing this one, and a big win at home could be just what they need to turn their fortunes around.

East Brighton V Bentleigh (Hurlingham Park)
The Demons suffered yet another heartbreaking defeat last week and that just about sums up their year. They’ve been highly competitive, but not quite good enough when to challenge the top sides. Another big test looms this week as they face an East Brighton outfit coming off just their second loss for the year. The Vampires will be too good, but the Demons will be far from disgraced.

St Kilda City V Dingley (Peanut Farm)
St Kilda City’s surprise victory last Saturday sees them leapfrog Bentleigh into eighth spot and all but guarantees they will avoid relegation. Up the other end of the table, Dingley are sweeping all before them after a second consecutive win over the 2014 premiers. Their narrow loss to Mordialloc in round three is now a distant memory and they are looking nigh on unbeatable at the moment. This will be a case of how far the Dingoes.

Division 2 – Round 11
With Jason Barbin

Round 11 brings some interesting games to the table with plenty of ladder positions on the line.

Murrumbeena vs Keysborough (Murrumbeena Park)
Keysborough won comfortably the last time these two side played but the Beena have made significant improvements since then and will be tough to beat at home. While they don’t have a dominant forward, Murrumbeena get solid contributions in front of goal from several players. Tyson King is back to his best for Keysborough and though the smaller ground may not suit them I think they will get over the line.
Keysborough by 19 points

Doveton Eagles vs Caulfield (Power Reserve)
The Bears will be looking to bounce back after last week’s disappointing loss to Heatherton at home. They travel to Doveton to take on an Eagles side that will be looking to fight their way off the bottom of the ladder. The Eagles have improved despite the loss to Keysborough and will be keen to get a second win on the board. Bears should be able to bounce back here.
Caulfield by 30 points

Oakleigh District vs Springvale Districts (Princess Highway Reserve)
Oakleigh will be keen to bounce back after its loss to Skye but they take on a confident Springvale side after its upset win over Highett. Oakleigh have the firepower to win this one comfortably but David Velardo hasn’t been in the best of form over the last couple of weeks and will be looking to hit the scoreboard. Oakleigh should take out this battle of the districts.
Oakleigh Districts by 39 points

Heatherton vs Skye (Ross Street Reserve)
Both teams will be choc full of confidence after big wins against top sides last week but the question will be which team can back it up this week. Skye have been one of the best sides over the last two years and despite being undermanned, they should have the firepower both up forward and down back to get over the line against an improved Heatherton unit.
Skye by 24 points

Highett vs Hampton (Turner Road Reserve)
Another game featuring two sides looking to bounce back after disappointing losses. Both sides will have pencilled in last week’s games as should wins and after failing to do so they will come out firing in a bid to strengthen their position in the finals race. Hampton is the better team on paper but hasn’t always played like it so expect this game to be tough.
Hampton by 11 points

Division 3 – Round 11
With Andrew Paloczi

Looking forward to round 11, a couple of matches promise to be enthralling encounters.

South Yarra vs Moorabbin (Fritsch Holzer Park)
South Yarra is building momentum and has won three matches in a row. Playing at home, the Lions are in with a genuine chance against the powerful Moorabbin side. The Kangaroos are expected to win, but if their inspirational captain Matthew Johansson can be contained, South Yarra’s hopes will rise. Trent Davey is another in-form forward for the Kangaroos and they should get the job done by a few goals, but it is far from a certainty.

Carrum Patterson Lakes vs Black Rock (Roy Dore Reserve)
This should be a beauty as Black Rock looks to bounce back from a narrow defeat, this time visiting the home turf of Carrum Patterson Lakes. The Jets played a fiercely contested match in round 10, whilst the Lions were forced to arrange an intra-club match. It is a real test for the Jets as they continue to adjust to life without forward Tom Dewar, who is sadly out for the season with an ACL injury. Still, Black Rock has been so good this season it deserves to start as a narrow favourite and will win by a few points.

Lyndale vs Ashwood (Barry Powell Reserve)
Tipping Lyndale’s matches is fraught with danger. Despite being the away team, Ashwood is a strong favourite, but if the Pumas are at their best they may make the Magpies work harder than expected.

Endeavour Hills vs Dandenong (Barry Simon Reserve)
It is difficult to see the visiting Dandenong team presenting a serious threat to Endeavour Hills. This game should be the Falcons’ fourth win in a row and is set to be a handy percentage booster.

Hallam vs Mount Waverley (Hallam Reserve)
Mount Waverley will be disappointed after a defeat and is sure to make life unpleasant for home team Hallam. Despite the Hawks’ plucky nature, it would be optimistic to tip a Hallam win. Mount Waverley should win by at least 10 goals.

Sandown has a bye this week due to Southern Dragons exiting the competition.